The Labor Department reported that there were 128,000 jobs added in October, despite the GM strike, which reduced the jobs count by about 50,000.  This beat the consensus estimate of 75,000 and marked the 109th consecutive month of job gains. Excluding the drop in auto-related jobs, payrolls were up by a strong 170,000 positions. 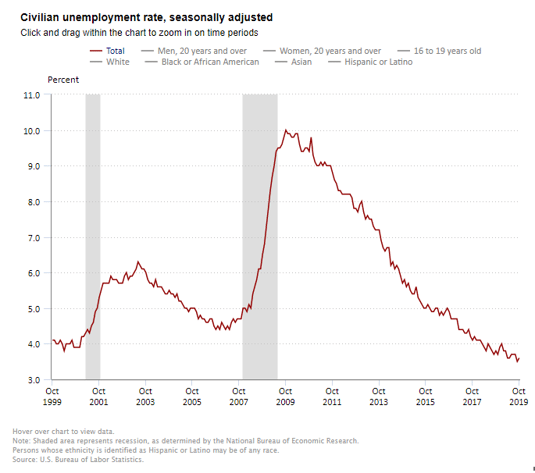 Revisions also added a significant number of new jobs to the prior two months.  The change in total non-farm payroll employment for August was revised up by 51,000 from 168,000 to 219,000 and the change for September was revised up by 44,000 from 136,000 to 180,000.  Combined, an additional 95,000 jobs were added to original estimates.   Monthly revisions result from additional reports received from businesses and government agencies since the last published estimates and from the recalculation of seasonal factors.  After revisions, job gains have averaged 176,000 over the last three months.

For the ten months through October, the average monthly increase in total employment has been 167,000, below the average monthly gain of 223,000 in 2018 (note that this will likely be revised down based on the recent preliminary benchmark revision estimate which indicates that private payrolls were over-counted by 43,000 per month in the twelve months ending in March 2019).  Health care added 15,000 jobs, and has added 402,000 jobs in the last 12 months.

The October unemployment rate inched up 10 basis points to 3.6%, still near a 50-year low.  A broader measure of unemployment, which includes those who are working part time but would prefer full-time jobs and those that they have given up searching—the U-6 unemployment rate—rose to 7.0% from 6.9%.

The labor force participation rate, which is a measure of the share of working age people who are employed or looking for work was little changed at 63.3% in September, very low but up from its cyclical low of 62.3% in 2015.  The low rate at least partially reflecting the effects of an aging population.

The October employment report will support the Fed’s recent indications that it will hold off on further rate reductions unless there is new evidence of a weakening economy.

Earlier this week on October 30th, the Federal Reserve lowered interest rates by 25 basis points to a range between 1.50% to 1.75%.  This was the third cut in as many months.  But Chairman Powell indicated that it may be the last cut, at least in the short term.  In his opening remarks, the Chairman emphasized that the baseline outlook for the economy remain positive, helped by the recent cuts in interest rates.  He also said the Fed “will continue to monitor the implications of incoming information for the economic outlook as it assesses the appropriate path of the target range for the federal funds rate.”   This suggests that the Fed will not cut rates further at its next FOMC meeting in December unless upcoming economic indicators show a slowing economy.

Wednesday’s rate decrease should push down borrowing costs for credit cards, home equity lines of credit, auto loans and adjustable-rate mortgages but also hurt savers in the economy such as seniors and others on fixed incomes.

Its notable that interest rates have now fallen 75 basis points since July and equate to about a third of the Fed’s nine rate hikes from late 2015 through last year.  They also equal the reductions in rates the Fed enacted in the 1995-96 periods and in 1998.