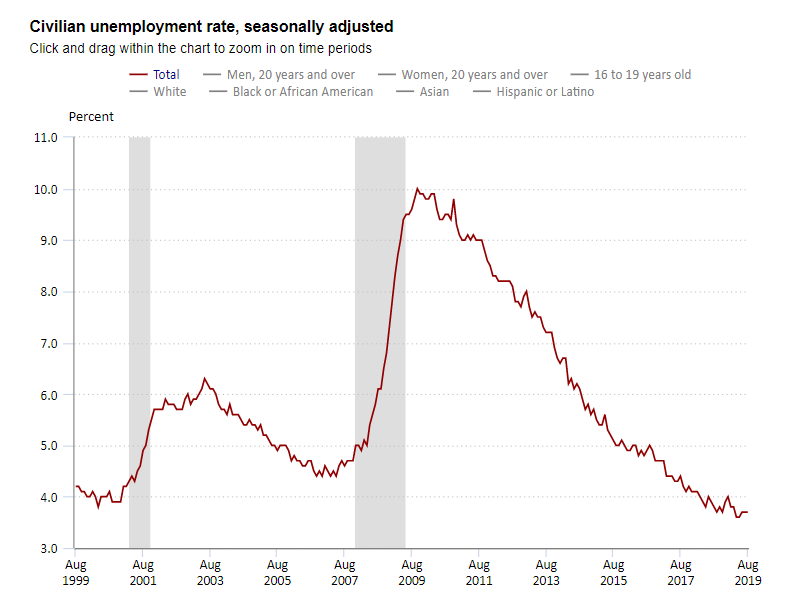 Revisions subtracted 20,000 to the prior two months.  The change in total nonfarm payroll employment for June was revised down by 15,000 from 193,000 to 178,000 and the change for July was revised down by 5,000 from 164,000 to 193,000.   Monthly revisions result from additional reports received from businesses and government agencies since the last published estimates and from the recalculation of seasonal factors.

The August jobs report has garnered special attention since there are broad-based concerns about a slowing national economy amid signs of a weakening manufacturing sectors, slowing business investment and trade-related weakness associated with rising tariffs.  In fact, the Fed lowered interest rates on July 31st for the first time since 2008 as it reacted preemptively to concerns of a potential economic slowdown.  For several months, concerns about trade wars and slowing growth in Europe, China and the U.S. have been on the radar screen of the Fed.  Federal Reserve Chair Jerome Powell said the cut was “intended to ensure against downside risks from weak global growth and trade tensions.” The move is being labeled an “insurance cut” because it is meant to keep the economy’s engine pumping.  The fed funds rate is now targeted at a range of 2% to 2.25%, down 25 basis points from its prior target range. Until July and since late 2015, the Federal Reserve had been gradually raising rates following six years of virtually 0% interest rates (2009 through 2015).  The August jobs report is likely to add pressure to the Fed to lower rates further at its upcoming September 18th FOMC meeting.

The August unemployment rate was unchanged at 3.7%.  This is still close to the lowest rate in 50 years.  A broader measure of unemployment, which includes those who are working part time but would prefer full-time jobs and those that they have given up searching—the U-6 unemployment rate—rose to 7.2% from 7.0%, reversing a July drop. 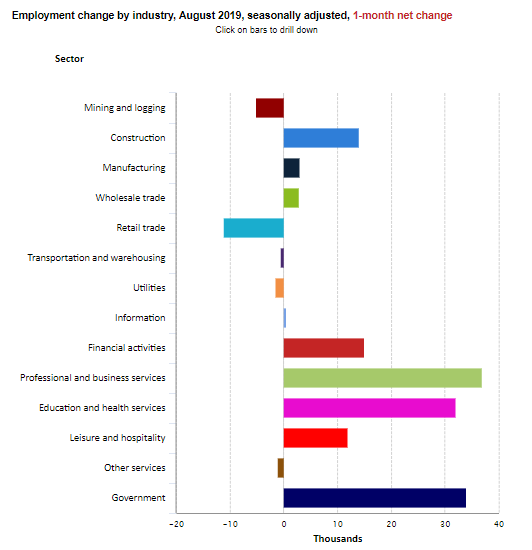 The labor force participation rate, which is a measure of the share of working age people who are employed or looking for work was unchanged at 63.2% in August, very low but up from its cyclical low of 62.3% in 2015.  The low rate at least partially reflecting the effects of an aging population.