The Labor Department reported that there were 145,000 jobs added in December. This was less than the consensus estimate of 160,000 and marked the 111th consecutive month of job gains. For all of 2019, employers added 2.11 million jobs. That was a slowdown from the increase of 2.68 million in 2018 and ranked 2019 eighth for job growth in the past 10 years.

Revisions also subtracted a number of jobs to the prior two months. The change in total nonfarm payroll employment for October was revised down by 4,000 from 156,000 to 152,000 and the change for November was revised down by 10,000 from 266,000 to 256,000. Combined, 14,000 jobs were subtracted from the original estimates. Monthly revisions result from additional reports received from businesses and government agencies since the last published estimates and from the recalculation of seasonal factors. After revisions, job gains have averaged 184,000 over the last three months, below the average monthly gain of 223,000 in 2018 (note that this will likely be revised down based on the recent preliminary benchmark revision estimate which indicates that private payrolls were over-counted by 43,000 per month in the twelve months ending in March 2019). 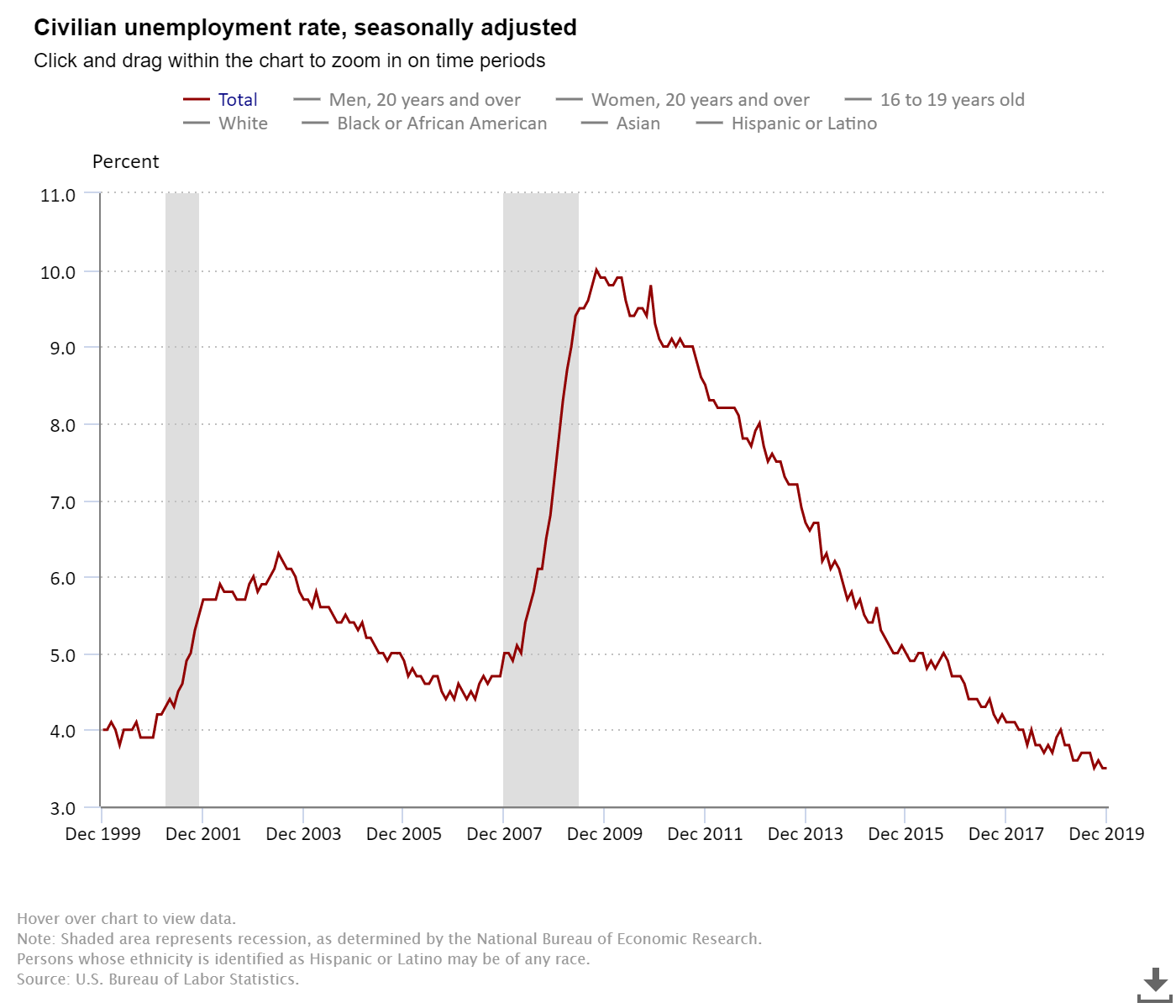 The December unemployment was unchanged at 3.5% in December, a 50-year low. Average hourly earnings for all employees on private nonfarm payrolls rose in December by three cents to $28.32. Over the past 12 months, average hourly earnings have increased by 2.9%. For 2018, the year over year pace was 3.0% and in 2017 it was 2.6%. Reasons why wages are not growing faster include the retirement of highly paid baby boomers and relatively weak productivity growth.

The labor force participation rate, which is a measure of the share of working age people who are employed or looking for work was unchanged at 63.2% in December, which was the highest since August 2013.

The December employment report will support the Fed’s “on hold” stance, at least for the time being. In December, the Federal Reserve left interest rates unchanged and signaled it would stay on hold through 2020, keeping the Fed and its policies on the sidelines during the election year. “Our economic outlook remains a favorable one despite global developments and ongoing risks,” Chairman Jerome Powell told a press conference in mid-December following the FOMC meeting in Washington. He continued that “As long as incoming information about the economy remains broadly consistent with this outlook, the current stance of monetary policy likely will remain appropriate.” 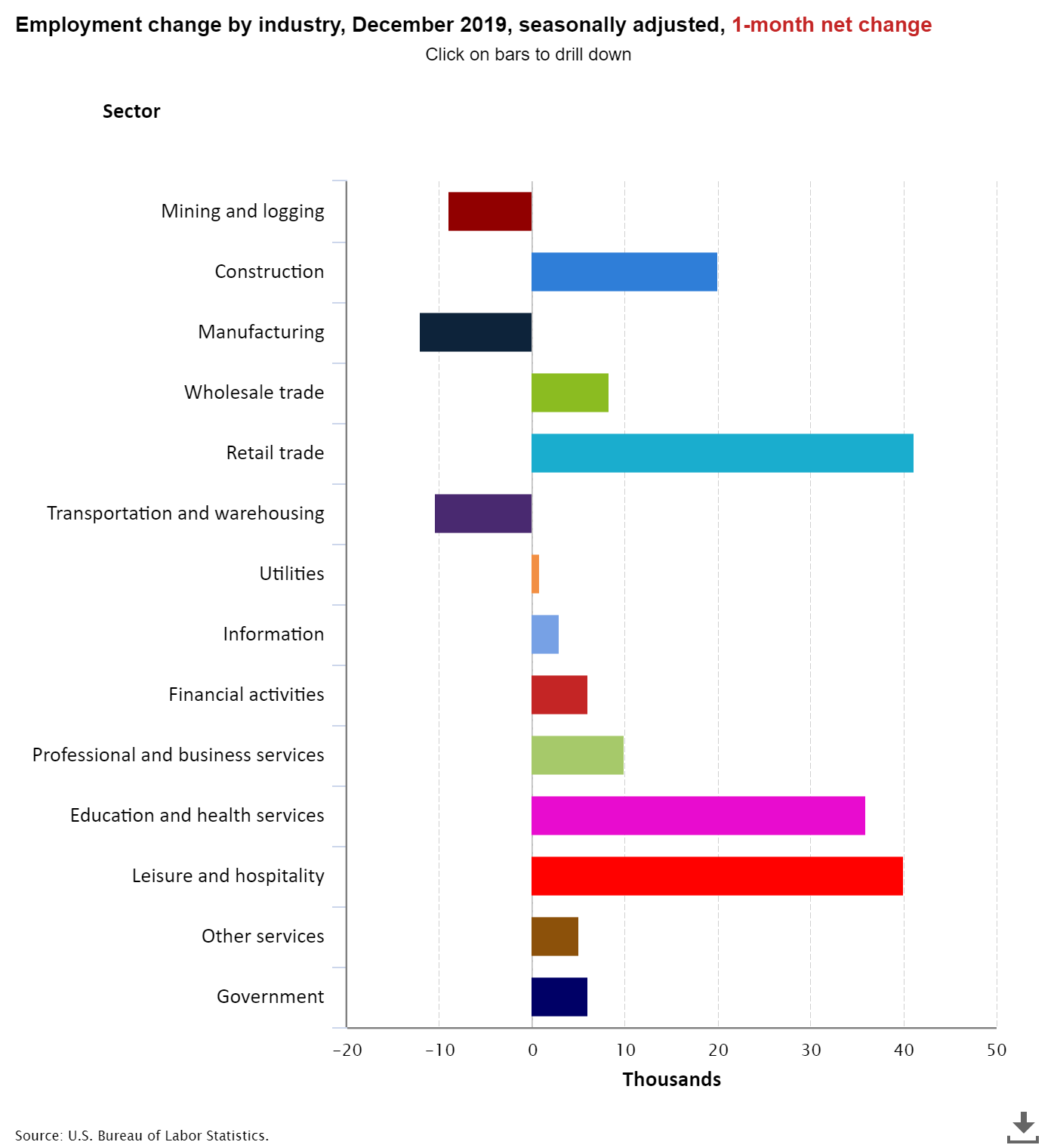 In October, the Federal Reserve lowered interest rates by 25 basis points to a range between 1.50% to 1.75%. This was the third cut in as many months. But Chairman Powell indicated that it may be the last cut, at least in the short term, creating the “on hold” stance viewed by many in the market.
Fed officials also released new quarterly forecasts. These showed:

Beth Burnham Mace is the Chief Economist and Director of Capital Markets Research at the National Investment Center for the Seniors Housing & Care Industry (NIC). Prior to joining the staff at NIC, she served as a member of the NIC Board of Directors for 7 years and chaired NIC’s Research Committee. Ms. Mace was also a Director at AEW Capital Management and worked in the AEW Research Group for 17 years. While at AEW, Ms. Mace provided primary research support to the organization’s core and value-added investment strategies and provided research-related underwriting in acquisition activity and asset and portfolio management decisions. Prior to joining AEW in 1997, Ms. Mace spent ten years at Standard & Poor’s DRI/McGraw-Hill as the Director of the Regional Information Service with responsibility for developing forecasts of economic, demographic, and industry indicators for 314 major metropolitan areas in the U.S. Prior to working at DRI, she spent three years as a Regional Economist at the Crocker Bank in San Francisco. Ms. Mace has also worked at the National Commission on Air Quality, the Brookings Institution and Boston Edison. Ms. Mace is a member of the National Association of Business Economists (NABE), ULI’s Senior Housing Council, the Urban Land Institute and New England Women in Real Estate (NEWIRE/CREW). In 2014, she was appointed a fellow at the Homer Hoyt Institute and was awarded the title of a “Woman of Influence” in commercial real estate by Real Estate Forum Magazine and Globe Street. Ms. Mace is a graduate of Mount Holyoke College (B.A.) and the University of California (M.S.). She has also earned The Certified Business Economist™ (CBE), which is the certification in business economics and data analytics developed by NABE. The CBE documents a professional’s accomplishment, experience, abilities, and demonstrates mastery of the body of knowledge critical in the field of economics and data analytics.