The U.S. Bureau of Labor Statistics reported that nonfarm payrolls rose by 261,000 in October 2022 and the unemployment rate rose 0.2 percentage point to 3.7%. The October increase was well below the year-to-date average of 407,000 and below the monthly average of 562,000 seen in 2021. The monthly gain paints an image of a still growing, but slowing, labor market. For perspective, in 2019, job gains averaged 164,000 per month. Revisions added 29,000 positions to total payrolls in the previous two months. 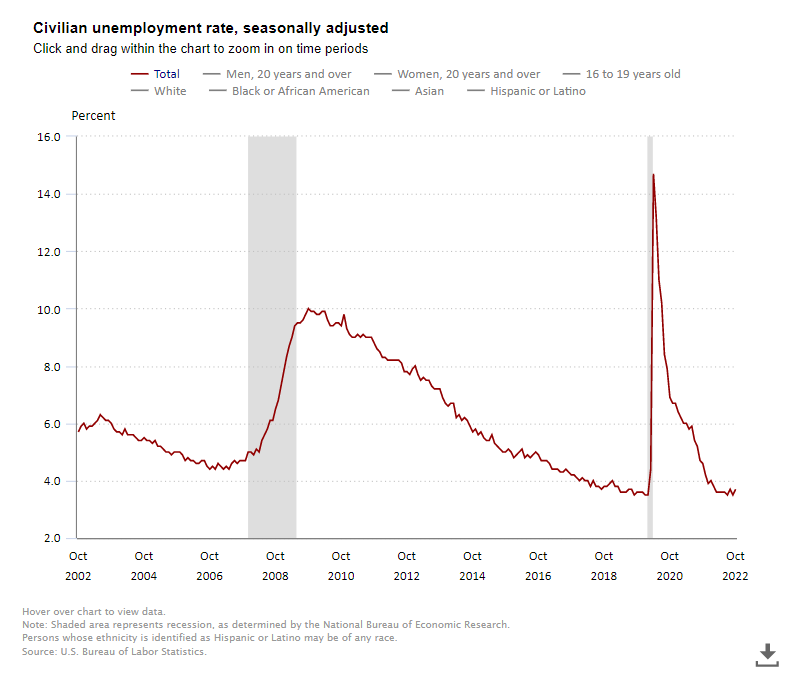 Today’s labor report is not likely to affect the Fed’s view on the economy. It is looking for the job market to slow further and the inflation rate to be tempered before it will adjust its aggressive stance on monetary policy. In his statement on Wednesday, Federal Reserve Chair Jay Powell said “The broader picture is of an overheated labor market where demand substantially exceeds supply …. I don’t see the case for real softening just yet.”

The Federal Reserve raised short-term interest rates for the sixth time this year on Wednesday, November 2nd. This marked the fourth consecutive 0.75 percentage point increase and followed earlier increases in 2022 of lesser amounts. The latest increase pushed the Fed Funds rate to a range of 3.75% to 4.00%, up from 0% at the beginning of the year. The rapid rise in interest rates is the most aggressive pace of monetary policy tightening since the early 1980s and is in response to inflation which remains near a 40-year high by most measures. In its announcement of higher interest rates, Powell said that when the Fed considers future interest rate increases, it “will take into account the cumulative tightening of monetary policy, the lags with which monetary policy affects economic activity and inflation, and economic and financial developments.” This may suggest smaller increases in rates at its final 2022 meeting in December and going into January. But Powell also said that “The (FOMC) Committee anticipates that ongoing increases in the target range will be appropriate in order to attain a stance of monetary policy that is sufficiently restrictive to return inflation to 2 percent over time …. We still have some ways to go and incoming data since our last meeting suggests that the ultimate level of interest rates will be higher than previously expected,” he said.

In a separate survey conducted by the BLS, the jobless rate rose 0.2 percentage point to 3.7% in October. In September, the jobless rate had once again fallen to its pre-pandemic level of 3.5% seen in February 2020. Both months’ unemployment rates are well below the 14.7% peak seen in April 2020. 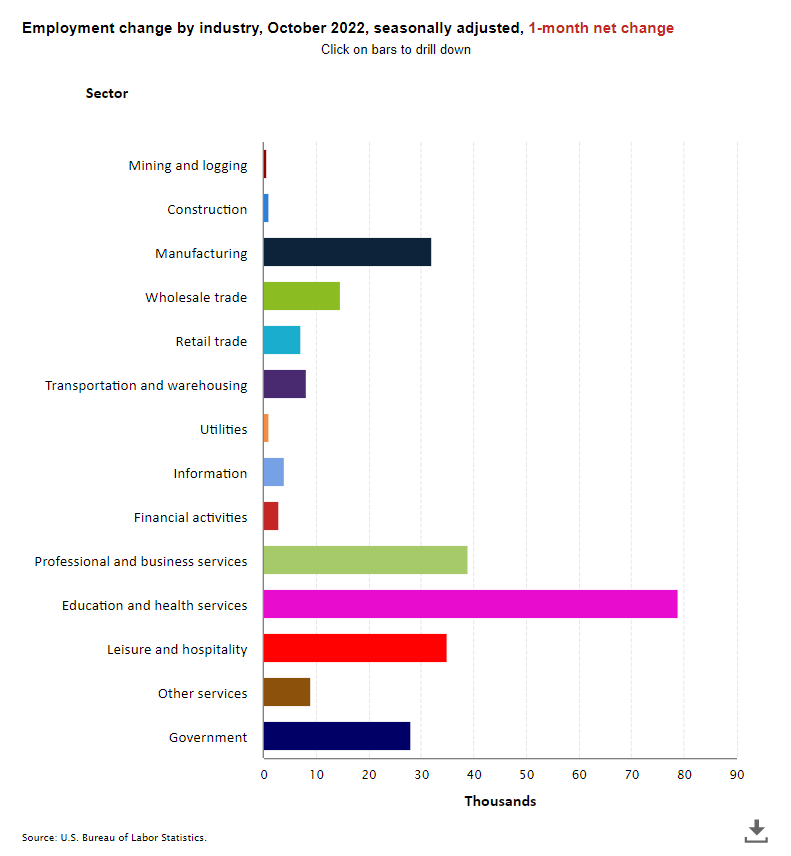 Earlier this week, the BLS released its JOLTS report that showed the number of job openings rose to a seasonally adjusted 10.7 million in September from 10.3 million in August. That was below the peak of 11.9 million in March, but still well above their pre-pandemic level in early 2020 when it averaged 7.0 million. This means that there are roughly 1.9 open positions for every person looking for work in September, up from 1.7 in August. The hirings rate did fall according to the JOLTS survey as did the quits rate, indications that the labor market is slowing a bit.