The Labor Department reported that there were 266,000 jobs added in November.  This beat the consensus estimate of 187,000 and marked the 110th consecutive month of job gains.  The return of 41,000 striking workers to their jobs at General Motors helped boost this month’s gains. Even excluding the effect of the strike, payrolls were still up by a strong 225,000 in November. 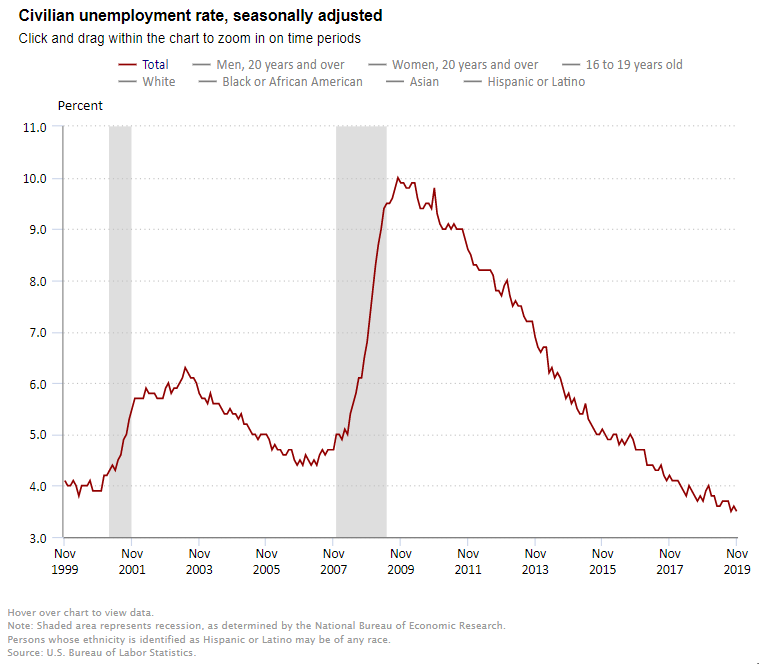 Revisions also added a significant number of new jobs to the prior two months.  The change in total non-farm payroll employment for September was revised up by 13,000 from 180,000 to 193,000 and the change for October was revised up by 28,000 from 128,000 to 156,000.  Combined, an additional 41,000 jobs were added to original estimates.   Monthly revisions result from additional reports received from businesses and government agencies since the last published estimates and from the recalculation of seasonal factors.  After revisions, job gains have averaged 205,000 over the last three months, below the average monthly gain of 223,000 in 2018 (note that this will likely be revised down based on the recent preliminary benchmark revision estimate which indicates that private payrolls were over-counted by 43,000 per month in the twelve months ending in March 2019).  Health care added 45,000 jobs, and has added 414,000 jobs in the last 12 months.

The November unemployment rate slipped back to 3.5% in November, returning to a 50-year low from 3.6% in October.  Average hourly earnings for all employees on private nonfarm payrolls rose in November by seven cents to $28.29. Over the past 12 months, average hourly earnings have increased by 3.1%.  For 2018, the year over year pace was 3.0% and in 2017 it was 2.6%.  Reasons why wages are not growing faster include the retirement of highly paid baby boomers and relatively weak productivity growth.

The labor force participation rate, which is a measure of the share of working age people who are employed or looking for work was 63.2% in November, down from 63.3% which was the highest since August 2013. The overall rate has recently been supported by the return of nearly 1.7 million workers to the labor force over the past year. 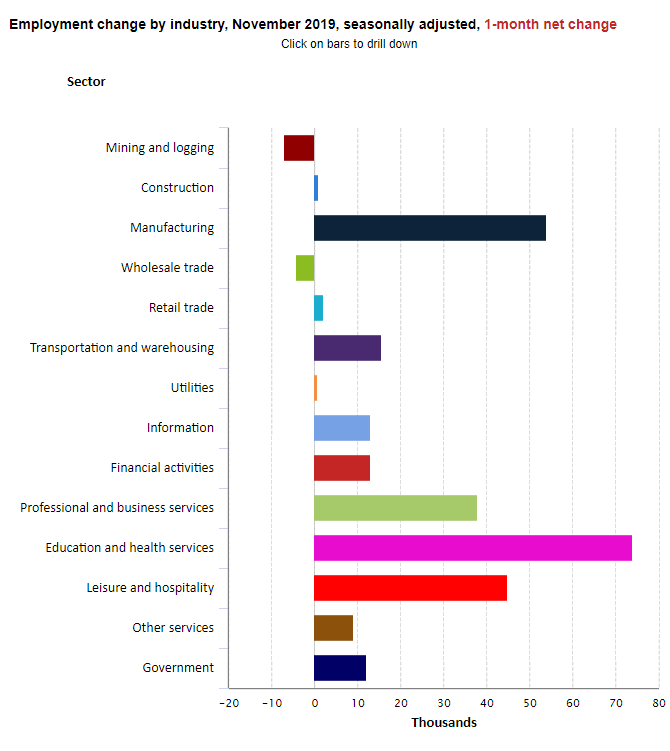 The November employment report will support the Fed’s “on hold” stance, at least for the time being.  In late October, the Federal Reserve lowered interest rates by 25 basis points to a range between 1.50% to 1.75%.  This was the third cut in as many months.  But Chairman Powell indicated that it may be the last cut, at least in the short term, creating the “on hold” stance viewed by many in the market.  In recent comments, the Chairman has emphasized that the baseline outlook for the economy remains positive, helped by the recent cuts in interest rates.  He has also said that the Fed “will continue to monitor the implications of incoming information for the economic outlook as it assesses the appropriate path of the target range for the federal funds rate.”   This suggests that the Fed will not cut rates further at its next FOMC meeting in December.