CCRCs offer multiple care segments (at a minimum independent living and nursing care) typically by a single provider on one campus. This analysis breaks the care segment types apart from the CCRC community type that NIC MAP includes under the main category of seniors housing. Care segment type refers to each part or section of a property that provides a specific level of service, i.e., independent living, assisted living, memory care or nursing care. The following analysis examines current conditions and year-over-year changes in inventory, occupancy, and same store asking rent growth—by care segments within CCRCs (CCRC segments) compared to non-CCRC segments in freestanding or combined communities to focus a lens on the relative performance of care segments within CCRCs.

The wide discrepancies in occupancy rates during the COVID-19 pandemic are varied. They can be explained, in part, because new CCRC residents are generally healthier than residents in other types of seniors housing resulting in lower resident turnover in CCRCs. CCRCs also typically have larger campuses and differentiated residential environments separated by care segment—which may allow operators to mitigate spread of the virus by protecting more vulnerable populations in autonomous settings. Additionally, the contract stipulations of entrance fee CCRCs, which tend to be varied and unique, may attract retirees who may have been less inclined to move out during the pandemic. A special report from NIC’s Executive Survey Insights, regarding CCRC performance for two time periods during pandemic (March 24-April 12 and April 27-May 24) from owners and C-suite executives of operators of seniors housing and care properties across the country, can be found here for additional insights regarding move-in and move-out rates, and changes in occupancy. 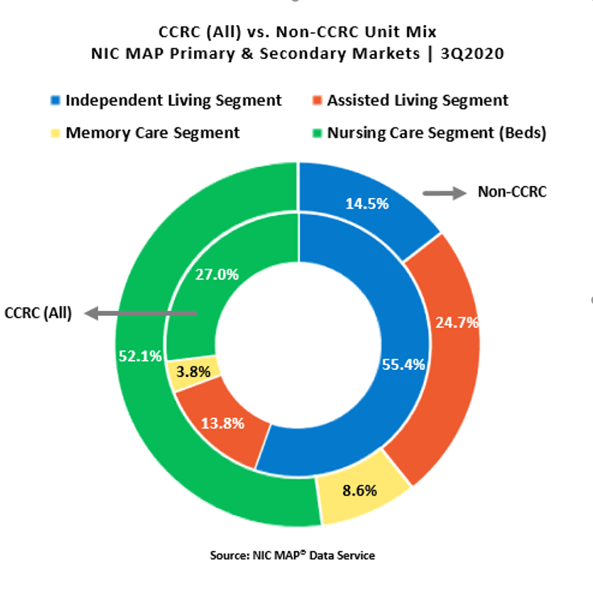 CCRCs vs. Non-CCRCs in Detail

The CCRC independent living care segment (which represents 55.4% of CCRC units) garnered the highest occupancy in the third quarter of 2020 (90.4%), as well as the least drop in occupancy year-over-year, falling 2.2 percentage points. The current nursing care segment occupancy rate in non-CCRCs, which represents 52.1% of non-CCRC units, was much lower at 75.5%, and fell 10.4 percentage points year-over-year.

The table below compares each of the care segments—independent living, assisted living, memory care and nursing care—in the Primary and Secondary Markets. The table shows the 3Q 2020 total open units, occupancy and average monthly asking rent—and year-over-year changes for CCRCs and non-CCRCs.

Regional Occupancy Differences are Highest in the Mid-Atlantic, Northeast, and Pacific The current occupancy rates for CCRCs and non-CCRCs by region are shown in the table below. Overall, CCRC occupancy was stronger than non-CCRC occupancy by 8.9 percentage points. Seniors housing and care communities in the Mid-Atlantic, Northeast, and Pacific regions, which were more significantly impacted earlier in the pandemic than other regions, currently have the strongest CCRC occupancy rates ranging from 89.2% to 88.0%. The weakest CCRC (and non-CCRC) occupancy is in the Southwest at 80.9% and 71.5%, respectively—a 9.4 percentage point difference. 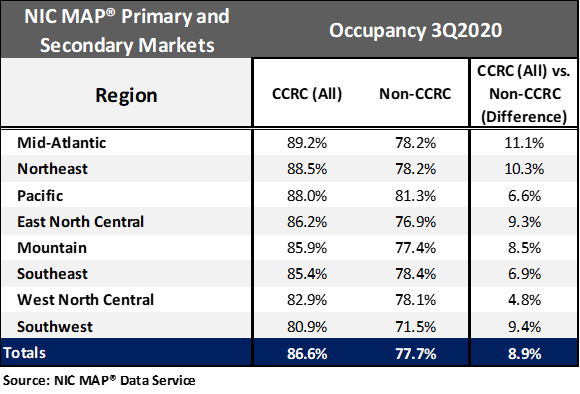 Look for future blog posts from NIC to delve deep into the performance of CCRCs. For further information on NIC, its reports, data, and analytics available to providers, please visit the NIC website at www.nic.org.

To learn more about NIC MAP® Data Service, and the latest metro-level data available to support your organization, schedule a meeting with a product expert today.