This blog features the NIC Analytics Demand Pulse Metric (DPM) for third quarter 2021 (3Q2021), a measure that examines senior housing demand (occupied units) for the NIC MAP® 31 Primary Markets and provides a window into the strength of a market based on occupied stock trends. The demand pulse metric pinpoints when 3Q2021 demand levels were last seen before the pandemic began to influence the senior housing sector in 1Q2020 and tracks demand growth and progress across the 31 Primary Markets.

The DPM Exhibit below provides a visual of these metrics for the Primary Markets as well as the individual metropolitan markets that comprise the aggregate measure.

Based on the positive momentum in net absorption patterns in 3Q2021, the level of occupied units in both Washington, D.C. and Kansas City had returned to 1Q2020 pre-pandemic levels. In fact, the level of occupied units in Washington exceeded pre-pandemic levels by 0.9%, while demand in Kansas City was near 1Q2020 levels and fell short by only 55 units, equivalent to a gap of merely 0.4% compared with 1Q2020 levels.

This analysis suggests that factors that influence demand are stronger in some markets than in others and that there will be some markets that will return to pre-pandemic demand levels sooner while others will take longer. Separately, and not surprisingly, a recent analysis by NIC Analytics looked at the share of same-store properties within individual metropolitan markets that had reached their pre-pandemic occupied unit levels and found that the demand recovery paths and timelines for properties also varied significantly. Hence as property performance goes, so goes broader metropolitan area performance.

In summary, positive senior housing demand momentum was evident in both the 2Q2021 and 3Q2021 NIC MAP® data after four consecutive quarters of pandemic-related weak demand. The upcoming 4Q2021 NIC MAP® Quarterly Data Release on January 6, 2022, will showcase if the demand recovery continued to expand or slowed down, and which other markets have fully returned to pre-pandemic 1Q2020 demand levels and which ones continued to lag. 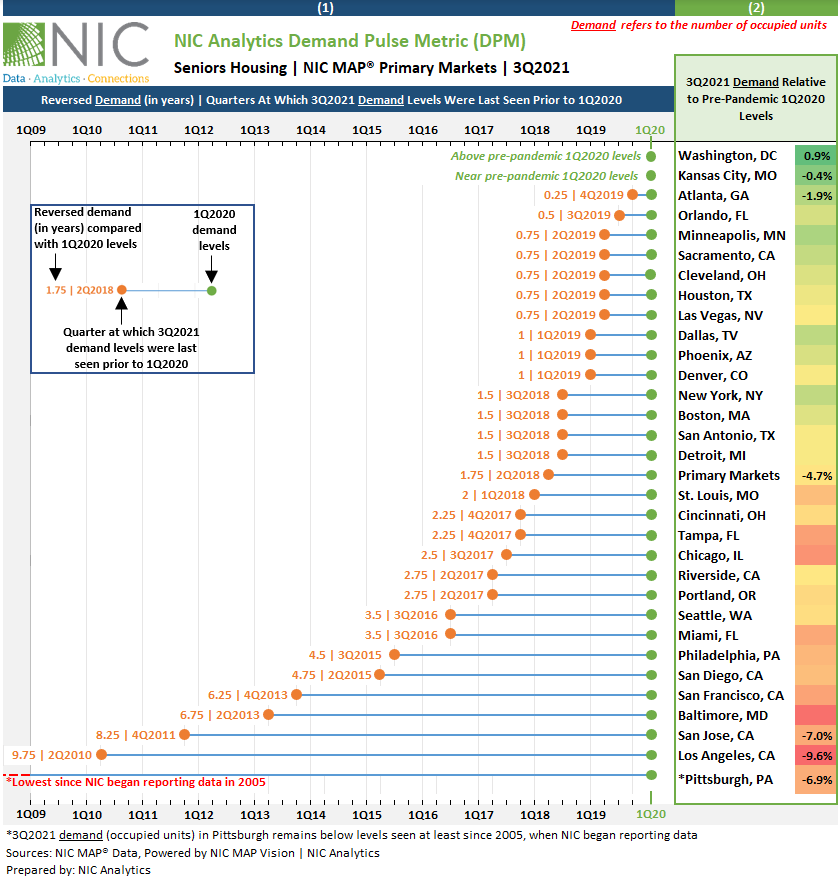 About Beth Mace and Omar Zahraoui

Omar Zahraoui, Senior Data Analyst at the National Investment Center for Seniors Housing & Care (NIC), is a seniors housing research professional with expertise in providing quantitative analysis and insights on seniors housing & care market data; building new products and reporting capabilities, including dashboards and proformas for clients and internal stakeholders; and implementing new processes and data solutions. Prior to his current role, Omar worked as a data analyst, at Calpine Corporation, supporting the development of new-business strategy initiatives, analyzing sales and financial data, and developing statistical modeling of consumers’ behaviors to drive business performance. Omar holds a Bachelor’s degree in Business Administration with concentrations in Finance and Management, a Master in Corporate Finance from IAE Lyon School of Management at Jean Moulin Lyon III University in France, and a Master of Science in Management Information Systems and Data Analytics from Pace University.