The impact of the Trump administration’s policies on economic growth is a matter of debate. So why not hold an actual debate?

Two prominent and influential figures will debate the impact of recent policies on economic growth at the 2017 NIC Fall Conference being held later this month, Sept. 26-28, at the Sheraton Grand Chicago. 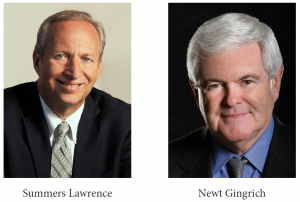 Former Treasury Secretary Lawrence H. Summers and former Speaker of the U.S House of Representatives Newt Gingrich will square off at the opening session, 8 a.m., Wednesday, Sept. 27.  The session will be moderated by Glenn H. Hutchins, chair of North Island, a family office, and co-founder of private equity giant, Silver Lake Partners.

Amid fast-moving events, hot button debate issues will include tax reform, regulation, immigration, healthcare, infrastructure funding, the future of Medicaid, and tariffs and trade, as well as the intended and unintended consequences of new policies under the current administration.

To preview the session, NIC recently spoke with Summers and Gingrich. While both represent very different political perspectives, they agree the senior living industry has an important role to play in the challenge represented by our nation’s aging population.

Here’s a quick sample of what attendees can expect to hear in more detail during the spirited exchange.

While not overwhelming, economic growth has been positive, said Gingrich. Less regulation and continued business and consumer confidence have been better than might have been anticipated. “The goal has to be 3%-plus growth for the next eight years,” said Gingrich. “If Republicans can deliver more take home pay, more jobs and more economic growth, they will win the election in 2018.”

Summers isn’t enthusiastic about Trump’s economic growth policies. “Much of what Trump has proposed is inconsistent with the basic laws of arithmetic,” he said. Summers worries about cutting off international trade. “We’ll make America poor again,” said Summers.

After watching the failed Republican effort on healthcare, sweeping tax reform may not be possible, said Gingrich. He instead advocates a simple tax cut to stimulate economic growth. Republicans need to have a signable bill on the president’s desk by Thanksgiving in order to stimulate economic growth going into the election in 2018. “It’s not irrational to imagine a recession next year in the absence of a substantial tax cut,” he said. “That could well produce Speaker of the U.S. House of Representatives Nancy Pelosi, which would be the most expensive outcome possible.”

Summers counters, commenting that Trump’s proposals for tax reform are not balanced, but favor a small minority of the population. “I welcome his concern with business confidence, but when that becomes an argument for climate change denial or dismantling basic financial protections, he steps way too far,” said Summers.

“It’s not dead,” said Gingrich. He notes two parallel efforts underway: one to make small improvements on a bipartisan basis, and another more sweeping reform that could earn the vote of Sen. John McCain who cast the deciding vote against the last Republican-led effort to dismantle Obamacare.

Summers disagrees.  “Obamacare, in broad outline, is here to stay,” he noted. “The truth is that it’s the most conservative way to provide universal healthcare.”

On potential changes to Medicaid, Gingrich believes waiver programs should be expanded so states can experiment. “We have proven we don’t have a national model that works,” he said.

Healthcare models that reduce costs and improve outcomes make a lot of sense, said Gingrich. A caveat: “Value-based models must not be bureaucratically managed.” He envisions specialized care and centers of excellence that provide state-of-the-art services for specific medical conditions. “Consumers must get more involved in their own healthcare,” said Gingrich.

The senior living industry needs to find ways to significantly reduce turnover rates among employees and improve training, said Gingrich. “One of the greatest needs is to have better learning systems that enable us to have a more stable supply of labor.”

Summers agrees that labor issues go back to education. “When we have labor shortages, it’s because people don’t have the requisite skills or incentives,” he said, adding that lower paid workers need to be given more responsibility and better working conditions in order to produce a higher degree of dedication.

For more information about the 2017 Fall Conference, visit www.nicevent.org