NIC released its Skilled Nursing Data Report on June 21, 2016. This is the second release of the report and includes key monthly data points from October 2011 through March 2016. In this week’s blog post, we’ll take a closer look at the release and provide a detailed analysis.

Occupancy increased in January and February of 2016 but leveled off in March to end at 83.4%. However, occupancy is down 108 basis points from October 2011, as the decline in length of stay continues to be a challenge. Over the past few years, there also has been more competition from home health and assisted living, which could be affecting occupancy, as well. The bounce back in occupancy from December 2015 to March 2016 is not surprising, consider the winter months often see a pickup of flu cases, slips/falls, and elective surgeries, all of which can cause an increase in occupancy rates. The quarter-over-quarter change in occupancy was 60 basis points, increasing from 82.8% in December 2015. As we dig deeper into the data, however, we see that the year-over-year change was a decrease of 90 basis points as occupancy dropped from 84.2% in March 2015 to 83.3% in March 2016.

As NIC mentioned in the 1Q2016 NIC MAP® Data Service subscriber webcast, the inaugural Skilled Nursing Data Report showed a noticeable seasonality pattern over the past few years within skilled mix and quality mix. Skilled Mix and quality mix increased to 26.0% and 35.5%, respectively, in the first quarter 2016, as seasonality continued to play a role this time of year. However, the effect of seasonality was not as strong this year as compared to the last two years, which may be attributed to the relatively late flu season.

While Medicaid rates increased over the past few years, the latest quarterly measure shows the rates flattening out, with the rate hovering around $198 in December 2015 and March 2016. Medicaid rates did increase slightly over the past year as rates increased 0.7% to $198 in March 2016 from $196 in December 2015. Medicaid rates and private-pay rates have proved to be somewhat of a bright spot when thinking about growth in rates. However, the question to be asked is if Medicaid reimbursement provides enough to care for that long-term patient? 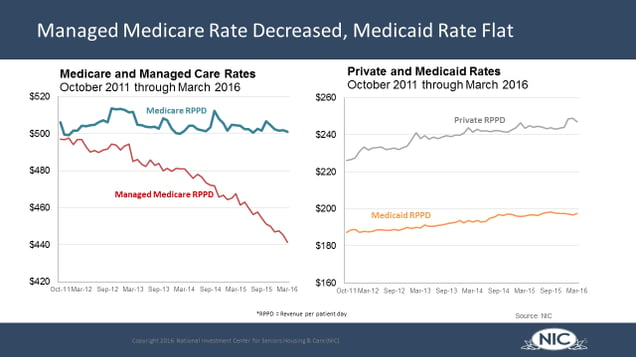 You can download the 1Q2016 Skilled Nursing Data Report at no cost online: