The Labor Department reported that nonfarm payrolls increased by 151,000 positions in August, a bit less than the 180,000 positions consensus projection and down from a very strong showing of 275,000 in July and 271,000 in June. Hiring has averaged 182,000 new positions per month over the past eight months. That is down from average gains of 229,000 in 2015. Revisions subtracted a total of 1,000 jobs to payrolls in the previous two months.

Job gains were led by the service sector and government. Employment in healthcare increased by 14,000 positions, a slower pace than seen over the past 12 months of 39,000. An estimated 9,000 positions were lost in nursing and residential care facilities.

The labor force participation rate, which is a measure of the share of working age people who are employed or looking for work, was also unchanged in August and stood at 62.8%. This figure is near a 40-year low and has garnered attention and worry by many policy analysts and pundits. Explanations for the low rate range from the baby boomers’ retirement to younger workers giving up on finding a job.

Average hourly earnings for all employees on private nonfarm payrolls increased by three cents to $25.73 in August. Over the year, average hourly earnings have risen by 2.4%, stronger than inflation. This measure of wage growth is starting to accelerate. Average hourly earnings increased 2.3% in 2015 and 2.1% in 2014. Increases in minimum wage rates in many states may start to put further pressure on this measure of earnings. Last month, Minnesota raised its minimum wage by 50 cents to $9.50 per hour for large employers. On July 1, other increases went into effect in Maryland, Oregon, and the District of Columbia.

The August job report is the last employment report the Federal Reserve will see prior to their next FOMC meeting on September 20 and 21. The report supports other indicators of general labor market strength, which could prompt the Fed to nudge the federal funds rate higher by 25 basis points. However, there is not general consensus within the FOMC about the timing of the next rate increase amid concerns about low inflation, weak GDP measures, soft corporate profits, weak business investment, slowing global growth, and the upcoming election. In December 2015, the Fed raised its benchmark interest rate 25 basis points, the first increase since the financial crisis. There has been much discussion of further increases since December, but there has not yet been one. 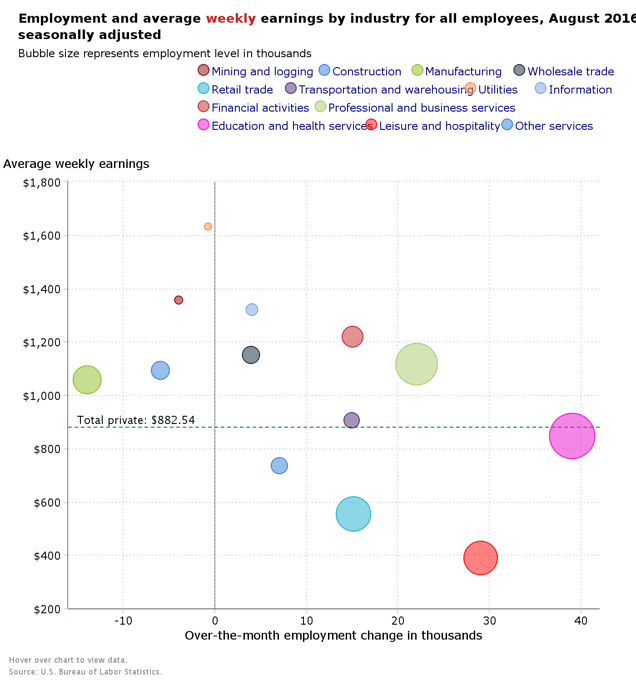