The first Friday of the month at 8:30 EDT is widely anticipated by market participants as the Labor Department presents a fresh gauge of the most recent economic performance in its release of the labor report for the prior month. Today’s number was even more closely watched since recent data releases on the economy (such as the second quarter GDP report that showed an expansion of only 1.2% at an annualized rate) suggest sluggish overall economic growth. The Federal Reserve will next meet on September 20 and 21 to assess the strength of the economy and decide if it should raise its benchmark interest rate. Last week, it decided to leave rates unchanged.

The Labor Department reported that nonfarm payrolls increased by 255,000 positions in July, more than the 180,000 positions consensus projection. June’s number was also revised up to 292,000 from an initially reported increase of 287,000. Revisions added a total of 18,000 jobs to payrolls in the previous two months. Hiring has averaged 186,000 new positions per month through the first seven months of the year, down from 229,000 in 2015 but still a strong pace.

Employment growth was broad based with gains occurring in government, construction, manufacturing, retail, financial services, leisure and hospitality, and temporary help agencies. The mining sector, which includes the oil and gas industry, saw further job losses. Since peaking in September 2014, the sector has shrunk by 220,000 jobs. Employment in health care increased by 43,000 positions. Over the past 12 months, healthcare has added 477,000 jobs.

The labor force participation rate, which is a measure of the share of working age people who are employed or looking for work, increased 10 basis points to 62.8%. Despite the increase, this is a relatively low rate and has garnered attention and worry by many policy analysts and pundits. Explanations for the low rate range from the Baby Boomer retirement to younger workers giving up on finding a job. 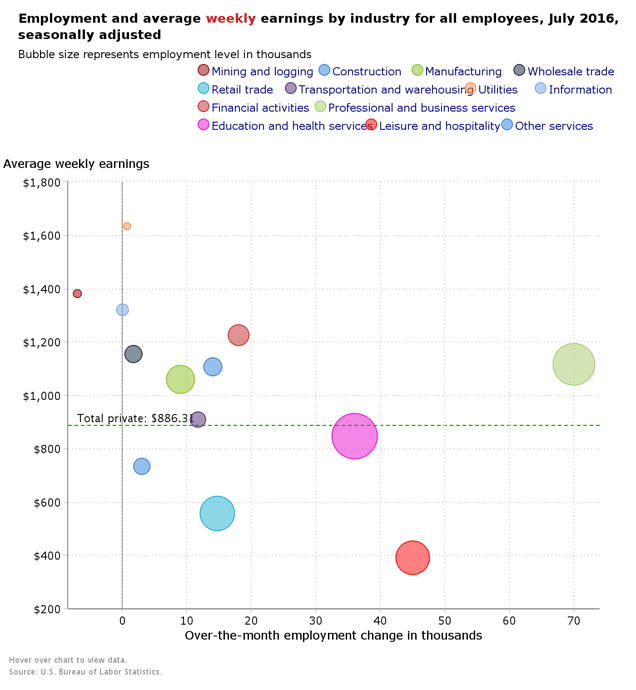 Average hourly earnings for all employees on private nonfarm payrolls increased by 8 cents to $25.69 in July. Over the year, average hourly earnings have risen by 2.6%. This measure of wage growth is starting to accelerate and is outpacing inflation (the consumer price index increased 1.1% in June from year-earlier levels). Average hourly earnings increased 2.3% in 2015 and 2.1% in 2014. Increases in minimum wage rates in many states may start to put further pressure on this measure of earnings. This past Monday, Minnesota raised its minimum wage by 50 cents to $9.50 per hour for large employers. On July 1, other increases went into effect in Maryland, Oregon, and the District of Columbia.