Based on the jobs data, the U.S. economy is looking strong, despite softness in other parts of the global economy

The Labor Department reported that non-farm employment increased by a healthy 242,000 positions in February.   The originally reported January gain of 151,000 was revised up to 172,000.  The median forecast in a Bloomberg survey had called for a gain of 195,000.  The three-month average from December to February was 228,000.  For the private sector, February’s job gains marked the 72nd consecutive month of positive gains.

Health care and social assistance employment increased by 57,400 in February.  For the twelve months ending in February, nearly 675,000 jobs have been generated in this sector, representing more than one of every five jobs created in the national economy.

The jobless rate remained at an eight-year low of 4.9% in February.  The unemployment rate has not been this low since February 2008, just before the Great Financial Crisis began. The wider measure of unemployment, the U-6 measure, fell to 9.7% in February from 9.9% in January.   This measure of unemployment includes those workers in part-time positions or too discouraged to look for work.  Moody’s Analytics estimates that this latter measure needs to fall to 9% for the economy to be considered at a “full employment” level. 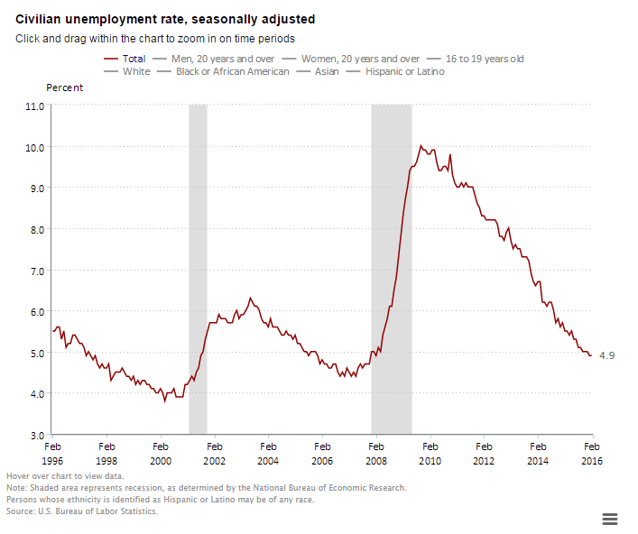 Average hourly earnings for private-sector workers were $25.35 in February, a three-cent decrease (0.1%) from January.  This was the first decline since December 2014.  On a year-over-year basis, wages were up 2.2% from year-earlier levels. This measure of wage growth continues to be stubbornly weak, despite the tightening in the labor force. 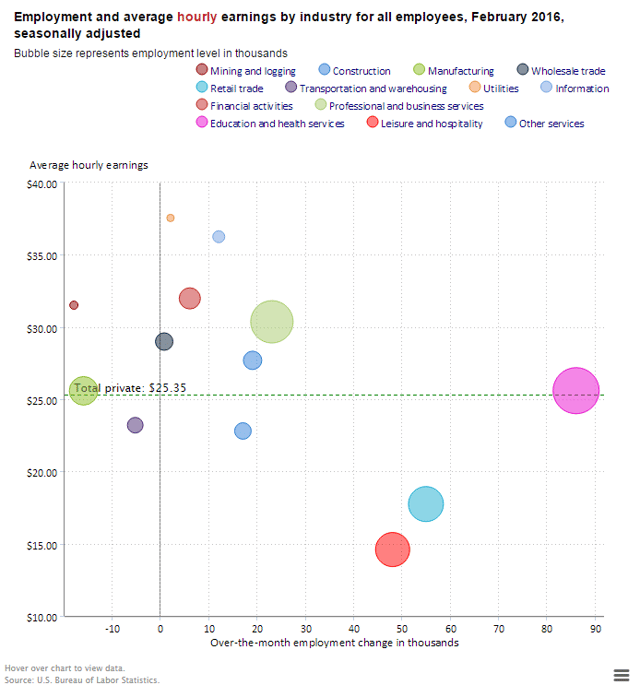 Based on the jobs data, the U.S. economy is looking strong, despite softness in other parts of the global economy.  The U.S. economy now has 5.1 million more jobs than it did at the onset of the recession in December 2007 and 13.8 million more jobs than at the recession low in early 2010.  Additionally, the jobless rate is less than half the peak of 10% reached in October 2009.

This report will give the Fed pause when it meets later this month at its FOMC March 15-16 meeting.  The Fed has indicated that it is closely tracking current economic conditions as it makes a decision on raising interest rates further this year from its target range of 0.25% to 0.5%.  The 242,000 gain in jobs suggests continued strength in the economy, but the weakness in wage growth suggests inflation is not approaching the central bank’s preferred 2% target range.