The following narrative shines a spotlight on CCRC/LPC occupancy trends in the combined primary and secondary markets, which represent the aggregate of the data collected from 99 of the largest core-based statistical areas (CBSAs).

All the data reviewed herein was downloaded directly from the “Trends” tool on the NIC MAP® client portal, selected by “Community Type,” which is a new categorization whereby each community is classified by its plurality care segment (IL, AL, MC, or CCRC/LPC). The CCRC/LPC selection by “Community Type” provides data that are mutually exclusive, allowing the analyst a quick and easy method for viewing CCRCs/LPCs separately and apart from other community types that NIC reports. 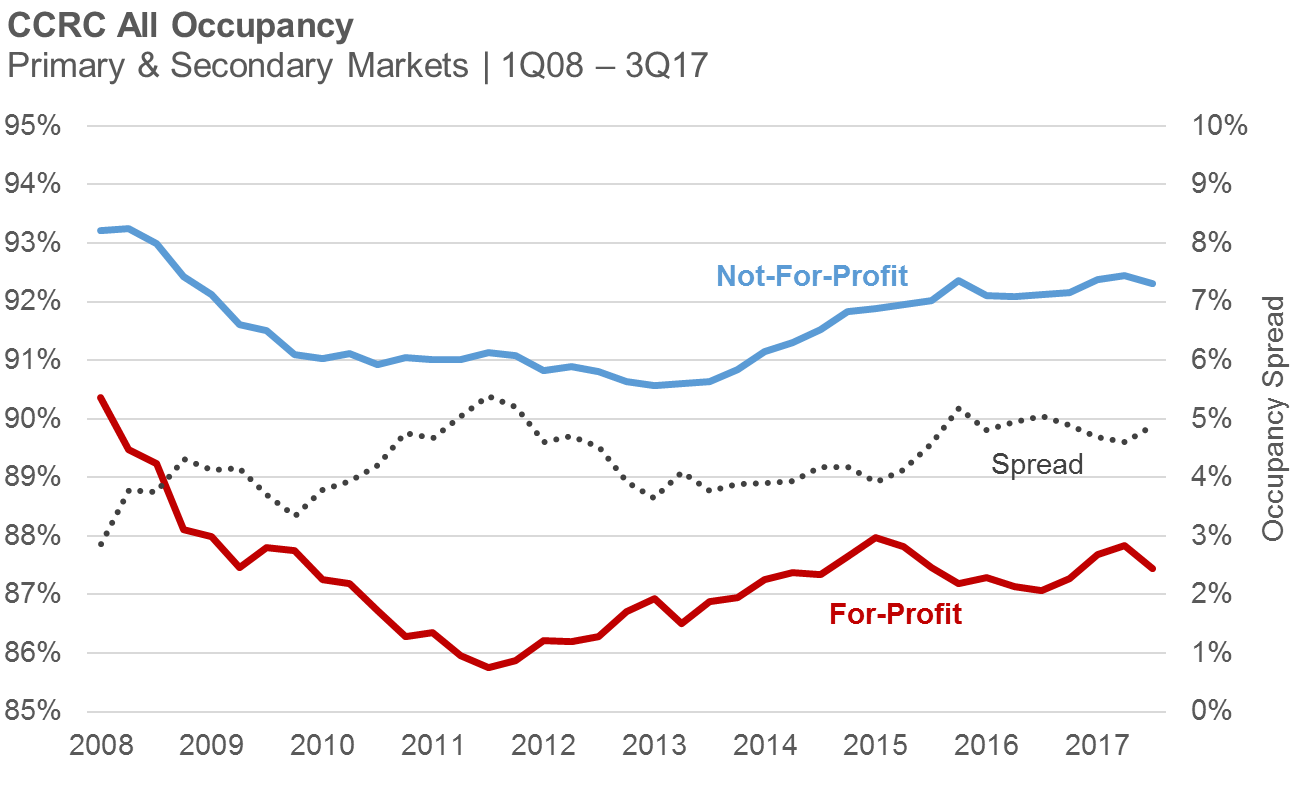 The spread between entrance fee and rental CCRC/LPC occupancy in the combined primary and secondary markets has been growing since the fourth quarter of 2013, with the widest differentials reached in the last two quarters of 2016 (3.0% and 2.9%) and the third quarter of 2017 (2.8%).

Seniors housing, like all commercial real estate has cycles—periods where there is significant development and others when there is little. Although entrance fee CCRCs/LPCs reported an uptick in annual inventory growth beginning in the third quarter of 2016, rental CCRCs/LPCs trended downward, reporting negative figures following two quarters of peak or near peak annual inventory growth. Negative growth is often a result of units being taken off line, and may reflect units being combined into larger residences or shifted to assisted living. 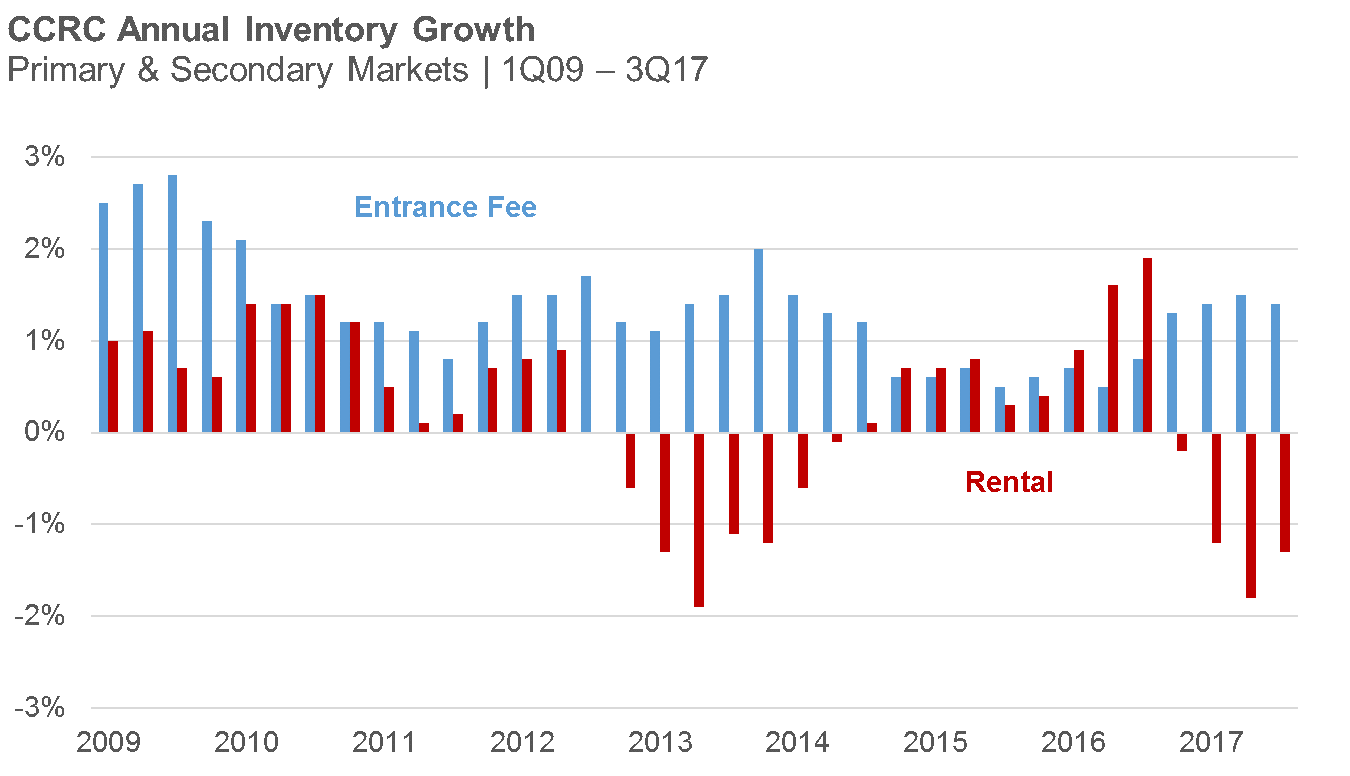 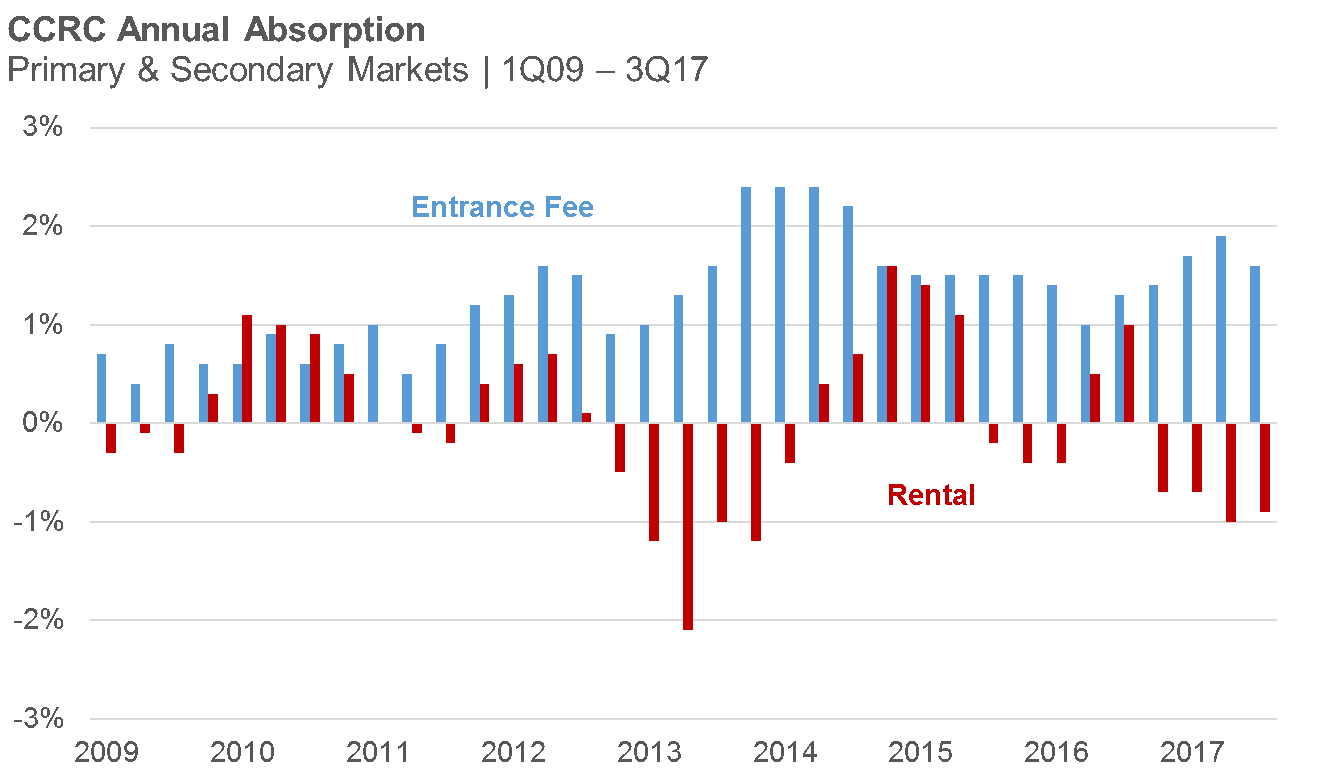 In summary, as of the third quarter of 2017, CCRC/LPC occupancy is trending upward since the cyclical low reached in the second quarter of 2013, but the data provide additional detail depending on how you slice it:

Indeed, the “Trends Tool” in NIC MAP® can be used to gain great insight into market trends specific to CCRCs/LPCs. Future blog posts leading up to the NIC MAP® 4Q2017 data release will delve into occupancy, supply and demand data for stand-alone memory care communities.