Exploring and Connecting at the 25th NIC National Conference

The 25th NIC National Conference wrapped up on October 2, bringing to a close three days of connecting with seniors housing and care leaders and exploring the prevalent issues affecting the industry today. This year’s theme, The Next 25, reflected on where we’ve been and where we’re headed.

This year’s conference introduced a new program feature: NIC Talks, a series of 12-minute presentations given by industry insiders and outside disruptors who answer the question, “What do you envision happening over the next 10 years (2016–2026) that will revolutionize the aging experience of the first boomer turning 80 in 2026?”  .

A pre-conference workshop, the NIC Seniors Housing and Care Boot Camp, gave newcomers (1-3 years) to the industry a mental workout as they learned the basics about seniors housing and care, and how to make the best decisions based on market conditions and available resources.

The boot camp session was put together by NIC’s Future Leadership Council (FLC). About 75 participants were given a mock scenario to discuss the best way to handle a portfolio of three properties: an older building, a new development, and vacant land. Participants were divided into small groups to discuss different options and outcomes using a simulation software.

A number of receptions and the first NIC Talks kicked off the first day of the conference.

Amid consequential changes in the seniors housing industry, two leading members of Congress addressed NIC’s opening session. Rep. John Delaney (D) and Rep. James Renacci (R) provided an insightful perspective from both sides of the aisle. Before being elected to Congress, Delaney was a commercial lender to seniors housing, and Renacci was a nursing home operator. The Congressmen agreed that the GSEs were an important capital source for the industry, though they advocated more risk sharing. They also discussed minimum wage laws and how change might impact operators while calling for immigration reform. The future of Medicare, Medicaid and Social Security will continue to pose concerns that will be difficult to resolve, they agreed. Renacci noted, “These programs were set up based on models that don’t exist anymore." 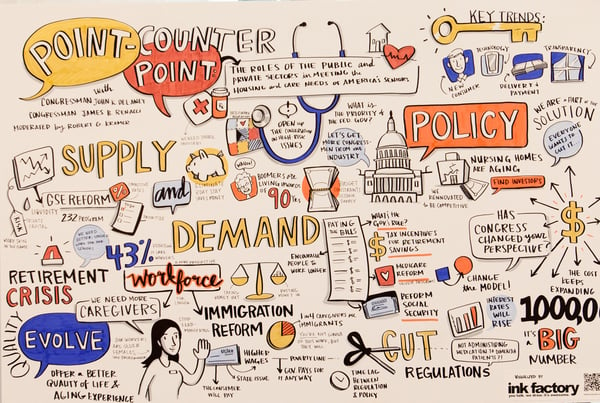 During the morning sessions, the “Beyond Substantial Compliance” panelists discussed the move from highly fragmented “mom and pop” post-acute and long-term care to a more industrialized and complicated sector, a move driven in large part by federal and state policies. Traditionally, quality has been based on what didn’t go wrong, but the market forces that are new to the industry will insist on a higher level of quality. Both operators and capital providers in the industry should prepare for this new era of outcomes determining quality.

Panelists in the “Development” session recommended taking a thoughtful and nuanced look at the individual market before making a commitment to a new project. Factors to consider include an analysis of market occupancies, demand, demographics, absorption rates and future population projections. “Do your homework,” advised panelist Kathryn Sweeney, co-founder and managing partner Panelists also discussed the growing evidence that new projects create demand instead of siphoning off residents from older projects.

Luncheon keynote speaker David Gergen, CNN’s senior political analyst, told attendees that the industry is at the heart of the explosion of the aging population. Drawing on the acronym VUCA—volatility, uncertainty, chaos, and ambiguity, Mr. Gergen said, “We’re in a period of enormous uncertainty.” The focus of Mr. Gergen’s talk was the 2016 presidential election and the Republicans and Democrats currently vying for their parties’ nomination. “The question is not who will win,” Mr. Gergen said, “but will the winner be able to govern.”

In the session titled, “Opportunity Knocking: The Impact of the Changing Payor Landscape,” Kurt Read, Principal at RSF Partners, moderated a discussion of the two interrelated changes affecting the payment models. The first change is the shift from fee-for service to outcomes-based systems. The second change is the decreasing average length of stay and how to survive it.

Another program feature new to this year’s conference, the NIC Technology Innovation Challenge took inspiration from TV’s Shark Tank as technology start-ups pitched new products and services in four minutes to a panel of judges. Unlike Shark Tank, the judges were not investors but well-known senior care providers that “represent the future of the industry.” The judges awarded a $1,000 prize to CareLinx, a platform that enables in-home care delivery for the elderly and chronically ill. Audience members also had the opportunity to question the presenters and vote for their favorite: SingFit, an app that digitizes music therapy for brain training. 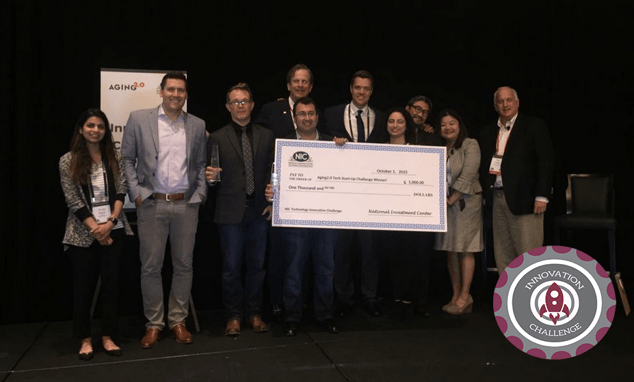 One of the final sessions of the day focused on NOI growth in seniors housing. Though building operators are accustomed to calculating net operating income (NOI), a more effective approach may be to understand the maximum potential of NOI. “If everything was aligned and every unit was optimally occupied, what would that look like?” asked Stephanie Handelson, president and COO, Benchmark Senior Living. She and other panelists discussed how to maximize NOI growth through pricing, rates, volume, turnover, discounts and inventory management. The panel also explored the importance of necessary expenses needed just to stay in the game, such as adding Wi-Fi to a building.

Day 3: Marching Toward the Future

On the final day of the NIC National Conference, discussions focused on next steps for the seniors housing and care industry.

In one of the morning’s concurrent sessions, presenters discussed how helping to redesign and develop what the new healthcare delivery system will be going forward will be crucial both from an investor and operator perspective. Moderator Scott Reid, co-founder and president of Alignment Covenant, led panelists in highlighting the myriad opportunities in this space and the strategies they’re implementing to take advantage of them.

As building values continue to rise and cap rates fall, the question being raised is whether or not the market has peaked. In another of the morning’s sessions, three experts discussed their take on current property sales prices at a session on valuations. The consensus was that the seniors housing and care market is somewhere near the peak. “We are sputtering at the top,” said speaker Alan Plush, senior partner, HealthTrust,LLC. Panelists expect more consolidation as smaller REITs buy portfolios with only a few properties. They also think more REITs may be buying other REITs as the cycle starts its eventual turn. A bright spot for the industry is that it has become a more accepted asset class and new sources of capital are available for investment.