The U.S. Government Accountability Office (GAO) concluded an investigation into data from the Centers for Medicare & Medicaid Services (CMS) on nursing homes, staffing practices, and financial performance by recommending that CMS make such data more easily accessible by the public and ensure the data’s validity. In the course of the investigation, the GAO revealed insights about margins and operations relative to the skilled nursing properties’ organization types. The agency’s report underscores the need for more and better financial skilled nursing data in the industry.

The Government Accountability Organization (GAO), which is the agency responsible for examining federal agencies' practices to ensure they comply with the law, holds other federal agencies accountable for their actions. The GAO's scope of investigations includes whether an agency is doing what it says it’s doing, is doing what it has the legal authority to do, and is doing everything it should be doing to comply with statutory requirements. Noting that Medicare spent $28.6 billion in nursing home reimbursements for over 1.7 million Medicare beneficiaries in 2014, the GAO conducted research into how nursing homes spend Medicare dollars and how those expenditures are reported to CMS. The investigation examined three specific issues relative to nursing home expenditures and reporting:

In its report, the agency gave two recommendations: CMS should do more to make expense data for skilled nursing properties available and accessible, and CMS should do more to verify the validity of self-reported expense data. CMS responded that it agrees with the first recommendation, but disagrees with the second, saying the process would require too many resources and return little benefit to the public. According to CMS, this data should be used for only general information, and therefore validating the data is not worth the labor investment. CMS also mentioned that some of these data points may be added to Nursing Home Compare.

The GAO used Medicare cost reports (which the agency notes are imperfect), interviews with experts and government officials, reported nurse work hours, and other resources to arrive at the recommendations included in the report. According to the GAO as well as a study from the International Journal of Health Services, skilled nursing operators have incentives and opportunity to obscure profits through management fees, leasing terms, and other cost categories. Because of the potential for profit underreporting, the GAO caveats its reported margin conclusions as potentially underestimated. 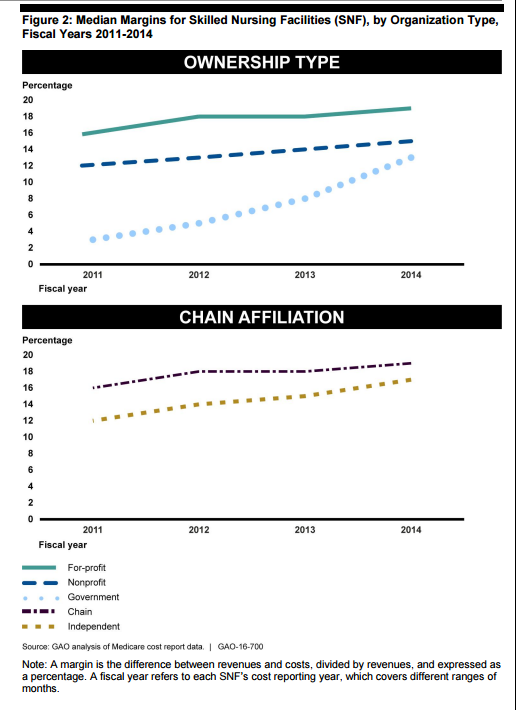 The investigation revealed that skilled nursing margins reported in Medicare cost reports were highest for for-profit providers at 19% and lowest for government-run facilities at 13% in 2014, though the GAO report does not define margins beyond “the difference between revenues and costs.” (See Figure 2, excerpted from the GAO report.) For-profit facilities had the fewest nurse and registered nurse staff hours per resident, while nonprofit providers reported margins and nurse staffing hours greater than government facilities, but lower margins than for-profit facilities. Margins increased in proportion to the number of nurse hours reported. The report also found that for-profit and chain facilities spend a lower percentage of their revenues on indirect and direct care, spending more on administrative and other costs. (See Table 3, excerpted from the GAO report, for definitions.) Margins were also higher for chain-affiliated providers, at 19% compared to 17% for independent facilities. 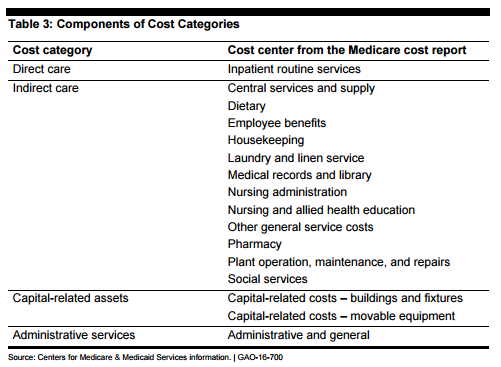 The investigation’s revelation that nonprofits report the highest staff hours but not the lowest margins is interesting and merits further examination. Further investigation may shed light on best practices both for quality of care and profitability. Most nonprofit providers are independent, though some large nonprofit chains exist, such as Evangelical Good Samaritan, which operates over 150 properties and is the 11th largest chain provider in the country, according to Provider Magazine. The next-largest nonprofit chain is Covenant Care, which operates 57 properties and is the 19th largest chain according to the rankings.

The difficulty of accessing CMS data and its lack of timeliness are among the main reasons NIC is collecting data to produce the NIC Skilled Nursing Data Report. Investors want a better understanding of key financial metrics, something they cannot get easily through CMS. Even if CMS follows through with the GAO’s recommendation to make the data more accessible, the data will still be older than what investors prefer. According to the GAO, the data could be potentially circumspect, as CMS argues it cannot vet the Medicare cost reports data for all 15,000 nursing homes in the US that participate in Medicare and Medicaid. Fortunately for those interested in the skilled nursing space, NIC publishes current financial data on this topic quarterly. If the federal government recognizes the value of this type of data, surely the operators and investors in the space do too.

You can download the complimentary NIC Skilled Nursing Data Report at any time online: