The Labor Department reported that non-farm employment increased by 151,000 positions for the first month of 2016.  The three-month average from November to January was 231,000.  For all of 2015, jobs increased by an upwardly revised 2.7 million positions, the second strongest year since 1999. Moody’s Analytics expects comparable job gains in 2016, with roughly 200,000 positions generated per month.

The jobless rate fell to an eight-year low of 4.9% in January from 5.0% in December.  The unemployment rate has not been this low since February 2008, just before the Great Financial Crisis began.  For perspective, the unemployment rate has not been lower than 4.4% since 2000.  The wider measure of unemployment, the U-6 measure, was 9.9%, unchanged from December.   Moody’s Analytics estimates that this latter measure needs to fall to 9% for the economy to be considered at a “full employment” level.

Average hourly earnings were up 2.5% from year-earlier levels, and December’s growth rate was revised up to 2.7% from 2.5%.  There is gradual evidence in the official wage numbers that wage growth is starting to accelerate, although less so than being anecdotally reported upon. 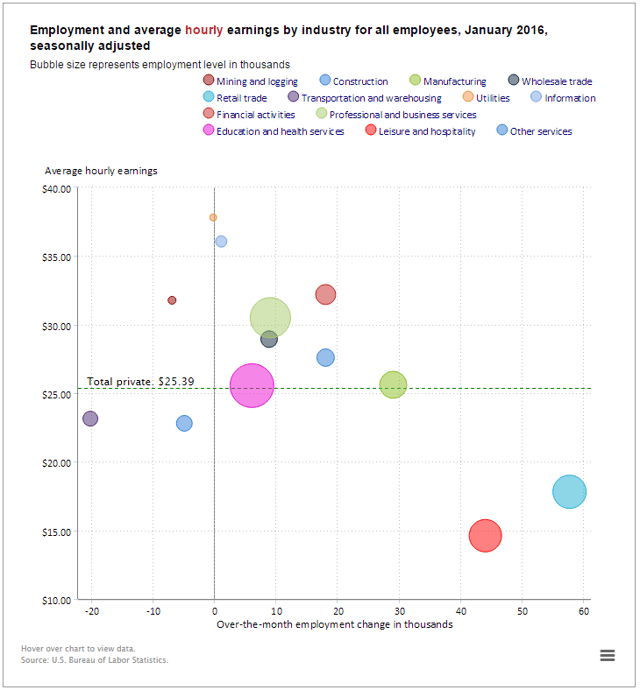 Based on the jobs data, the U.S. economy is looking strong.  The U.S. economy now has 4.9 million more jobs than it did at the onset of the recession in December 2007 and 13.6 more jobs than at the recession low in early 2010.  Additionally, the jobless rate is less than half the peak of 10% reached in October 2009.  However, other indicators of the economy have recently been coming in less strong.  This includes numbers on the nation’s manufacturing sector (the Federal Reserve reported that December’s industrial production index fell 0.4%, the third monthly decline in as many months, while durable goods orders retreated for the fourth time in the past five months), as well as the fourth quarter preliminary estimate on GDP of 0.7%.

The Federal Reserve needs to weigh and balance these mixed signals as it formulates its next steps for monetary policy and interest rates.   The relatively strong dollar, volatility in global stock markets, the drop in oil prices, weakening emerging market growth and policy decisions around the globe also need to be taken into account.  At this point, the futures markets are predicting that there is little chance that the Fed will raise interest rates at its March and only a 50% chance that it will raise rates this year, a sharp reversal from just six weeks ago when the Fed pushed the fed funds rate up by 25 basis points in its first interest rate since 2008.