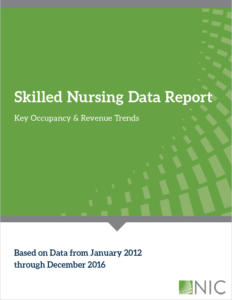 The current report is based on data collected monthly, but reported quarterly, from approximately 20 operators and 1,500 properties.  The data represents national, aggregate figures.  However, NIC plans to grow the data set, adding more operators and properties to produce state-level reports. NIC welcomes the participation of operators nationwide in this confidential data collection process. Participants will receive a free benchmark report every month for their contribution.

Here are the key takeaways from the report:

Stay tuned for a detailed article about the data in the next NIC Insider.

NIC released its latest Skilled Nursing Data Report on March 15, 2017.  You can download the latest report and future reports at:  http://info.nic.org/skilled_data_report_pr