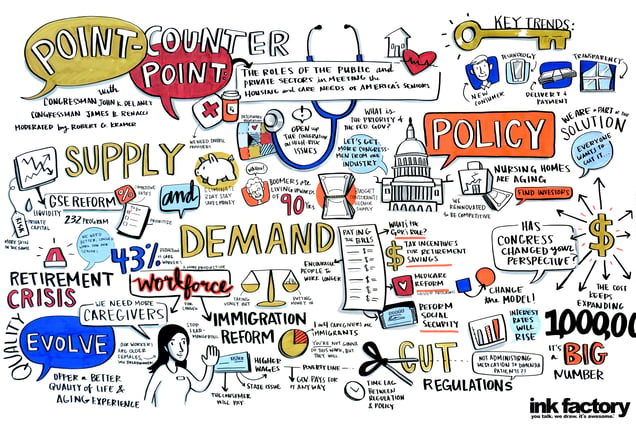 Providing an insider’s view of politics as crucial primary elections approach, two members of the U.S. House of Representatives with experience in the seniors housing and care industry, and political commentator and author David Gergen, addressed the 25th NIC National Conference.

At a time characterized by legislative gridlock, the congressmen showed that it is possible for both parties to work together on the critical issues that face the industry. Kramer asked about efforts to reform Fannie Mae and Freddie Mac, the government-sponsored entities (GSEs) that have provided a reliable source of debt to the industry. The GSEs will likely continue to provide capital to the sector, the congressmen said, recognizing that reforms are most likely to be put in place around the single-family home mortgage market. They also foresaw the need for new risk-sharing solutions in the form of mortgage insurance to attract more private capital to the market.

The congressmen agreed that the country faces a growing shortage of caregivers. “How will we take care of the aging population going forward when we don’t have growth in the younger population?” asked Renacci. “We have to look closely at this.”

Delaney advocated immigration reform, noting that 25% of workers in seniors housing and care are not native-born Americans. “This industry should be cheerleaders for immigration reform,” he said, adding that an influx of workers would reduce pressure on building operators. The congressmen disagreed on how to handle the minimum wage issue.

Delaney advocates a federal hike in the minimum wage, while Renacci believes each state should make that decision. He also worries that skilled nursing operators could be forced to pay higher wages without a corresponding boost in Medicare and Medicaid reimbursements. Long life expectancies and low individual savings rates raise the question of how the coming wave of seniors will pay for their care. “What should the government do?” asked Kramer.

“The government can’t solve every problem,” said Delaney, acknowledging that the country has a retirement crisis. He advocated that the government take three steps: encourage savings via tax breaks;

continue to work to slow the rising cost of healthcare; and fix Social Security to maintain its solvency.

Renacci added that programs such as Social Security were designed decades ago based on models of life expectancy that no longer apply. “We need to look at tax policy and long-term care insurance,” he said.

Federal budget pressures will force legislators to scrutinize the health care system for savings since it represents such a large part of the government’s outlay, the congressmen agreed. Rep. Renacci argued that a push to reduce costs and cut reimbursements should be coupled with fewer regulations. “We have to convince the government that some regulations are not needed,” he said.

At the Conference luncheon, political analyst Gergen began his keynote speech with the observation that societies judge themselves by how they treat their elders. “You are at the heart of that,” said Gergen, addressing about 2,000 NIC Conference attendees.

Gergen believes the country is in a period of enormous uncertainty that begs the question whether the upcoming elections will produce a winner who can actually govern. “These are very complicated times,” Gergen said, pointing to political stalemates at home and serious threats abroad.

Reviewing the primary election process, Gergen provided his take on the top presidential candidates.  On the Republican side, more than half of the support is for candidates who have never held public office, he noted. Hillary Clinton has the advantage among Democrats, but Gergen isn’t sure she can win the election. Meanwhile, Donald Trump may provide a lot of showmanship, but shouldn’t be discounted. “He is gradually morphing into a traditional candidate,” Gergen said.

Though the next President will face many challenges, Gergen sees hope in several emerging trends. The states and cities are creating their own solutions. And corporate innovation is changing the way we live. One example is the transformation of the energy sector. Another hopeful sign is the millennial generation, a group committed to public service much like those who fought in World War II. “Young people want to change America,” he said.