The preliminary 2016 third-quarter data is in, and it shows that transaction volume continues to slow down in 2016. Public buyers, mainly the public REITs, have led the slowdown, as cost of capital increased, and the number of transactions that suit their strategies declined. But on the private side, buyers continued to stay relatively active in the third quarter.

Private REITs and private owners/partnerships were the headliners in the third quarter, with volume over $1 billion for the 13th straight quarter. While overall volume fell quarter over quarter, the private buyer volume fell the least among all buyer types, with a 7% decline from $1.2 billion to $1.1 billion. Unlike public buyers’ large deals, the most recent transactions by private buyers are smaller but represent a relatively consistent flow.

What’s behind the resiliency of these private buyers? For starters, there is a large amount of private capital searching for yield given the continual low interest rate environment, so commercial real estate, which includes seniors housing and care, has had its fair share of buyers coming into the market. And compared to other commercial property types, seniors housing and, especially, skilled nursing properties have a larger cap-rate spread—higher expected investment returns—which presents a welcome opportunity for many private REITs, hedge funds, and other partnerships.

Also, there are many smaller transactions representing strategic buying and selling—from buyers looking to position themselves to gain market share or reposition a property, or sellers wanting to shed some non-core assets that might be a smaller portfolio or a one-off property sale.

The public buyer volume, usually dominated by the public REITs, continued to decrease in the third quarter, registering a 48% decline quarter to quarter, from $866 million to $448 million, and an even more significant 74% decline year over year. In comparison, the private buyer decreased by a much smaller 21% year over year.

The institutional buyer volume only decreased 12% quarter over quarter and actually registered more volume in the third quarter than the public buyer. 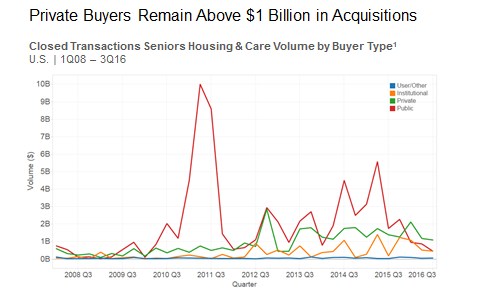 The number of transactions closed also decreased, as preliminary figures show that fewer than 100 deals closed. It’s important to keep in mind that we usually see some adjustments to these figures as smaller transactions are added into the database after the close of the quarter. However, the deal count currently shows a drop-off in deals from last quarter and also from the third quarter of 2015. There’s some talk of volume being slower because of the lack of large portfolio deals, but transaction counts are seemingly holding up. While we’re not seeing the 130–150 deals closing per quarter as we did the past two years, closing nearly 100 deals per quarter is still fairly robust activity.

Over the past couple of years, closings per quarter averaged 105 single property deals and 29 portfolio deals.

When we look at deal size, it’s clear that the larger transactions in the $1 billion+ range are missing. This include the large Welltower deal, which was announced but did not close in the third quarter. The last time a transaction closed with $1 billion or more in seniors housing and care properties was the Griffin/NHI Trilogy deal in the fourth quarter of 2015. Also in short supply over the past two quarters are deals in the $500 million to $1 billion range.

Stay tuned for October edition of the NIC Insider Newsletter, coming at the end of the month. If you're not subscribed to the Insider, subscribe now.