We frequently receive questions about the relationships between demographic trends and seniors housing demand at NIC and this commentary briefly addresses the topic. The chart below depicts the annual growth rates of three U.S. population age cohorts—(1)  persons aged 75 - 81, (2) persons aged 82 – 86 and (3) persons aged 87 plus for the period beginning in 2012 and ending in 2030.   The chart uses data from the U.S. Census Bureau’s 2012 Middle Series projections for the growth rates of these three cohorts.

We chose these cohorts intentionally, especially the 82-86 cohort.  While we don’t have an official and exact statistic on the average age of a person when they move into seniors housing, we believe, from anecdotal evidence that it is between 82-84 years of age.  We also know from the 2014 State of Seniors Housing Survey (SOSH), that the median length of stay of a resident in a seniors housing property is roughly 2 to 3 years (longer for IL than AL), implying that the typical age of a resident in seniors housing is likely between 82 and 86.  Hence, we created the 82-86 population age cohort, depicted in the chart below by the orange line. 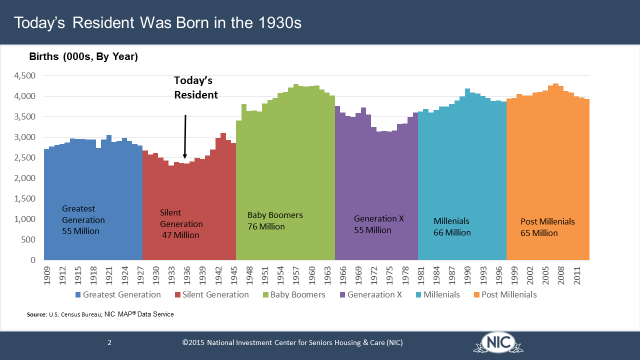 As the chart shows, the growth in the 82-86 cohort started to decelerate in 2013 and is projected to actually become nominally negative in 2015 and 2016.  This deceleration in growth largely reflects the effects of the Great Depression when fertility rates fell sharply causing births to hit a low point in 1933 (see live births chart above).  If you add 82 years to 1933, those born in 1933 are 82 today, the lower age of the cohort residing in seniors housing.

This suggests that there will be a demographic slowdown in this age cohort which could impact demand for seniors housing this year and next.  By 2017, the 82-86 cohort will start to accelerate again and will generally continue to do so until 2025, providing a nice demographic driver for seniors housing.  Between 2017 and 2025, this cohort will increase in size by 1.5 million persons, or 29% from 5.1 million to 6.6 million.  This cohort’s share of the U.S. population will grow from 1.6% to 1.9% over this period.

The green line shows the pattern of growth for the 87-plus cohort.   This population age group decelerates in growth through 2021 and then accelerates.  Again, this reflects the births of the 1930s, which accelerated after 1933.  In 2021, those persons aged 87 were born in 1935.  Note that while growth decelerates, it remains positive, allowing this cohort to grow in absolute numbers by 800,000 or 17% between 2015 and 2025.

For operators and capital providers of seniors housing, these demographic trends have many implications.  Among these are the following: