As I described in Part I of this two-part series on transactions volume in the second quarter of 2016, the decrease in transactions volume was due to a decrease in all buyer types: the public type (any publicly-traded company), the private type (not publicly traded, such as a private REIT, single owner, or partnership), and the institutional type (equity funds that manage pension money or other types of institutional money).

The private buyer volume also declined in volume activity, with a significant drop. The private buyer type consistently has stayed above $1 billion for 11 straight quarters and has provided a steady stream of activity, mostly coming from private REITs, until the second quarter. Private buyer volume dropped 68% from the first quarter of 2016 to only $678 million, down from $2.1 billion. When comparing to the same quarter last year, the volume dropped 61% from $1.7 billion.

In addition, institutional buyer volume decreased 79% from the prior quarter and decreased 84% from the second quarter of 2015.

The Cost of Capital a Factor for Public Buyers

What this exhibit shows is the premium in which the stocks are trading relative to the gross asset value. When the REITS trade at a premium to gross asset value (which is based on the private market cap rates and the portfolio holdings), the REITs can go out and buy properties by raising equity, and they will get an instant increase in value because the private market value is lower than their publicly-traded stock. In other words, their cost of capital is low when the premium is high. It is basically an arbitrage play when these stocks are trading at premiums.

As the exhibit shows, starting in 2013, the premium started to trend down, which in turn effectively raised their cost of capital, making it harder to pay up for properties.

This premium really started to decrease towards the end of 2015. I think that is certainly reflected in the closed transactions volume, as public REIT activity fell dramatically from the second quarter 2015 to the third quarter of 2015, especially on the seniors housing side. Looking at the exhibit, the skilled nursing premium decreased quickly, as we had the turmoil in the capital markets at the start of 2016.

This exhibit shows data through June 24, 2016—a day of turmoil in the markets because of “Brexit,” when the United Kingdom voted to leave the European Union. In addition to a bounce back in premium since the first-quarter turmoil, and interestingly enough, the public REITs were not affected on June 24 to the same degree as the rest of the stock market, which is a positive for their investors and potentially for their deal-making going forward. (And in fact, we already have started to see a little pickup in the third quarter.) But we will have to see how the next few months play out as there is usually a lag  between changes in the cost of capital and actual deal closings for the time period. 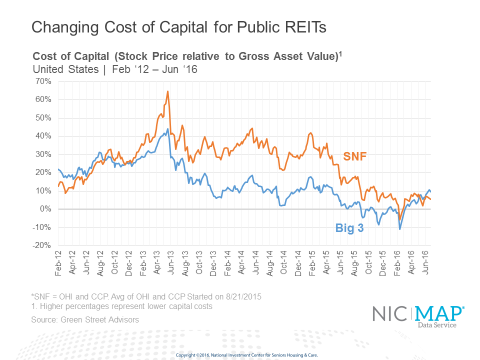 Data at the Conference

Hear the recent market trends in seniors housing and care at the 2016 NIC Fall Conference.