In the last major release of employment conditions under the Obama Administration, the Labor Department reported on Friday that nonfarm payrolls increased by 156,000 positions in December. Marking the seventh year of economic expansion, 2.2 million jobs were generated in 2016, compared with 2.7 million in 2015. Hiring has averaged 180,000 new positions per month over the past 12 months. The December gain was below the 175,000 consensus projection. The change in total nonfarm payroll employment for November was revised up from 178,000 to 204,000 and the change for October was revised down from 142,000 to 135,000. With these revisions, employment gains in November and October combined were 19,000 higher than previously reported. 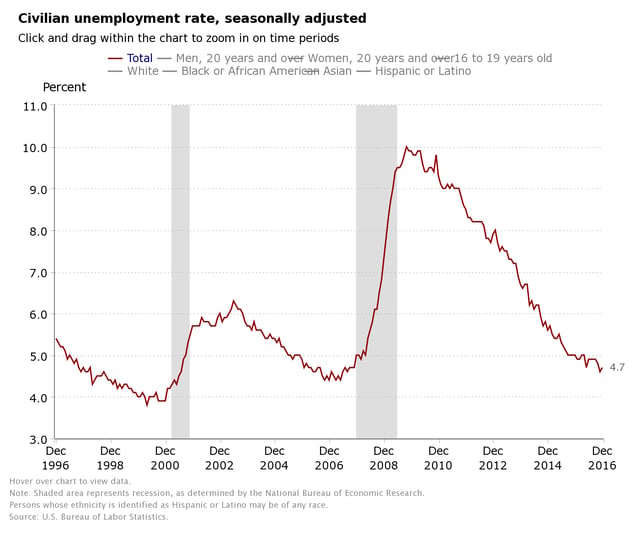 The labor force participation rate, which is a measure of the share of working age people who are employed or looking for work, was little changed and remained at 62.7% in December. It is very low by historic standards and in part reflects the effects of retiring baby boomers.

The December jobs report paints a picture of a reasonably strong labor market and lends support to the decision by the Federal Reserve to increase interest rates at the last meeting. With wage growth starting to accelerate, the Fed will likely continue on its path of gradually increasing interest rates as the year unfolds.

Get the Latest Trends & Data at the Spring Forum

What is the economic outlook for 2017? How will changes in fiscal and monetary policy affect access to capital? What economic trends will influence your investment strategies or business plans this year?

Join the 2017 NIC Spring Investment Forum, March 22–24 in San Diego, to hear the latest macroeconomic trends and NIC data on the seniors housing and skilled nursing sectors, including occupancy rates, supply and demand conditions, and a comparison of metropolitan market performance across the U.S.