Buyer Activity Strong in 3Q as Pricing Picks Up

The U.S. seniors housing and care transactions market saw a slight drop in dollar volume in the third quarter of 2019 from the previous quarter. However, measured by the number of transactions closed year-to-date in 2019, the market seems to be very active on a relative basis. Judging by interest from investors, especially from the private buyers (discussed further below), this trend is likely to continue in the short-term barring any liquidity or economic shocks.

When comparing the number of transactions closed, the first three quarters of 2018 lagged that of the same period in 2019, with 391 and 441 transactions closed, respectively. That represents a 13% increase year-over-year. Given that transaction volume is relatively strong, in terms of the number of deals closed, the activity is another testament of the continued plentiful liquidity in the seniors housing and care market. Nearing the close of 2019, we should expect strong activity in the fourth quarter, barring any capital market disruptions, as there is typically a push to close deals that have been in the pipeline before year-end.

Public buyers represented $2.5 billion of the $10.3 billion of total dollar volume thus far in 2019, or 25% of total volume. Institutional buyers only represented $1.9 billion of the total dollar volume through the third quarter of 2019. The institutional buyers which include many of the private equity companies that manage institutional funds such as pension and endowment money, have raised lots of capital but anecdotal evidence suggests they are having a hard time putting the capital to work in a meaningful way due to competition and high property prices, in addition to lower expected returns. 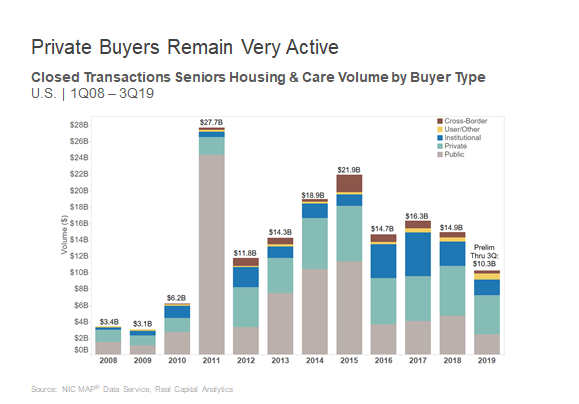 As a closing note, when analyzing this pricing data, it should be  pointed out that some higher priced, or lower priced, outliers can skew the averages. In the third quarter, for example, Riverview SNF Realty LLC bought from Eastern Blvd Real Estate LLC at a price per bed of $140,000, which  represents a much higher price per bed than the rolling four-quarter average. The same holds true for seniors housing. In a third quarter 2019 deal, GFH Financial Group bought from Harbert Management Corp. at a price per unit of more than $300,000, again representing a much higher figure than the average.