Of the 99 NIC MAP® primary and secondary metropolitan markets that the NIC MAP® Data Service reports on across the nation, 11 are in California.1 Within these metropolitan markets, NIC tracks 937 seniors housing properties with 107,500 units, or nearly 12% of the seniors housing properties within the 99 markets. By coincidence, this share is comparable to California’s 12% share of the total U.S. population (39.6 million people live in California versus 327 million in the U.S. as of 2018). Within the state, performance measurements vary considerably. 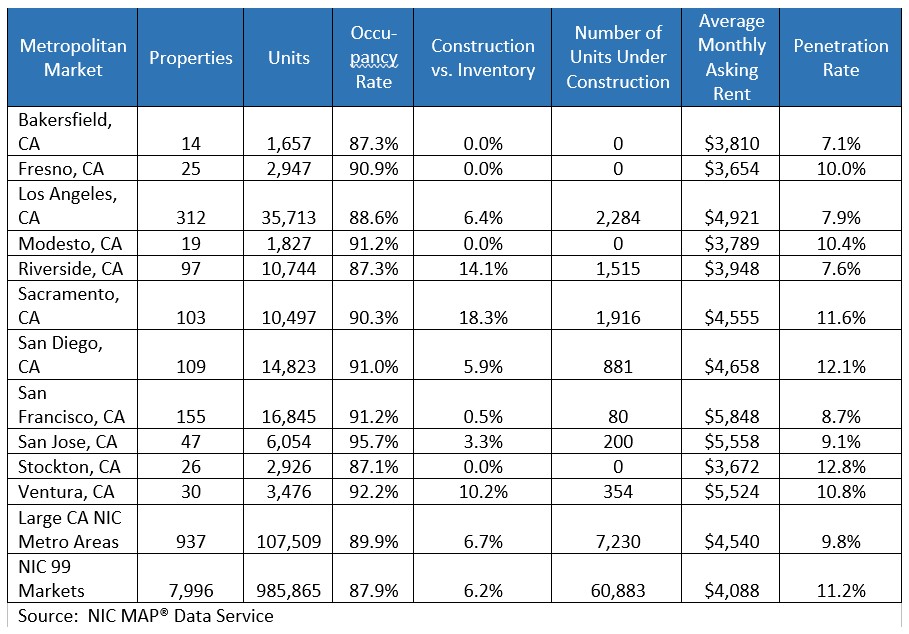 No Two Metropolitan Markets are the Same.  Of the 11 California metropolitan markets in the NIC MAP 99 markets, 6 ranked in the top 22 best performing markets for occupancy as of the fourth quarter of 2019. These include top ranking San Jose, with an occupancy rate of 95.7%, the highest in the nation, Ventura at 92.2% (seventh of 99 markets), Modesto at 91.2% and San Francisco, San Diego and Fresno, all with occupancy rates above 90%. Three of the 11 had occupancy rates below the national average of 87.9% in the fourth quarter: Bakersfield and Riverside both at 87.3% and Stockton at 87.1%. Los Angeles and Stockton were in the middle of the pack.

Construction Ebbs and Flows.  Three of California’s 11 markets have relatively much construction underway—Riverside, Sacramento, and Ventura. Construction as a share of inventory stood at 14.1%, 18.3% and 10.2%, respectively, in the fourth quarter, above the 99 Primary and Secondary markets pace of 6.2%. On the other hand, six of these California markets have virtually no construction underway—parts of the Central Valley (Bakersfield, Fresno, Modesto and Stockton) and the Bay Area (San Francisco and San Jose). Los Angeles and San Diego have 6.4% and 5.9% shares of inventory under construction as of the fourth quarter 2019, respectively.

Difficult zoning regulations and entitlement rules, and the subsequent barriers to entry imposed on new development, often mean that California’s construction activity remains relatively low for many of its metropolitan markets. While this is bad news for those trying to get into the market, it is decidedly good news for incumbents in those markets as well as those developers and operators that currently have projects underway.

Asking Rents.  Coastal California’s higher cost of living and of doing business, as well as higher home prices, means asking rents for seniors housing in these markets (Los Angeles, San Diego, San Francisco, San Jose, and Ventura) were 30% higher, on average, than the 99 Primary and Secondary markets average asking rent, with San Francisco a full 43% higher and San Jose 36% higher as of Q4 2019. However, except for Sacramento which was 11% higher, the more centrally located Central Valley metropolitan markets in California (Bakersfield, Fresno, Modesto, Riverside and Stockton) had asking rents that were 8% less than the national average.

What’s Ahead?  Looking ahead, it’s likely that San Jose will retain its title as among the highest occupied markets for some time. Construction as a share of inventory remains low at 3.3% (200 units). While more projects may be in the pipeline at this time, they have not yet broken ground. Given that the time from groundbreaking to opening has lengthened and assuming California’s construction cycle is similar to that of the nation, it will likely be two years or later for new competition to significantly affect incumbent operators. In addition, San Jose is a high-barrier-to-entry market which will limit the threat of new competition.

In contrast, construction as a share of inventory totaled 18.3% (1,916 units) in Sacramento in the fourth quarter, the highest share in the nation. The completion and opening of these units will put downward pressure on Sacramento’s occupancy rate which has already been pushed lower by the completion of more than 1,000 units since 2016. Since then, the occupancy rate has fallen more than three percentage points from an all-time high of 94.0% in the third quarter of 2016 to 90.3% in the fourth quarter of 2019. For perspective, it has taken the market since mid-2012 to absorb on a net basis the equivalent 1,930 units.

In summary, California is a big state. If it were a stand-alone nation, it would rank fifth in the world, with a “GDP” of more than $2.7 trillion. It is a state of multiple dynamics in terms of development and growth opportunities, population and demographic subtleties and lastly, consumer preferences. This is perhaps nowhere as evident as in the performance of its myriad seniors housing properties.

1 Note that NIC MAP also tracks seven additional smaller California markets that are not included here. The data time series for these additional markets is not as long.