The Labor Department reported that nonfarm payrolls rose by a weaker than expected 235,000 in August 2021. The consensus had been for an increase of 725,000. This was a sharp deceleration from July when jobs grew by 1.1 million and June when jobs increased by 962,000. Through August, monthly job growth has averaged 586,00 per month. Nonfarm payrolls are now up by 17.0 million since April 2020 but remain down by 5.3 million or 3.5% from pre-pandemic levels of February 2020.

The data show that the U.S. recovery from the pandemic continues but at a slower pace. The COVID-10 Delta variant may be weighing on the economy as evidenced by the limited growth in the high-contact leisure and hospitality sectors which had been expanding rapidly prior to August. Businesses may be holding off hiring and workers may be holding off taking jobs amid heightened fear of the Delta variant. 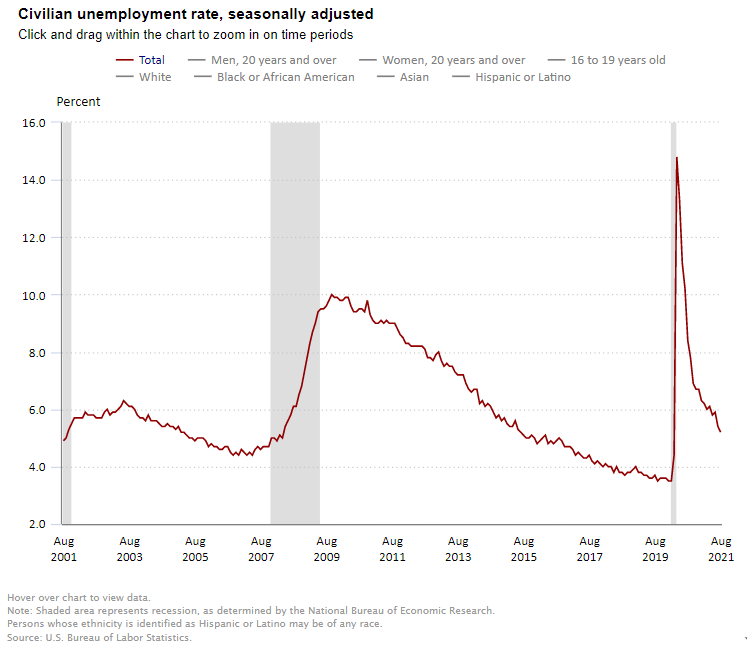 Today’s report is important as the Federal Reserve wants to see “substantial progress” in the economy before it shifts monetary policy and begins “tapering” when it will purchase fewer long-term securities for its balance sheet and before it starts to shift toward a higher interest rate regime. That said, Fed concerns about upward pressures on wages may have been exacerbated by the 4.3% annual increase in average hourly earnings.

Indeed, average hourly earnings for all employees on private nonfarm payrolls rose by $0.17 in August to $30.73, a gain of 4.3% from a year earlier and up from a revised 4.1% in July. August marked the fourth consecutive month of increases. The data suggests that rising demand for labor associated with the recovery from the pandemic is putting upward pressure on wages. That said, the Labor Department warns that the pandemic has affected the ability to fully interpret the wage data due to the wide swings in employment trends.

Separately and from a different survey, the Labor Department reported that the unemployment rate fell by 0.2 percentage points to 5.2% in August and the number of unemployed persons fell to 8.4 million, still higher than the 5.7 million persons prior to the pandemic. The jobless rate is now 1.6 percentage points above the pre-pandemic level of 3.5% seen in February 2020, but well below the 14.7% peak seen in April 2020. The underemployment rate or the U-6 jobless rate was 8.8% down from 9.2% in July 2021. This figure includes those who have quit looking for a job because they are discouraged about their prospects and people working part-time but desiring a full work week.

The labor force participation rate, which is a measure of the share of working age people who are employed or looking for work was steady at 61.7% in August and has remained within a narrow range of 61.4% to 61.7% since June 2020. Many workers have dropped out of the labor force since the pandemic began to take care of family members or out of fear of working and catching the virus.

The change in total nonfarm payroll employment for June was revised up by 24,000 from a gain of 938,000 to 962,000 and the change for July was revised up by 110,000 from 943,000 to 1,053,000. With these revisions, employment in July and June combined is 134,000 higher than previously reported. Monthly revisions result from additional reports received from businesses and government agencies since the last published estimates and from the recalculation of seasonal factors.