The Labor Department reported that nonfarm payrolls rose by a disappointing 195,000 in September 2021. The consensus had been for an increase of 500,000. This was a deceleration from August when jobs grew by an upwardly revised 366,000 (originally reported as 235,000) and from July when jobs increased by 1,091,000, up from 1,053,000 as originally reported. The three-month moving average of nonfarm payrolls was 550,000 as of September, versus 806,000 in August and 889,000 in July, still strong but signaling some slowing in momentum. Nonfarm payrolls remain down by 5.0 million from pre-pandemic levels of February 2020.

Interestingly, the labor force contracted by 183,000 and was 3 million less than at its pre-pandemic level. Many had speculated that the labor force would increase since enhanced unemployment benefits had largely expired and schools largely reopened. 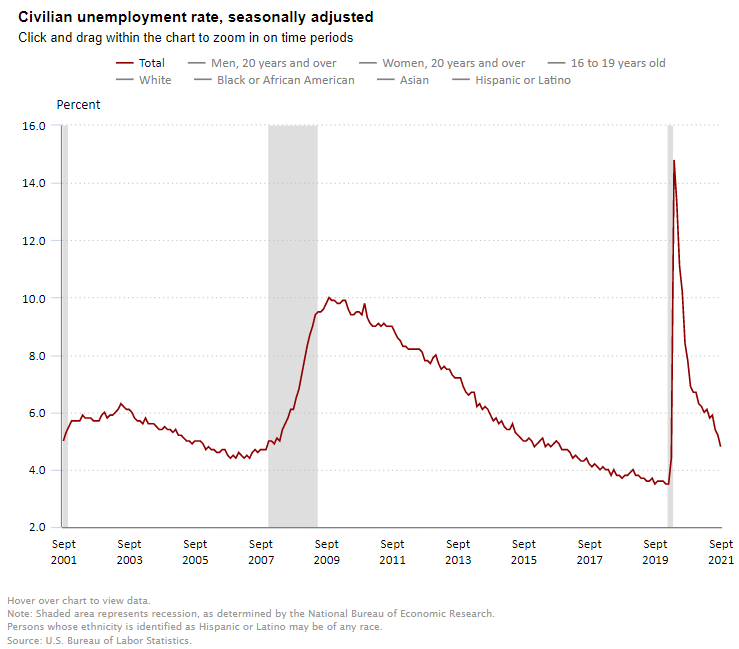 The data show that the U.S. recovery from the pandemic continues, but at a slower pace. The COVID-10 Delta variant may be weighing on the economy as evidenced by the limited growth in the high-contact leisure and hospitality sectors (up only by 74,000) which had been expanding rapidly prior to August. Businesses may be holding off hiring and workers may be holding off taking jobs amid heightened fear of the Delta variant.

Today’s report is important as the Federal Reserve wants to see “substantial progress” in the economy before it shifts monetary policy and begins “tapering” when it will purchase fewer long-term securities for its balance sheet and before it starts to shift toward a higher interest rate regime. While disappointing from what the markets had anticipated, the report is likely strong enough that the Fed will begin tapering its asset purchases next month. That said, the growing evidence of upward pressure on wages suggests that the Fed will remain concerned about inflationary pressures.

Indeed, average hourly earnings for all employees on private nonfarm payrolls rose by $0.19 in September to $30.85, a gain of 4.6% from a year earlier and up from a revised 4.3% in August. September marked the fifth consecutive month of increases. The data suggests that rising demand for labor associated with the recovery from the pandemic is putting upward pressure on wages. The large annual increase also occurred despite the return of lower-wage leisure and hospitality workers which theoretically should be depressing the overall increase. That said, the Labor Department warns that the pandemic has affected the ability to fully interpret the wage data due to the wide swings in employment trends. 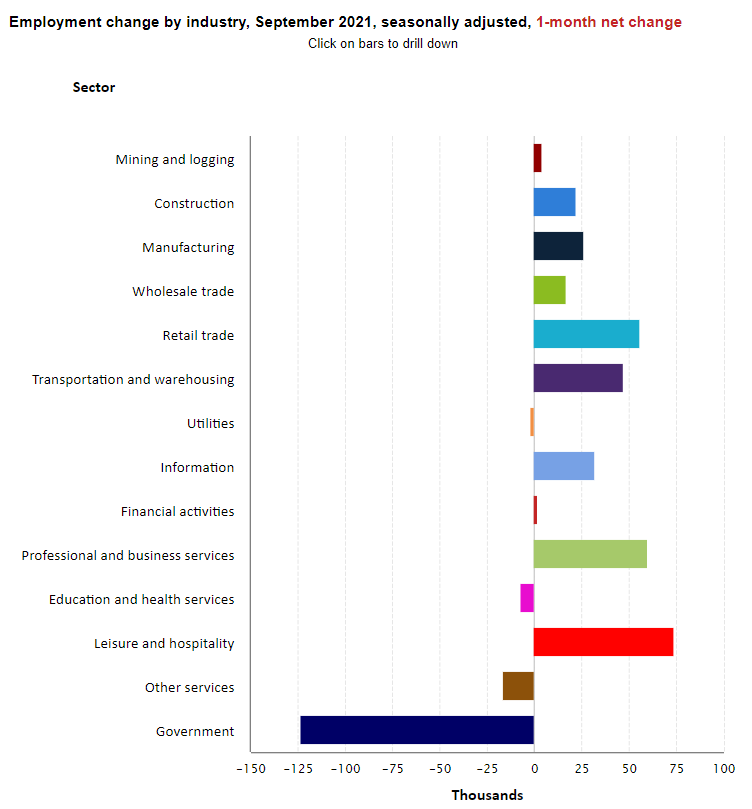 Separately and from a different survey, the Labor Department reported that the unemployment rate fell by 0.4 percentage point to 4.8% in September and the number of unemployed persons fell to 7.7million, still higher than the 5.7 million persons prior to the pandemic. The jobless rate is now 1.3 percentage points above the pre-pandemic level of 3.5% seen in February 2020, but well below the 14.7% peak seen in April 2020. The underemployment rate or the U-6 jobless rate was 8.5% down from 8.8% in August 2021. This figure includes those who have quit looking for a job because they are discouraged about their prospects and people working part-time but desiring a full work week.