Disappointing Gain in November Employment Report: Jobs Up by 210,000

Through November, the year-to-date monthly average job gain has been 555,000. Nonfarm payrolls have now increased by 18.5 million since their pandemic trough in April 2020 but are still down by 3.9 million or 2.6% from their pre-pandemic level in February 2020.The potential negative impact of the newly identified Omicron variant on jobs is not reflected in the November data. It's far too early to tell. The data show that the labor market continues to be affected by the Delta variant especially in the hospitality sector. Indeed, leisure and hospitality payrolls edged up by a muted 23,000, following large gains earlier in the year. Employment in the leisure and hospitality industry increase by 164,000 in October and has risen by 2.54 million thus far in 2021, but it is still down by 1.3 million or 7.9% from February 2020. 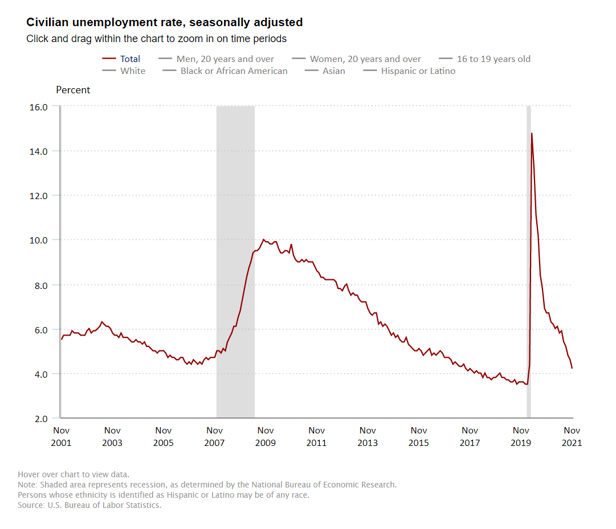 Separately and from a different survey, the Labor Department reported that the supply of labor as measured by the labor force rose by a solid 594,000 in November. With the household measure of employment rising by more than 1.1 million, the jobless rate fell 0.4 percentage point to 4.2% in November. The labor force is 2.4 million below the February 2020 level. The jobless rate is now 0.7 percentage points above the pre-pandemic level of 3.5% seen in February 2020, and well below the 14.7% peak seen in April 2020.

The underemployment rate or the U-6 jobless rate was 7.8% down from 8.3% in October 2021. This figure includes those who have quit looking for a job because they are discouraged about their prospects and people working part-time but desiring a full work week. 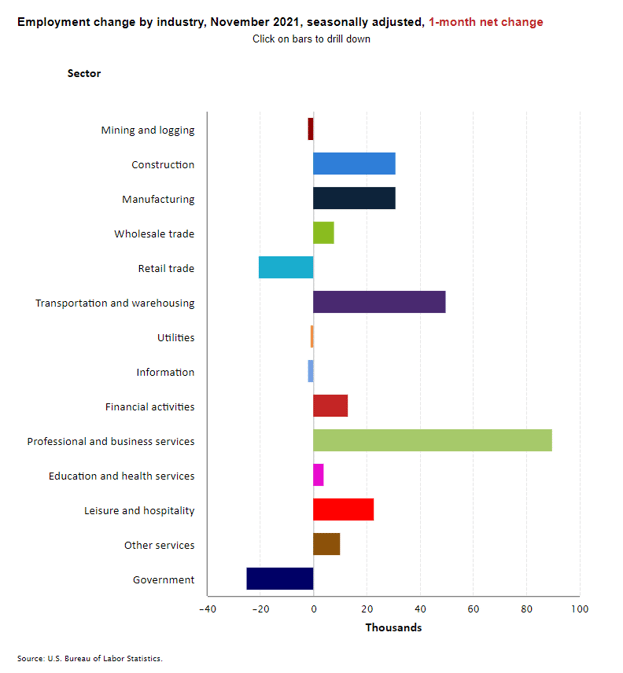 Further, weekly claims for unemployment benefits fell last month below their pre-pandemic numbers for the first time since the recovery started. The four-week moving average of benefit claims dropped to 238,750 — the lowest level since the middle of March 2020, when the pandemic's effect on the labor market began to gain speed.

Nevertheless, businesses continue to struggle to find staff. The BLS JOLTS data for September showed that there were 10.4 million job openings and the highest quit rate on record.

Concerns about rising wage costs will remain after this report. Indeed, average hourly earnings for all employees on private nonfarm payrolls rose by $0.08 in October to $31.03, a gain of 4.8% from a year earlier.