Employment Increased by 428k in April, Jobless Rate Unchanged at 3.6%

The Labor Department reported that nonfarm payrolls rose by 428,000 in April 2022 and the unemployment rate held steady at 3.6%. The report confirms that the labor market remains resilient, despite the war in Ukraine and on-going supply-chain pressures. Concerns about rising wage costs and inflation are also backed by this report. Average hourly earnings for all employees on private nonfarm payrolls rose by $0.13 in April to $31.85. This was a gain of 5.5% from year-earlier levels, just slightly less than the 5.6% gain seen in March.

The data shows that the labor market continues to gain momentum and wage growth is accelerating. The report strengthens the Federal Reserve’s intention of raising interest rates further following the 0.50 percentage point hike in the fed funds rate announced earlier this week. 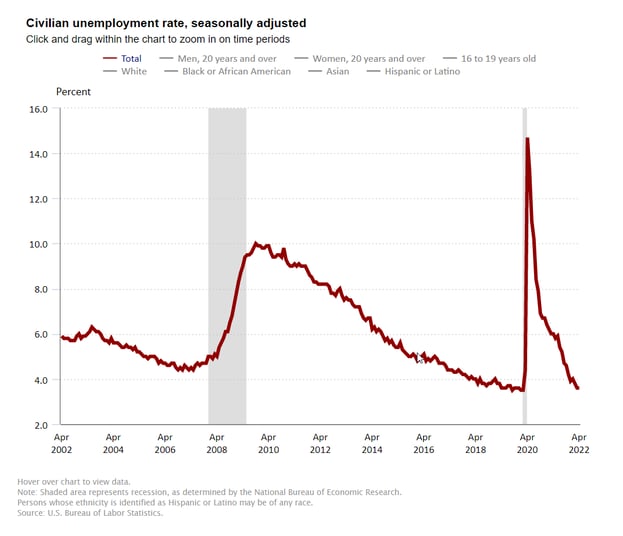 In a separate survey conducted by the BLS, the jobless rate was unchanged at 3.6% in April 2022. The jobless rate is only 0.1 percentage point above the pre-pandemic level of 3.5% seen in February 2020, and well below the 14.7% peak seen in April 2020. The number of persons unemployed was essentially unchanged at 5.9 million but was still above the 5.7-million-person level seen prior to the pandemic.

The report also showed that workers are returning to their place of work. Roughly 7.7% of employed persons teleworked because of the pandemic, down from 10.0% in the prior month, 23% in February 2021 and more than one third at the height of the pandemic. 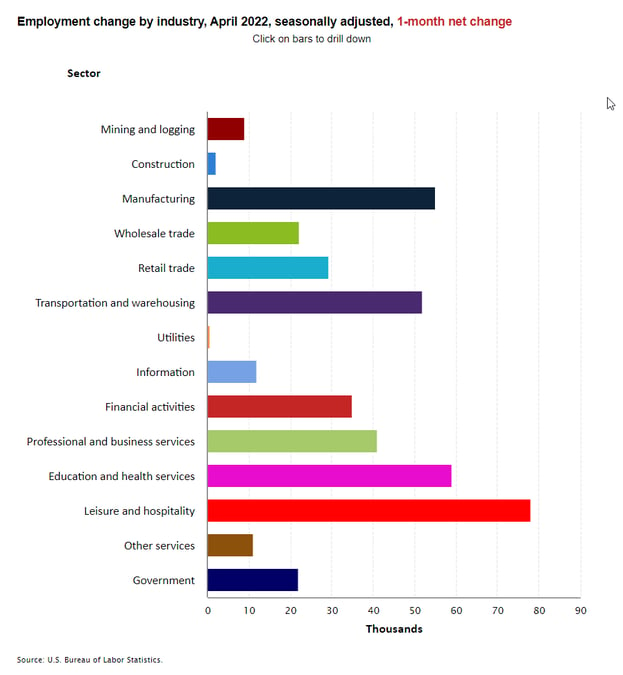 The April underemployment rate or the U-6 jobless rate was 7.0%, up from 6.9% in March 2022. This figure includes those who have quit looking for a job because they are discouraged about their prospects and people working part-time but desiring a full work week.