Employment Surges by 678,000 Positions in February, Despite Omicron

The Labor Department reported that nonfarm payrolls rose by 678,000 in February 2022. This was stronger than market expectations of an increase of 423,000 and occurred despite the impact of omicron on the economy. Revisions added 92,000 to total payrolls in the previous two months. Nevertheless, nonfarm payrolls were still down by 2.1 million or 1.4% from their pre-pandemic level in February 2020.

Concerns about rising wage costs and inflation are further supported by this report. While average hourly earnings for all employees on private nonfarm payrolls rose by a mere $0.01 in February to $31.58, this was still a gain of 5.1% from year-earlier levels. This was less than the 5.7% rise seen in January, however.

February’s stellar job growth along with the year-over-year increase in wages will support the Federal Reserve’s intention of raising interest rates at its upcoming March meeting. Chair (pro tempore) Jerome Powell indicated in his congressional testimony this week that, with Russia's attacks on Ukraine roiling markets and creating additional uncertainty, he was inclined to support a 25-basis point hike later this month and that the Fed should “proceed cautiously” with plans to tighten policy this year. 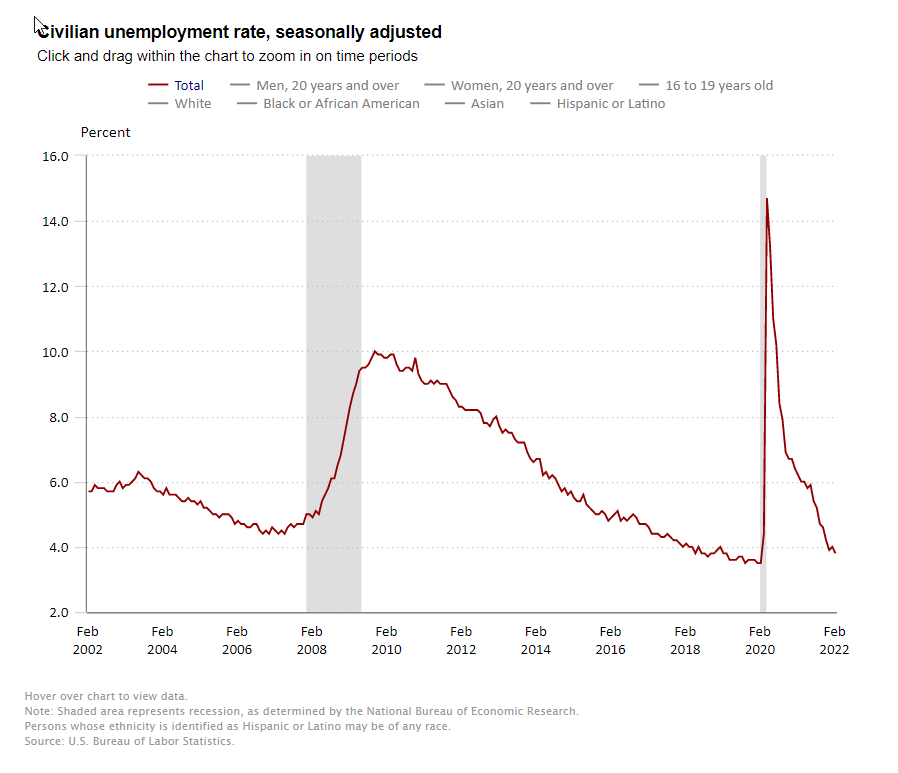 In a separate survey conducted by the BLS, the jobless rate fell by 0.2 percentage point to 3.8% in February 2022. The jobless rate is now 0.3 percentage points above the pre-pandemic level of 3.5% seen in February 2020, and well below the 14.7% peak seen in April 2020. The number of persons unemployed edged down to 6.3 million but was still above the 5.7-million-person level seen prior to the pandemic.

The underemployment rate or the U-6 jobless rate was 7.2%, up from 7.1% in January 2022. This figure includes those who have quit looking for a job because they are discouraged about their prospects and people working part-time but desiring a full work week.

Separately and earlier in the week, the Department of Labor reported that initial jobless claims fell by 18,000 in the week ending February 26th, to 215,000. This was the lowest level since late last year and well below the 290,000 reading in mid-January. In another separate report, the JOLTS data release by the U.S. Bureau of Labor Statistics showed that job openings were little changed at 10.9 million on the last business day of December. Hires and total separations decreased to 6.3 million and 5.9 million, respectively. The layoffs and discharges level and rate were at series lows of 1.2 million and 0.8 percent, respectively.

The bottom line is that worker shortages are limiting layoffs.