Employment Continues to Grow at a Fast Clip, Increasing by 431,000 in March, While the Jobless Rate Falls Close to Its Pre-Pandemic Level

As the economy continues to move back toward normalcy and away from the pandemic, the Labor Department reported that nonfarm payrolls rose by 431,000 in March 2022. The data suggest that the war in Ukraine and the surge in oil prices has not dampened hiring activity.

Overall job growth averaged 562,000 per month in the first quarter of 2022, the same as the average monthly gain for 2021. Revisions added 95,000 to total payrolls in the previous two months. Nevertheless, nonfarm payrolls were still down by 1.6 million or 1.0% from their pre-pandemic level in February 2020. The March increase in jobs was a bit weaker than market expectations of an increase of 490,000. 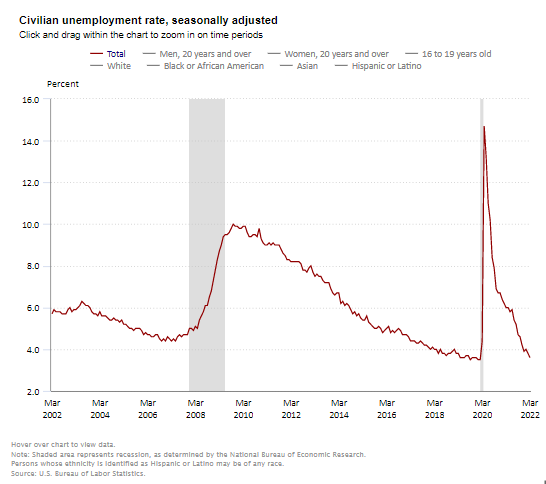 Concerns about rising wage costs and inflation are further supported by this report. Average hourly earnings for all employees on private nonfarm payrolls rose by $0.13 in March to $31.73. This was a gain of 5.6% from year-earlier levels and more than the 5.2% rise seen in February.

In a separate survey conducted by the BLS, the jobless rate fell by 0.2 percentage point to 3.6% in March 2022. The jobless rate is now only 0.1 percentage point above the pre-pandemic level of 3.5% seen in February 2020, and well below the 14.7% peak seen in April 2020. The number of persons unemployed declined by 318,000 to 6.0 million but was still above the 5.7-million-person level seen prior to the pandemic. 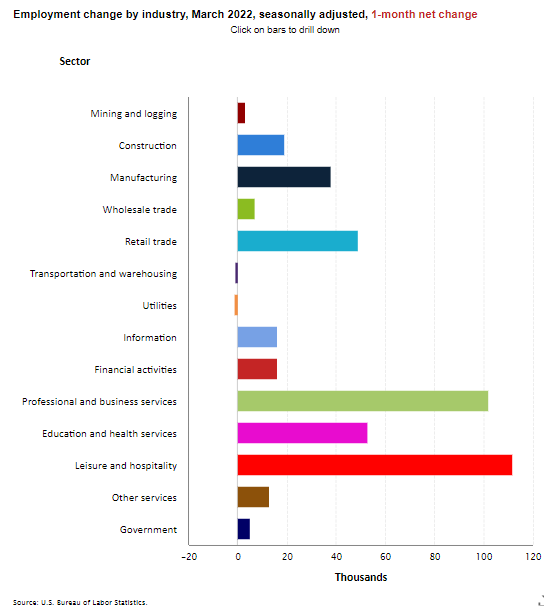 The report also showed that workers are returning to their place of work. Roughly 10.0% of employed persons teleworked because of the pandemic, down from 13.0% in the prior month, 23% in February 2021 and more than one third at the height of the pandemic.

The underemployment rate or the U-6 jobless rate was 6.9%, down from 7.2% in February 2022. This figure includes those who have quit looking for a job because they are discouraged about their prospects and people working part-time but desiring a full work week.

The data shows that the labor market continues to gain strength and wage growth is accelerating. The report supports the Federal Reserve’s intention of raising interest rates further following the 0.25 percentage point hike in the fed funds rate at its recent March meeting.