Employment Up 467,000 Positions in January, Despite Omicron

The Labor Department reported that nonfarm payrolls rose by 467,000 in January 2022. This was stronger than market expectations of an increase of 125,000 and occurred despite the impact of Omicron on the economy. Many analysts had expected the employment numbers to be negatively affected by absenteeism and self-isolation driven by the Omicron virus wave. January’s gain compared relatively favorably to the average monthly gain of 555,000 seen in 2021 and will support the Federal Reserve’s intention of raising interest rates as soon as March. Revisions added 709,000 to total payrolls in the previous two months. Nonfarm payrolls have now increased by 19.1 million since their pandemic trough in April 2020 but are still down by 2.9 million or 1.9% from their pre-pandemic level in February 2020.

Concerns about rising wage costs and inflation are further supported by this report. Average hourly earnings for all employees on private nonfarm payrolls rose by $0.23 in January to $31.63, a gain of 5.7% from a year earlier. 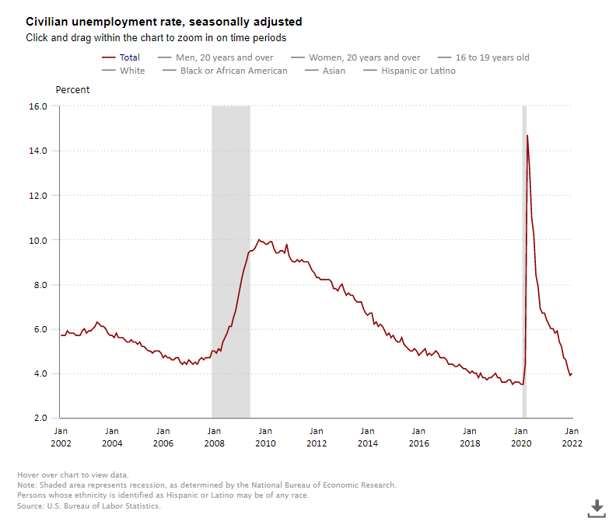 The underemployment rate or the U-6 jobless rate was 7.1%, down from 7.3% in December 2021. This figure includes those who have quit looking for a job because they are discouraged about their prospects and people working part-time but desiring a full work week.

Overall employment in health care was up by 18,000 positions in January but is down by 359,000 or 2.3% from its February 2020 level. And within health care, nursing and residential care facilities was largely unchanged from December at 2.98 million positions but was down 120,000 from year-earlier levels.