In a new question in the Wave 41 survey, respondents were asked whether they found the acuity of new resident move-ins to have increased, decreased, or stayed the same as compared to before the pandemic. Significantly, move-in acuity has increased for 71% of the respondents with assisted living, and for more than 60% of respondents with memory care units and nursing care beds. In independent living settings, 41% of respondents report acuity having increased since before the pandemic. The shares of organizations reporting acceleration in nursing care move-ins continued to increase – from 21% in Wave 37 conducted in January 2022 to 68% in Wave 41. This marks the fourth consecutive wave where the pace of nursing care move-ins has increased from the prior wave. Over one-half of respondents to the Wave 41 survey (53%) reported lead volumes above pre-pandemic levels in May – a noteworthy increase from the Wave 38 survey reflecting results in February (33%).

NIC’s Executive Survey of senior housing and skilled nursing operators was implemented in March 2020 to deliver real-time insights into the impact of the pandemic and the pace of recovery. In its third year, the “ESI” is transitioning away from the COVID-19 crisis to focus on timely industry topics. While some standard questions will remain for tracking purposes, in each new survey "wave," new questions are added.

This Wave 41 survey includes responses from May 2 to May 27, 2022, from owners and executives of 60 small, medium, and large senior housing and skilled nursing operators across the nation, representing hundreds of buildings and thousands of units across respondents’ portfolios of properties. More detailed reports for each “wave” of the survey and a PDF of the report charts can be found on the NIC COVID-19 Resource Center webpage under Executive Survey Insights.

In a new question in the Wave 41 survey, respondents were asked whether they found the acuity of new resident move-ins to have increased, decreased, or stayed the same as compared to before the pandemic started. Of note, increased move-in acuity was reported by 71% of the respondents for assisted living, 61% in memory care, and 62% in nursing care. Only 41% of independent living reported increased resident acuity at move-in. 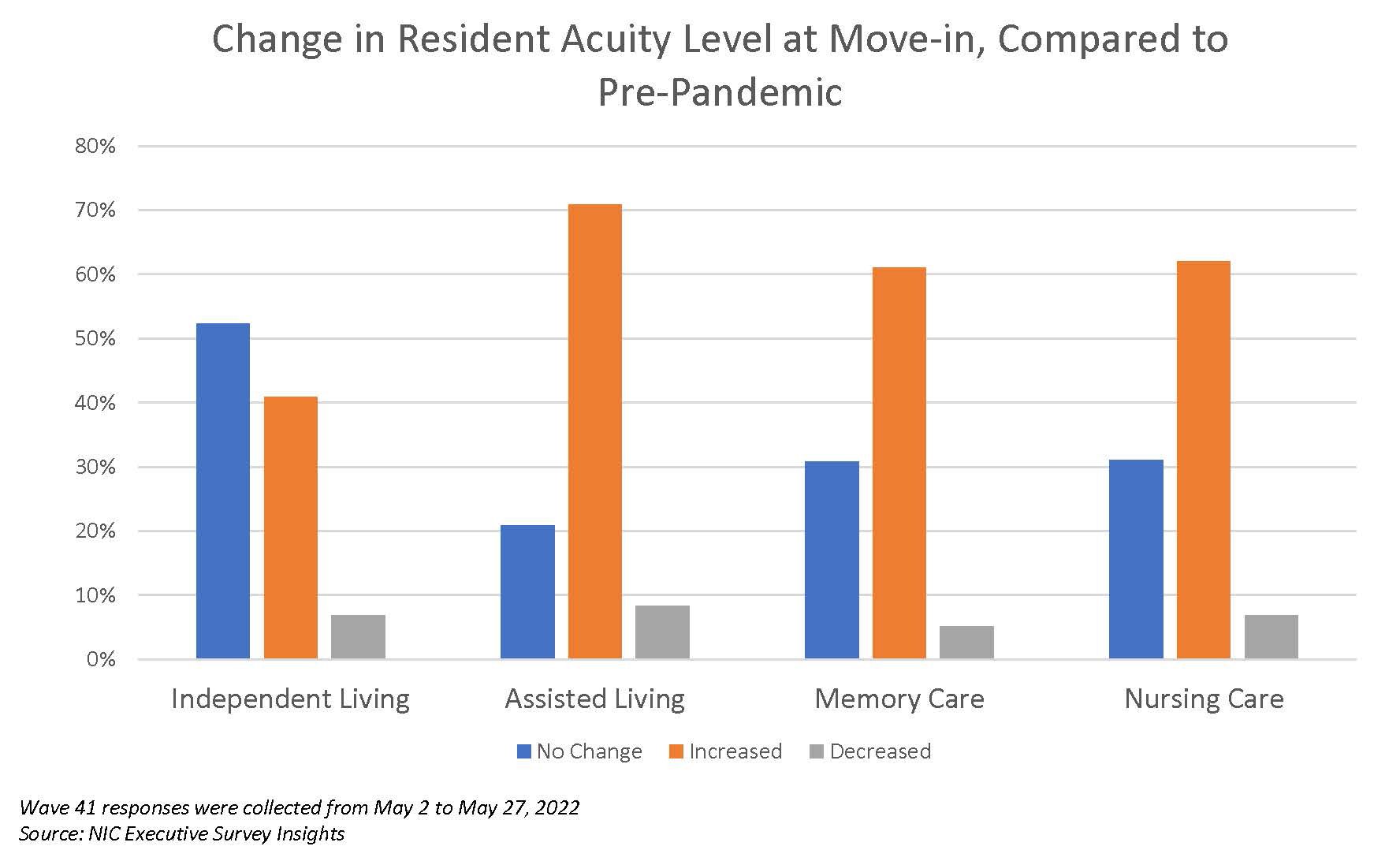 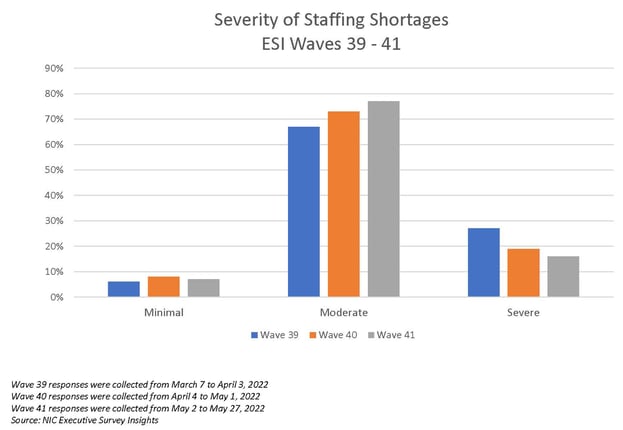 Despite fewer reports of severe staffing shortages, attracting community and caregiving staff remains to be a top challenge cited by operators (83%). Rising operating expenses (80%) and staff turnover (63%) follow as the second and third most reported challenges.

The timeline below shows the share of organizations reporting an increase in the pace of move-ins during the prior 30-days. Data from the Wave 41 survey shows that the increase in pace of move-ins continues to be above the levels reported in Waves 32 through 38. This is an encouraging sign that recovery is continuing. 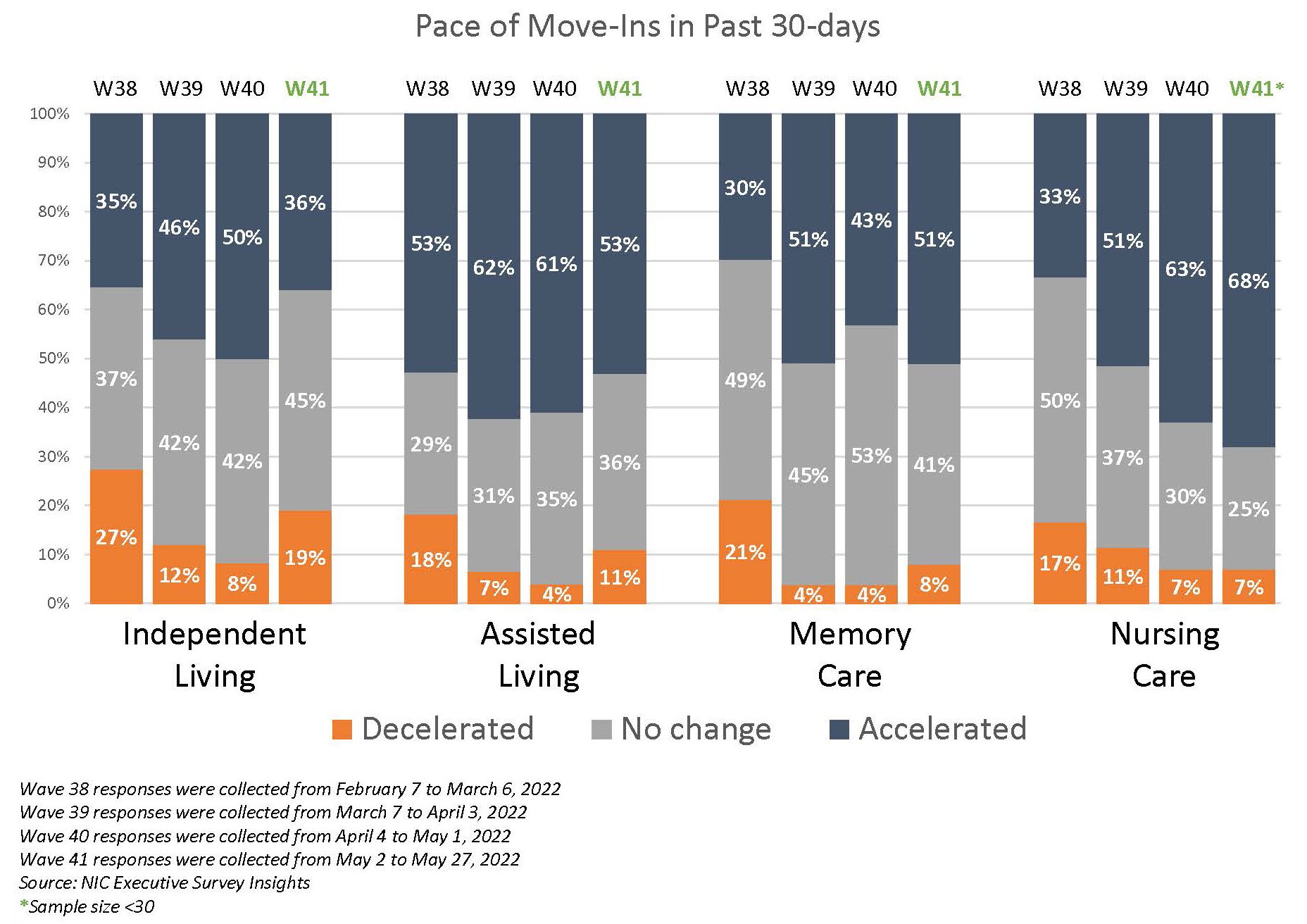 Despite the positive trend in the accelerated pace of nursing care move-ins, it is important to balance this with the corresponding pace of move-outs, which also showed an accelerated pace since Wave 39 in March. 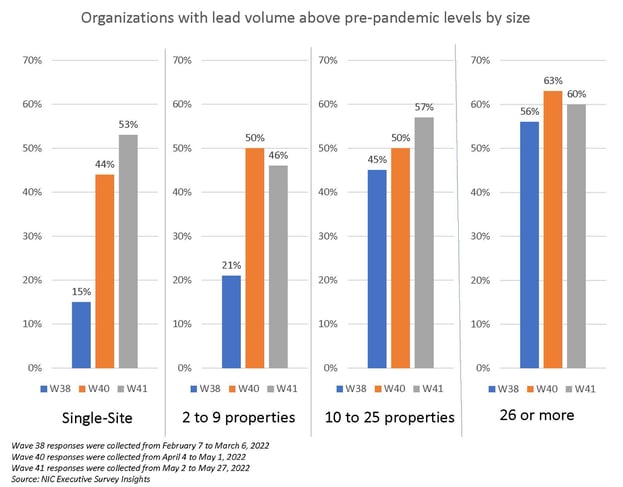 Owners and C-suite executives of senior housing and care properties, please help us tell an accurate story about our industry’s performance. If you are an owner or C-suite executive of senior housing and care and have not received an email invitation to take the survey, please contact Ryan Brooks at rbrooks@nic.org to be added to the list of recipients.

NIC wishes to thank respondents for their valuable input and continuing support for this effort to provide the broader market with a sense of the evolving landscape as we recover from the pandemic. This is your survey! Please take the Wave 42 survey and suggest new questions for Wave 43.

Senior Principal Ryan Brooks works with the research team in providing research, analysis, and contributions in the areas of healthcare collaboration and partnerships, telemedicine implementation, EHR optimization, and value-based care transition. Prior to joining NIC, he served as Clinical Administrator for multiple service lines within the Johns Hopkins Health System, where he focused on patient throughput strategies, regulatory compliance, and lean deployment throughout the organization. Brooks received his Bachelor’s in Health Services Administration from James Madison University and his Master’s in Business Administration from the University of Maryland.