The Labor Department reported that nonfarm payrolls rose by 638,000 in October and that the unemployment rate fell to 6.9% from 7.9% in September. This suggests that the employment recovery from the COVID-related drop in March and April continues. Moreover, the increase is stronger than it seems on the surface because it includes a 147,000 decline in temporary Census workers. The consensus estimates for October had been for a gain of 580,000.

Roughly 12.1 million jobs have been recovered during the May to October period. This is a little more than half the 22.2 million jobs lost since the pandemic began. The pace of improvement is slowing, however. In July, the economy added almost 1.8 million jobs and another 1.5 million in August. Gains slowed to 672,000 in September and 638,000 in October 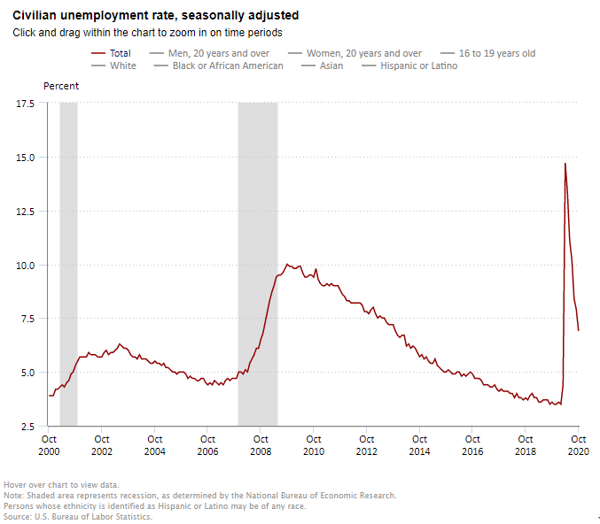 Health care added 58,000 jobs in October, with the largest gains occurring in hospitals, offices of physicians and dentists and outpatient care centers. These increases were partially offset by a decline of 9,000 workers in nursing and residential care facilities.

The number of long-term unemployed (those jobless for 27 weeks or more) increased by 1.2 million to 3.6 million, a figure that suggests that is continues to be a very challenging time for many Americans. Long-term unemployed persons account for 32.5% of the total number of unemployed persons. The number of permanent job losers fell 72,000 to 3.7 million. Moreover, a separate report issued yesterday on unemployment insurance claims showed that more than 21 million workers remain on government assistance in the week ended October 17.

The underemployment rate or the U-6 jobless rate fell to 12.1% in October from 12.8% in September. This figure includes those who have quit looking for a job because they are discouraged about their prospects and people working part-time but desiring a full work week.

Average hourly earnings for all employees on private nonfarm payrolls rose by $0.04 in October to $29.50, a gain of 4.5% from a year earlier. The large employment fluctuations over the past several months, especially in industries with lower-paid workers—complicate the analysis of recent trends in average hourly earnings. 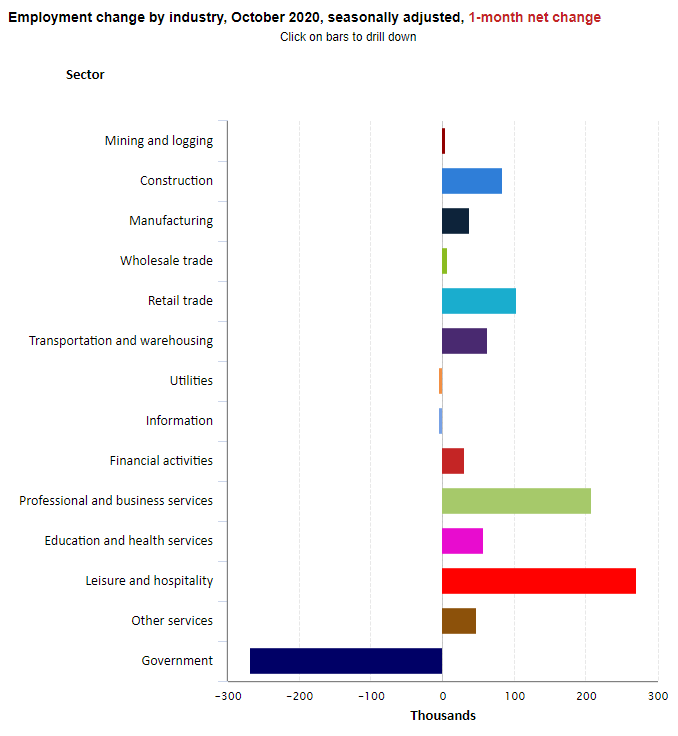 The change in total nonfarm payroll employment for August was revised up by 4,000 from 1,489,000 to 1,493,000 and the change for September was revised up by 11,000 from 661,000 to 672,000. Combined, 15,000 jobs were added to the original estimates. Monthly revisions result from additional reports received from businesses and government agencies since the last published estimates and from the recalculation of seasonal factors.

While the October gain in jobs is welcome news, the labor market continues to be strained and the recent spike in the virus across many states could hamper further gains. Indeed, many states are backtracking plans to reopen as coronavirus infections are rising again. As a result, many economists continue to urge Congress and the White House to implement further fiscal stimulus to keep the recovery on track. Some anticipate that without a fiscal stimulus package the recession will deepen further. Moreover, uncertainty about the path of the COVID-19 virus as we enter the fall and winter months as well as the lack of a vaccine continue to weigh on business owners hiring decisions.