Jobless Rate Slips Back to 11.1% in June, but Still Remains High

The Labor Department reported that nonfarm payrolls rose by 4.8 million in June and that the unemployment rate fell to 11.1%. This is decidedly good news and suggests that the employment recovery from the precipitous COVID-related drop in March and April continues to reverse course. Combined, 7.5 million jobs were generated in May and June, recouping some of the 22.2 million jobs lost in March and April. Said another way, the June level of payrolls was 14.7 million below February’s. 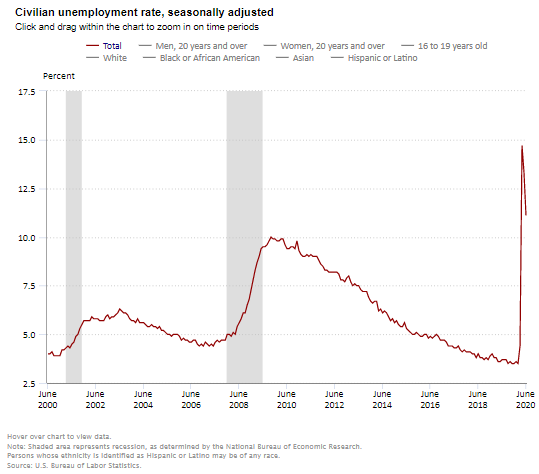 While the June improvement is welcome news, the labor market continues to be strained and the recent spike in the virus across many states could hamper further gains. Indeed, some states are backtracking plans to reopen as coronavirus infections are rising again. Additionally, today’s job report is based on survey data collected in mid-June and doesn’t yet reflect recent government-mandated business closures and subsequent layoffs.

The biggest factor behind the rebound in June’s employment level was the reopening of many businesses, such as the leisure and hospitality sectors, which added over 2 million jobs and retail which added 740,000. The resumption of routine medical appointments may also be helping, with health care employment rising by 358,000 over the month, with gains in offices of dentists (+190,000), offices of physicians (+80,000), and offices of other health practitioners (+48,000). Job losses continued in nursing care facilities (-18,000).

The June unemployment rate of 11.1% was down from 13.3% in May but is still quite elevated by historic standards and significantly higher than the 50-year low of 3.5% in February. The drop occurred despite the BLS reporting that the misclassification of pandemic-affected workers as ‘employed” over the past few months declined significantly in June.

The underemployment rate or the U-6 jobless rate fell to 18.0% in June from 21.1% in May. This figure includes those who have quit looking for a job because they are discouraged about their prospects and people working part-time but desiring a full work week. In the previous 2008/2009 recession, this rate peaked at 17.2%.

The change in total nonfarm payroll employment for April was revised down by 100,000 from a loss of 20.7 million to a loss of 20.8 million and the change for May was revised up by 190,000 from a gain of 2.5 million to a gain of 2.7 million. Combined, 90,000 jobs were added to the original estimates. Monthly revisions result from additional reports received from businesses and government agencies since the last published estimates and from the recalculation of seasonal factors. Market expectations for June had been for a gain of 3.1 million jobs.

Average hourly earnings for all employees on private nonfarm payrolls fell by $0.35 in June to $29.37, a decline of 1.1% from the prior month but up 5.0% from a year earlier. The decrease in average hourly earnings reflects job gains among lower-paid worker which put downward pressure on the earnings estimates.

The labor force participation rate, which is a measure of the share of working age people who are employed or looking for work rose to 61.5% from 60.8% in May.

Separately, the Department of Labor reported that the number of new applications for jobless benefits fell by 55,000 to 1.43 million last week. Unemployment claims have come down from a peak of nearly 7 million in late March but have stabilized near a historically high 1.5 million as companies continue to cut jobs.