Jobs Increase by 2.5 million in May and Jobless Rate Retreats

The Labor Department reported that jobs rose by 2.5 million in May, while the jobless rate fell to 13.3%, a surprising outcome given the severity of pandemic-related lockdowns on the economy and other recent less bullish measures of economic performance. The increase in May followed a loss in jobs of 20.7 million in April, which was the largest decline in records dating back to 1939. Analysts had predicted an increase in the employment rate to 19% and a decline of 7.5 million jobs in payrolls. 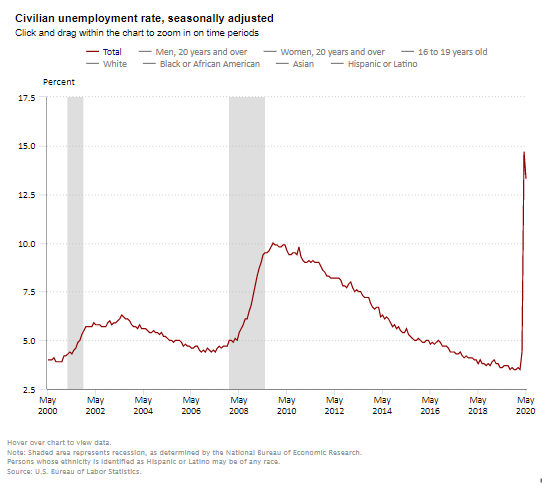 The underemployment rate or the U-6 jobless rate slipped back to 21.2% from 22.8% in April.
This figure includes those who have quit looking for a job because they are discouraged about their prospects and people working part-time but desiring a full work week. In the previous 2008/2009 recession, this rate peaked at 17.2%.

In the BLS report, the following comment was provided to explain the surprising drop in jobless number: “If the workers who were recorded as employed but absent from work due to "other reasons" (over and above the number absent for other reasons in a typical May) had been classified as unemployed on temporary layoff, the overall unemployment rate would have been about 3 percentage points higher than reported (on a not seasonally adjusted basis). However, according to usual practice, the data from the household survey are accepted as recorded. To maintain data integrity, no ad hoc actions are taken to reclassify survey responses.” 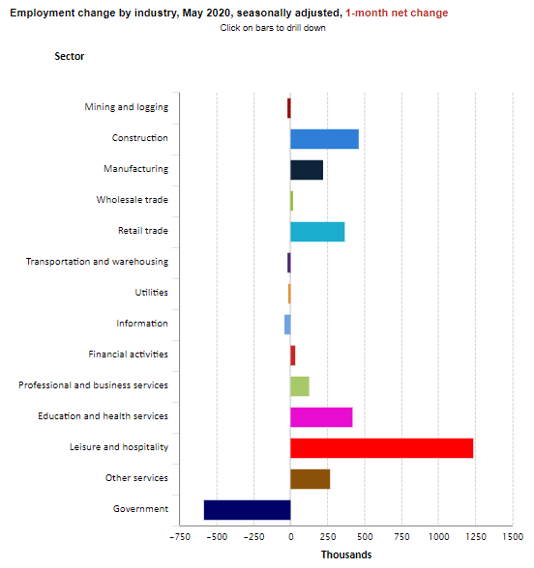 Average hourly earnings for all employees on private nonfarm payrolls rose in May fell by 29 cents to $29.75 but was up 6.7% from year-earlier levels.

The labor force participation rate, which is a measure of the share of working age people who are employed or looking for work edged up by 0.6 percentage point to 60.8%. Total employment, as measured by the household survey rose by 3.8 million in May to 137.2 million, following a large decline in April.

Separately, the Labor Department reported yesterday that initial claims for unemployment insurance totaled 1.9 million jobs in the week ending May 30. Continuing claims, a measure of ongoing unemployment reported with a one-week lag increased to 21.5 million. Also the Federal Reserve’s Beige Book showed economic activity continuing to deteriorate even in regions that started to remove lockdown measures at the end of April and the beginning of May, suggesting a rebound in jobs will still be limited.

Today’s report was much stronger than expected and is welcome news because it could indicate that the labor market is starting to stabilize. However, while some businesses may gradually return to “normal”, not every sector will recover at the same pace. In the meanwhile, and tragically, millions of people are suffering from illnesses, anxieties and deaths associated with the pandemic and from the human tragedies associated with of the collapse in the national and global economies.