Looking into the Future:  How Much Seniors Housing Will Be Needed?

A frequent question NIC receives is how much seniors housing will be needed for tomorrow’s aging baby boomers.  Using the most recent U.S. Census population projections, NIC has estimated the number of seniors housing units that will be needed through 2040.   Since projections are as much art as they are science, we have also created a few scenarios that project needed new supply based on different penetration rates and different household age cohorts.

It is important to note however that these projections are based solely on demographics and do not consider consumer preferences. This is particularly important because the emerging cohort for seniors housing is the baby boomers and they are known as a generation that does not do things the same way as prior generations.  Hence, assumptions on future usage and penetration rates may be different than today. 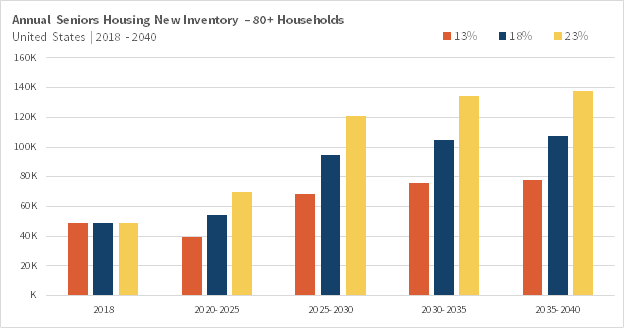 Conclusion.  This analysis presents several scenarios that project future seniors housing needs at different penetration rates.  In aggregate, the results show that significantly more housing will be needed for America’s aging population if today’s penetration rate is maintained or grows over the long term.  Moreover, even if the penetration rate were to decline, sheer demographics will support future inventory growth, as the lower 13% penetration rate for the 80-plus household cohort scenario shows.

As stated at the beginning of this article, it is also important to keep in mind that these estimates are solely based on demographic demand and do not consider changing consumer preferences regarding their housing and care needs.