The Labor Department reported that nonfarm payrolls inched up by 49,000 in January and that the unemployment rate fell 0.4 percentage points to 6.3%. The consensus estimates for January had been for a gain of 105,000 jobs. Through January, 9.9 million jobs have been lost since February. 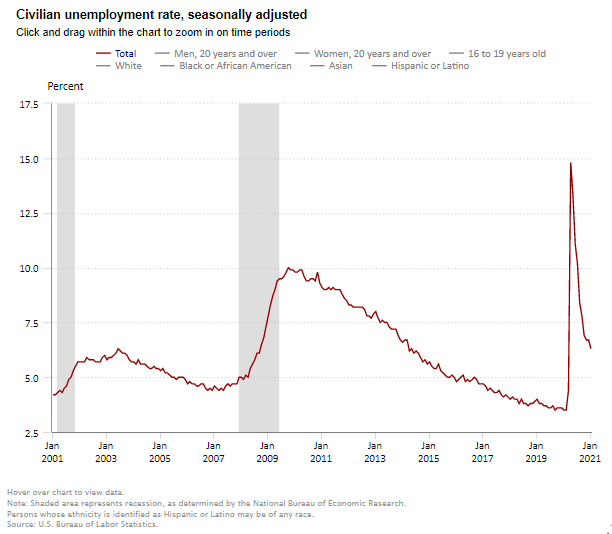 The share of employed people who teleworked because of the coronavirus was 23.2% in January. This data refers to employed persons who teleworked or worked at home for pay at some point in the prior four weeks due to the pandemic. Separately, an estimated 14.8 million people reported that they had been unable to work because their employer closed or lost business due the pandemic. This was 1.1 million less than in December.

The unemployment rate fell 0.4 percentage point to 6.3% in January from 6.7% in December. It remains 2.8 percentage points above the pre-pandemic level of 3.5% seen in February, but well below the 14.7% peak seen in April. The number of long-term unemployed (those jobless for 27 weeks or more) was little changed from December at 4.0 million and accounted for 39.5% of the total number of unemployed persons. The underemployment rate or the U-6 jobless rate fell to 11.1% in January from 11.7% in December. This figure includes those who have quit looking for a job because they are discouraged about their prospects and people working part-time but desiring a full work week.

Average hourly earnings for all employees on private nonfarm payrolls rose by $0.06 in January to $29.96, a gain of 5.4% from a year earlier. These increases largely reflect the disproportionate number of lower paid workers in leisure and hospitality who went off payrolls, which put upward pressure on the average hourly earnings estimates. The large employment fluctuations over the past several months--especially in industries with lower-paid workers-complicate the analysis of recent trends in average hourly earnings.

The labor force participation rate, which is a measure of the share of working age people who are employed or looking for work was 61.4% in January and was 1.9 percentage points lower than February 2020.

The change in total nonfarm payroll employment for November was revised down by 72,000 from 336,000 to 264,000 and the change for December was revised down by 87,000 from a loss of 140,000 to a loss of 227,000. Combined, 159,000 jobs were removed from the original estimates.   Monthly revisions result from additional reports received from businesses and government agencies since the last published estimates and from the recalculation of seasonal factors. 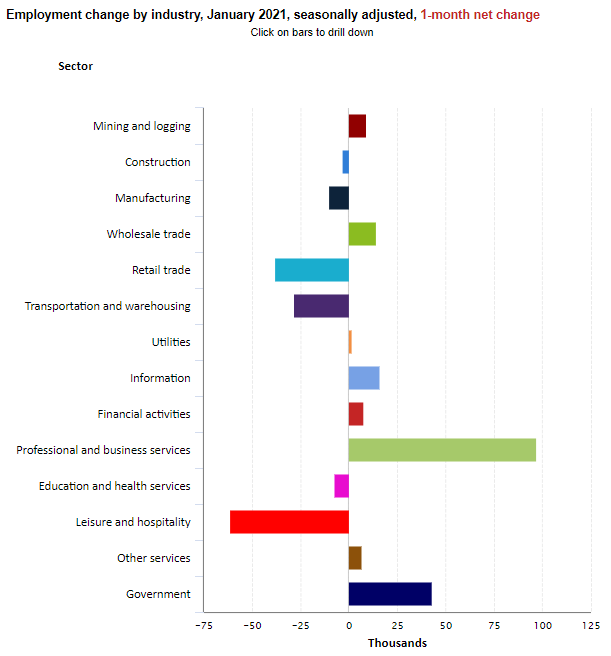 The limited job gains in January stem from pandemic-related restrictions in business operations and reflects the large number of newly diagnosed COVID-19 infections. Many states have re-imposed lockdowns. Widespread distribution of vaccines is needed to allow for a more complete re-opening of the economy and a recovery in jobs. Congress needs to act to implement further fiscal stimulus to support a recovery, although the effects of the $900 billion federal relief package enacted in December have not been broadly felt yet. Without further fiscal stimulus, the economy is likely to sputter until a vaccine can be safely and widely distributed.