The Labor Department reported that nonfarm payrolls rose by 245,000 in November and that the unemployment rate fell to 6.7% from 6.9% in October.  This suggests that the employment recovery from the COVID-related drop in March and April continues, but at a decelerating pace.  The consensus estimates for November had been for a gain of 470,000.  In November, nonfarm employment was below its February level by 9.8 million jobs or by 6.5%. 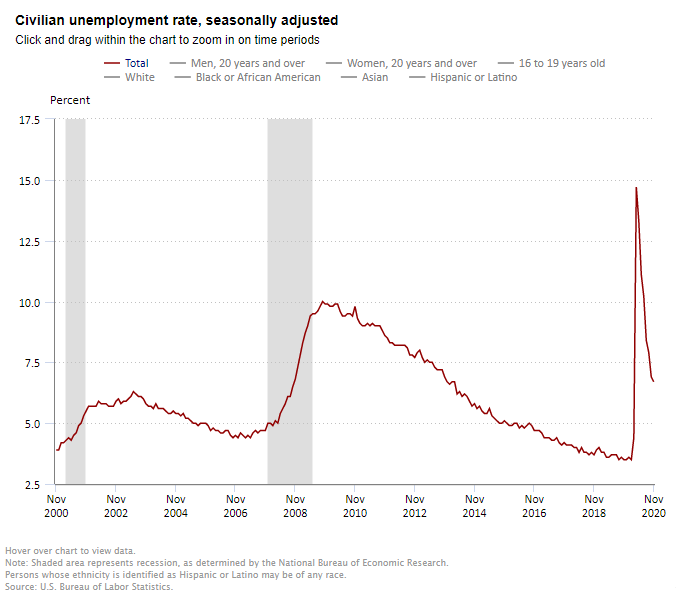 The 0.2 percentage point drop in the November unemployment rate to 6.7% marked the seventh consecutive month of improvement.  It is 3.2 percentage points above the pre-pandemic level of 3.5% seen in February, however, but well below the 14.7% peak seen in April.

The underemployment rate or the U-6 jobless rate fell to 12.0% in November from 12.1% in October.  This figure includes those who have quit looking for a job because they are discouraged about their prospects and people working part-time but desiring a full work week.

Average hourly earnings for all employees on private nonfarm payrolls rose by $0.09 in November to $29.58, a gain of 4.4% from a year earlier.  The large employment fluctuations over the past several months, especially in industries with lower-paid workers—complicate the analysis of recent trends in average hourly earnings. 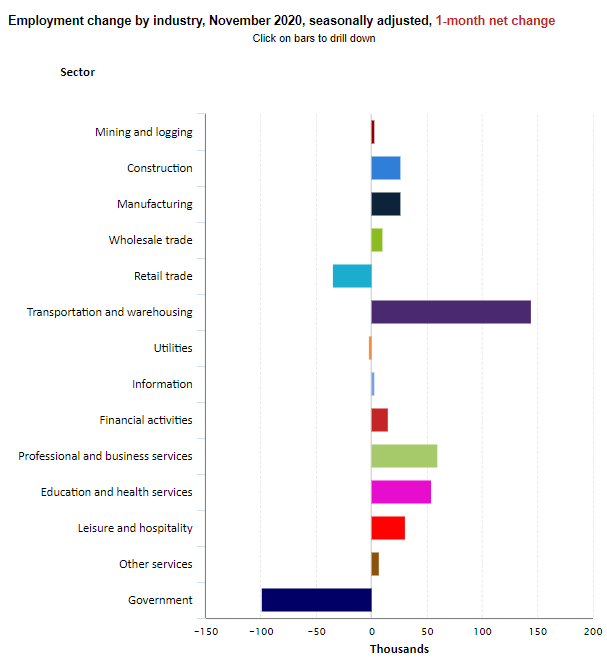 The labor force participation rate, which is a measure of the share of working age people who are employed or looking for work slipped to 61.5% in November, down from 61.7% in October.  The employment-population ratio was little changed at 57.3% in November and is 3.8 percentage points lower than in February.

The change in total nonfarm payroll employment for September was revised up by 39,000 from 672,000 to 711,000 and the change for October was revised down by 28,000 from 638,000 to 610,000.   Combined, 11,000 jobs were added to the original estimates.   Monthly revisions result from additional reports received from businesses and government agencies since the last published estimates and from the recalculation of seasonal factors.

The slowdown in monthly gains in employment is troubling.  Further weakness in employment growth is likely due to the ongoing large number of newly diagnosed COVID-19 infections and its impact on business closures and job security.  Many states are re-imposing lockdowns.  Congress needs to act to implement further fiscal stimulus to keep the recovery on track.  Without a fiscal stimulus package, the recession is likely to deepen until a vaccine can be safely and widely distributed.