Record Decline of 20.5 million Jobs in April, As Stay at Home Orders Cause Massive Job Losses

The Labor Department reported that there were a nose-bleedingly high 20.5 million jobs lost in April as the COVID-19 pandemic closed much of the economy and triggered massive layoffs and furloughs of employees by U.S. businesses. This dwarfed the previous record high job loss of 1.96 million jobs in 1945 at the end of WWII and the 8.7 million jobs lost during the entire last recession. Employment is now at its lowest level since February 2011. April’s decline also marked the second monthly decline in jobs after a record 113 consecutive months of job gains. 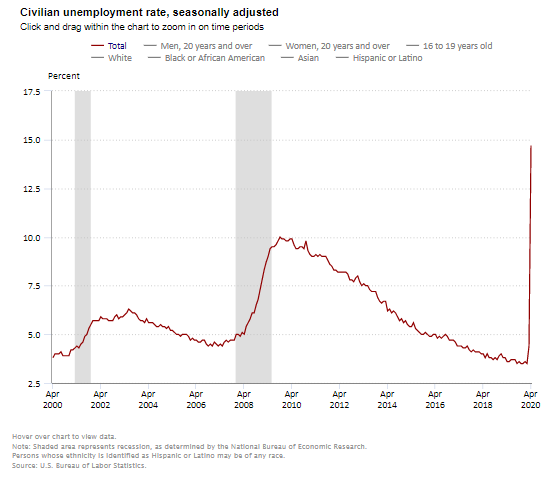 Separately, the April unemployment rate surged to 14.7%, up from 4.4% in March and from a 50-year low of 3.5% in February. This is the highest jobless level since the Great Depression according to the Labor Department figures that date back to the 1940s and the National Bureau of Economic Research data prior to that. During the 2008/2009 recession, the unemployment rate peaked at 10%.

The underemployment rate or the U-6 jobless rate soared to 22.7% in April from 8.7%. This figure includes those who have quit looking for a job because they are discouraged about their prospects and people working part-time but desiring a full work week. In the previous 2008/2009 recession, this rate peaked at 17.2%.

Employment fell sharply in all major industry sectors, with particularly heavy job losses in leisure and hospitality. Employment in health care fell by 1.4 million in April. The decline in healthcare reflects those not working to fight the pandemic because they are seeing fewer patients for routine checkups and, in some cases, only offering emergency procedures. 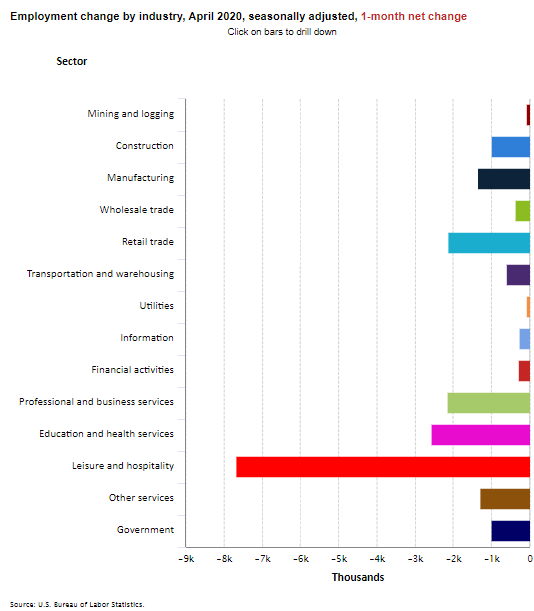 Revisions also subtracted thousands of jobs in the prior two months. The change in total nonfarm payroll employment for February was revised down by 45,000 from a gain of 275,000 to a gain of 230,000 and the change for March was revised down by 169,000 from a loss of 701,000 to a loss of 870,000. Combined, 214,000 jobs were subtracted to the original estimates. Monthly revisions result from additional reports received from businesses and government agencies since the last published estimates and from the recalculation of seasonal factors.

The labor force participation rate, which is a measure of the share of working age people who are employed or looking for work fell 2.5 percentage point to 60.2%. Total employment, as measured by the household survey fell by 22.4 million to 133.4 million.

Separately yesterday, the Department of Labor reported that 3.2 million Americans filed for unemployment insurance benefits in the week ending May 2, 2020. In the past seven weeks, 33 million people have filed claims.

Today’s report was not unexpected as the pandemic has dramatically halted economic activity across the nation and globe. The question becomes how long the devastation will continue, which in turn largely depends on COVID-19 related factors such as when a vaccine become available, testing of the general population and when business are able to reopen. Even then while some businesses may gradually return to “normal”, not every sector will recover at the same pace. In the meanwhile, and tragically, millions of people are suffering from illnesses, anxieties and deaths associated with the pandemic and from the human tragedies associated with of the collapse in the national and global economies.