The Labor Department reported that nonfarm payrolls rose by 531,000 in October 2021. The consensus had been for an increase of 312,000. This was an acceleration from September when jobs grew by an upwardly revised 312,000 (originally reported as 194,000) and from August when jobs increased by 483,000, up from 366,000 as originally reported. Through October, the year-to-date monthly average job gain has been 582,000. Nonfarm payrolls have now increased by 18.2 million since its pandemic trough in April 2020 but are still down by 4.2 million or 2.8% from their pre-pandemic level in February 2020.

Separately and from a different survey, the Labor Department reported that the supply of labor as measured by the labor force rose by a muted 104,000 in October, well short of population growth. With the household measure of employment rising by 359,000, the jobless rate fell to 4.6% from 4.8% in September. The labor force is 3.0 million below the February 2020 level. Many had speculated that the labor force would increase since enhanced unemployment benefits had largely expired, and schools largely reopened. The jobless rate is now 1.1 percentage points above the pre-pandemic level of 3.5% seen in February 2020, but well below the 14.7% peak seen in April 2020. 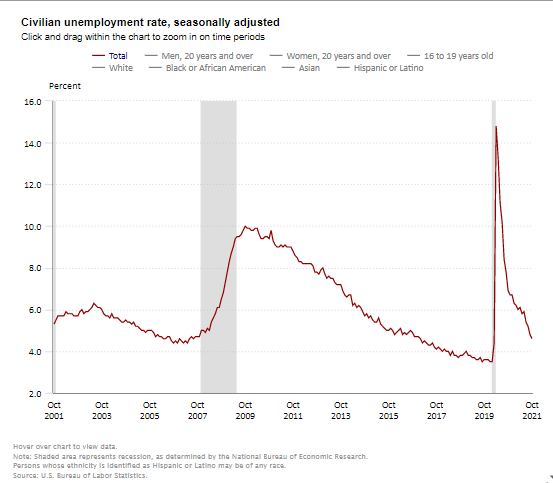 The underemployment rate or the U-6 jobless rate was 8.3% down from 8.5% in September 2021. This figure includes those who have quit looking for a job because they are discouraged about their prospects and people working part-time but desiring a full work week.

The data show that the U.S. recovery from the pandemic continues. The COVID-19 Delta variant likely weighed on the economy in August and September as lower job numbers suggested. Employment in the leisure and hospitality industry increased by 164,000 in October and has risen by 2.5 million thus far in 2021, but it is still down by 1.4 million or 8.2% from February 2020. 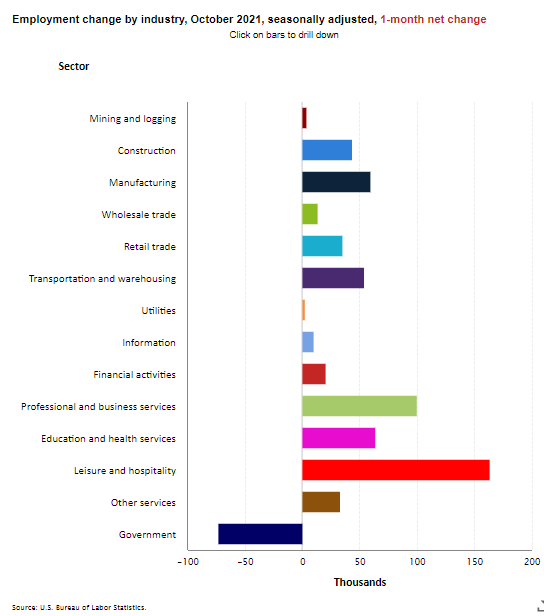 Indeed, average hourly earnings for all employees on private nonfarm payrolls rose by $0.11 in October to $30.96, a gain of 4.9% from a year earlier, the strongest year-over-year gain February 2021. With the mix of job gains in October skewed towards low-wage workers, the 4.9% gain may be understating wage growth. The data suggests that rising demand for labor associated with the recovery from the pandemic is putting upward pressure on wages.

Soon after their Federal Open Market Committee meeting (FOMC) in Washington D.C. this week, the Fed announced that they are ready to shift gears and are relaxing their aggressive bond buying program, a necessary precursor to allow the Fed to increase interest rates more freely when and if they view inflation as too serious a threat to stable economic growth. Moving too fast on an interest rate increase could crush the path of economic growth and moving too slowly could cause inflation to become embedded in the economy. Such a discussion has not been the focus of policy makers and pundits for more than 30 years.