Stakeholders at 2021 NIC Fall Conference weigh in on the latest trends.

Considering the dramatic impact of the pandemic on senior housing and care, it’s surprising how well valuations have held up over the last two years. Investors like what they see. The worst seems to be over as the Omicron variant subsides. Occupancy is recovering. Demand is projected to only get stronger from pent-up demand in the near-term and demographic trends in the longer term.

“Senior living is headed in a positive direction,” said Zach Bowyer, managing director at JLL. He co-hosted a session on valuations at the 2021 NIC Fall Conference along with Ben Firestone, executive managing director & co-founder at Blueprint.

In a fun twist, the session was patterned after SNL’s “Weekend Update.” The hosts interviewed guest panelists about the latest valuations news. 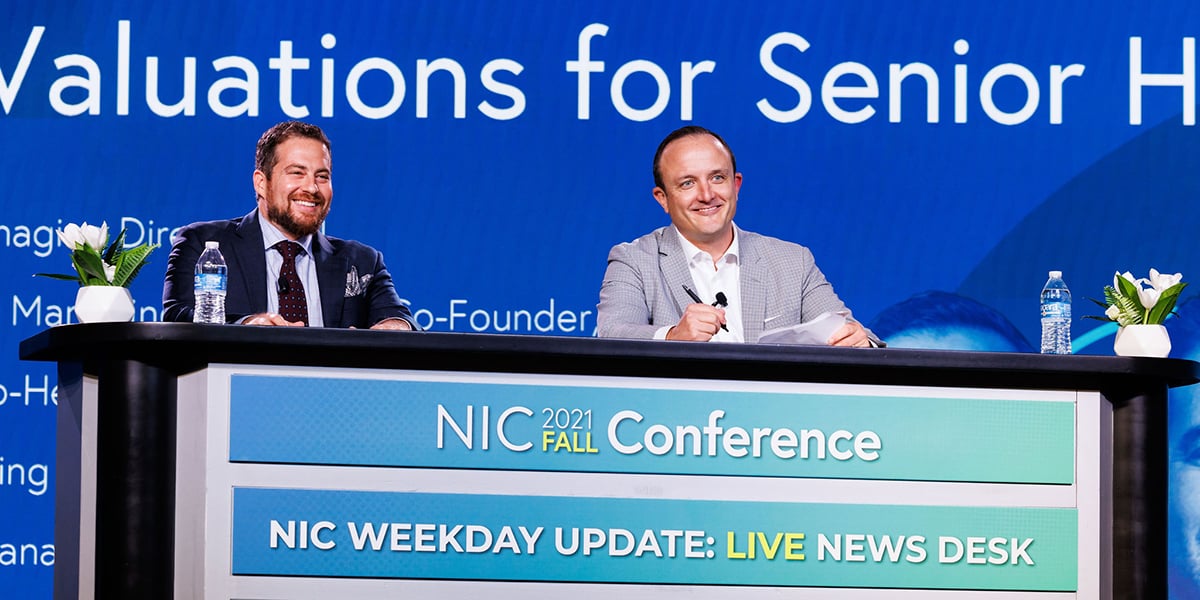 Providing context, Bowyer noted that total commercial real estate transaction volume (all property types) totaled $450 billion through the end of the third quarter of 2021. That level of investment had not been seen since 2007. “There’s a lot of capital chasing commercial real estate,” he said.

Valuations on individual senior housing and care properties vary quite a bit. Bowyer showed the difference in performance among four properties. “The devil is in the details,” he said. In general, Bowyer expects occupancy to restabilize at 90-91% in three years. And he thinks increased consumer demand will require supply growth to eventually double.

Up next was Stephen Monroe, managing director at Levin Associates. He writes about the sector, so the moderators asked about the biggest stories of the pandemic. “The big story was census,” said Monroe. His firm researched 11 straight years of assisted living occupancy and found that it never increased in the first quarter of any single year. Occupancy might not be back to pre-pandemic levels until 2025.

Monroe worries that a “new normal” could be lower occupancies going forward. The market could get overbuilt if multifamily developers jump into senior housing sensing a big demand from baby boomers. “There might not be the demand they expect,” said Monroe. 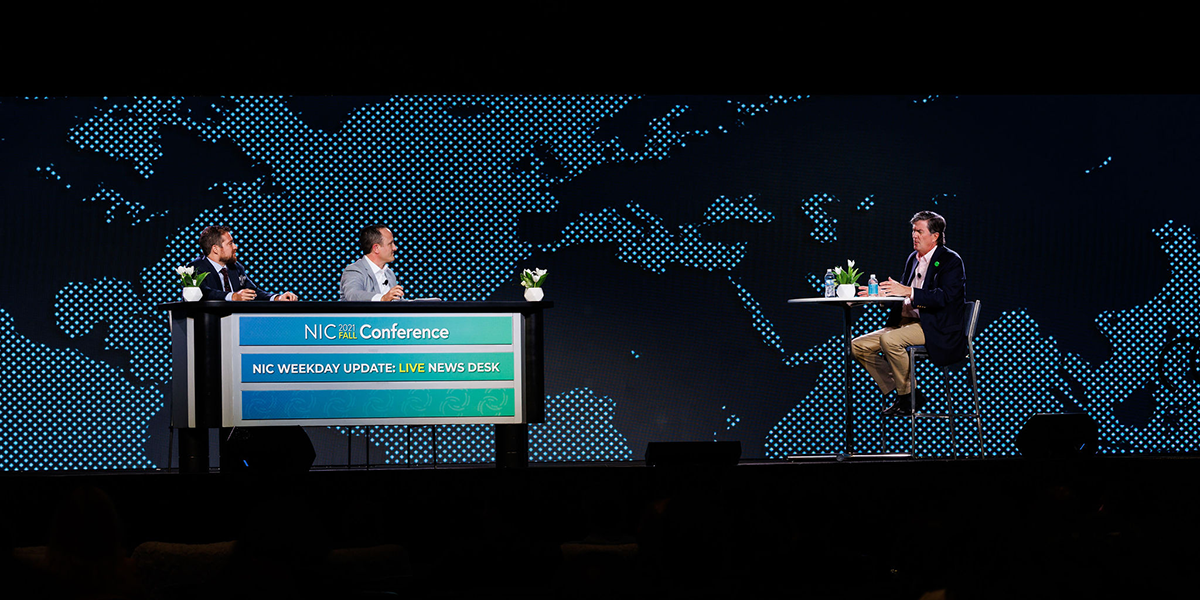 The biggest story for the next decade will be the labor shortage, according to Monroe. A flood of new capital and development without a better labor situation could result in lower equity yields because of higher labor expenses. “The industry has to be a leader in wages,” said Monroe.

Nikhil Chaudhri spoke about valuations from the REIT perspective. He is senior vice president, co-head of U.S. Investments at Welltower.

In the last 18 months, Welltower deployed $6 billion, predominantly to purchase senior living properties. “This has been a good opportunity to purchase properties at low values,” she noted.

Government assistance helped senior living businesses to stay afloat which helped operators maintain their assets and care for their residents. But it was a one-time event and is not a factor in valuations, according to Chaudhri.

Chauhri said Welltower is taking what he called a RIDEA 3.0 approach, a new spin on the REIT Investment Diversification and Empowerment Act (RIDEA). It allows REITs to participate in net operating income. Welltower will align the interests of stakeholders. Higher revenues produce higher management fees. “It all comes down to alignment,” he said.

On the development and operations side, Bryan Schachter, CIO at Watermark Retirement Communities, said that the company brought in more capital during the pandemic and continued to grow. Watermark opened six projects last year.

Independent living is driving success. Watermark’s residents like the wellness and hospitality approach along with the multiple dining venues. The company’s new projects are 50-60% independent living, resulting in higher margins and lower cap rates. The new projects opened over the last several years have strong margins despite the labor challenges.

Transaction volume is rebounding, according to Blake Peeper, partner & co-CIO at Bridge Investment Group. “There’s opportunity to buy across the spectrum,” he said. But he cautions, valuations are asset specific depending on occupancy growth assumptions. “We don’t want to be too far ahead of that,” he noted.

Peeper doesn’t expect any compression of cap rates until occupancies stabilize, though the company’s portfolio has seen an uptick in occupancies. That mirrors national trends. Demand increased by 21,029 units in the NIC MAP® Primary Markets in the third and fourth quarters of 2021, the strongest two-quarter unit increase since NIC MAP Vision began reporting the data in 2005. 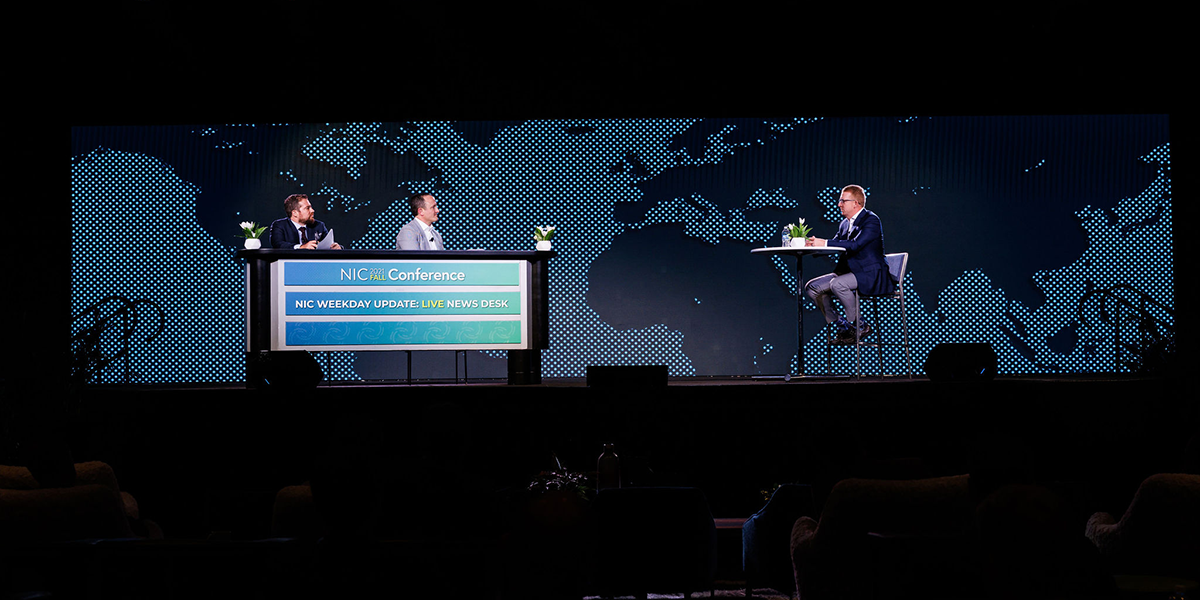 Staffing remains a concern, Peeper said, especially around the uptick in overtime and the cost of labor from third-party agencies. “Clearly the overall ability to attract and retain talent is key,” he said.

For skilled nursing, Jason Dopoulos said newer assets are trading in the 10-11% cap rate range. Dopoulos is managing principal at White Oak Healthcare Partners, a non-bank lender. When funding deals, the company focuses on the operator. Does it have other operations in the state? Can it attract staff and access supplies? What is the operator’s incentive? “We dig into operations,” he said. “Property managers have woken up to the value they add.”