Skilled Nursing Occupancy Continued to Be Challenged in January 2021

Occupancy continued to be challenged as the industry navigated the first month of 2021. Skilled nursing property occupancy fell to a new low of 71.2%, placing it 46 basis points below December 2020 (71.7%), 13.8 percentage points below pre-pandemic levels of February 2020 (85.0%), and 13.7 percentage points below year-earlier levels. The COVID-19 pandemic has significantly impacted census at skilled nursing properties due to many challenges including the vulnerable population living in the properties, local and state level regulatory restrictions, and a significant decrease in hospital referrals. The occupancy trend was consistent across geographies as both urban and rural occupancy rates declined from December (47 basis points to 72.2% in urban areas and 29 basis points to a record low of 69.4% in rural areas). While rural and urban areas continue to face very low occupancy levels, vaccination clinics in most skilled nursing properties and the recent relaxation of some CMS visitation guidelines may support some stability in occupancy in the coming months. 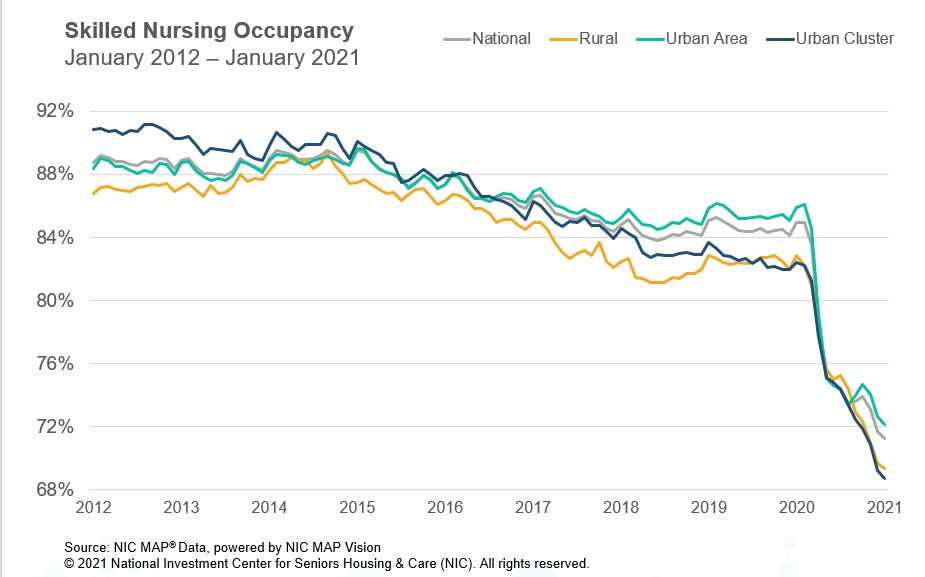 Medicare revenue per patient day (RPPD) declined from December 2020 to January 2021 ending the first month of the new year at $552. However, it is up since March 2020 when the RPPD was $549. There has been federal government support for Medicare fee-for-service reimbursement such as higher rates to help care for COVID-19 positive patients requiring isolation. However, that has been becoming less relevant as case counts have declined sharply at skilled nursing properties since the vaccine rollout in December. Medicare RPPD increased 0.3% compared to a year ago. Meanwhile, Medicare revenue mix continued to increase reaching its highest level since March of 2018. It increased 61 basis points from December to January, ending at 24.1%. Medicare revenue mix has held up relatively well since the pandemic began in March 2020, compared with other payor types. It is up 247 basis points since March compared to managed Medicare (down 16 basis points to 10.3%) and private (down 255 basis points to 5.8%). 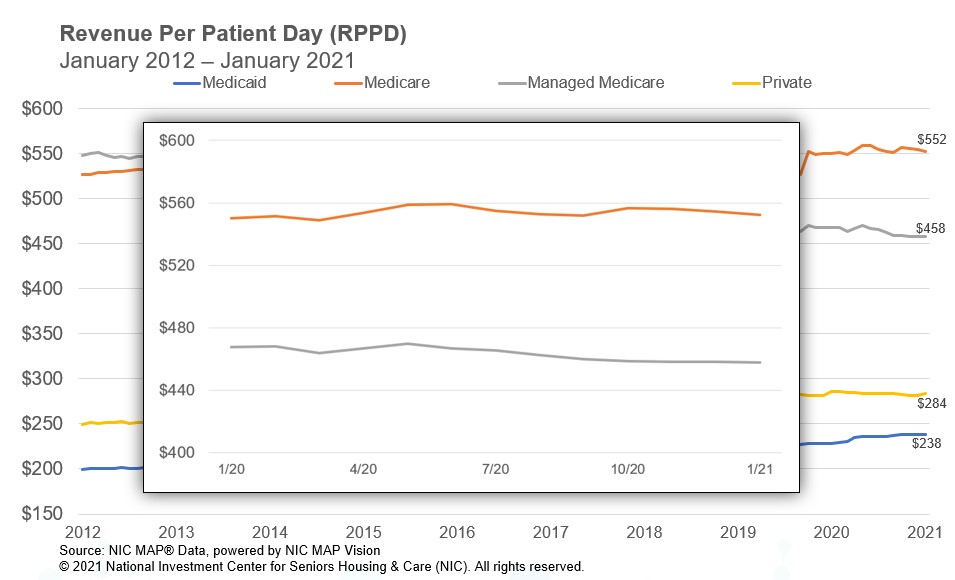 Managed Medicare RPPD hit a new low of $458 in January. Early in the pandemic managed Medicare RPPD increased from March to May 2020 but has since resumed the trend of monthly declines. It is down 2.1% since January 2020 and has declined 16% since January 2012. Managed Medicare patient day mix increased from December, up 81 basis points and stood at 7.7% in January after hitting a low during the pandemic of 5.4% in May. In addition, it was up 82 basis points from year-earlier levels. The increase since May of 2020, and the increase in the first month of 2021, suggests managed Medicare is playing an increasing role in overall operations but this is all in the context of a significant decline in occupancy. Managed Medicare admissions likely continue to be significantly below levels prior to the start of the pandemic.

Medicaid revenue per patient day increased slightly from December ending January 2021 at $238. However, that represents a 3.5% increase since March 2020 when the pandemic started, and it is up 4.2% from one year ago as many states embraced measures to increase reimbursement related to the number of COVID-19 cases. However, covering the cost of care for Medicaid patients is still a major concern as reimbursement does not cover the basic cost of patient care and services in many states. In addition, nursing home wage growth is elevated relative to inflation and staffing shortages are a significant challenge in many areas of the country. Expectations are that wage growth will remain elevated as staffing challenges remain an operational hurdle due to turnover and competition for labor in other industries.

To get more trends from the latest data you can download the Skilled Nursing Monthly Report here. There is no charge for this report.

The report provides aggregate data at the national level from a sampling of skilled nursing operators with multiple properties in the United States. NIC continues to grow its database of participating operators in order to provide data at localized levels in the future. Operators who are interested in participating can complete a participation form at https://www.nic.org/skilled-nursing-data-initiative. NIC maintains strict confidentiality of all data it receives.