“After increasing in February and March, occupancy was flat in April. Labor is still a serious challenge within the industry and some operators are still unable to admit new patients due to staffing shortages.”

Skilled nursing occupancy was flat for the month of April. Skilled nursing property occupancy held steady at 77.3%. However, occupancy has increased 140 basis points since January 2022 as demand seemingly picked up after the Omicron variant subsided. In addition, occupancy has increased 524 basis points since the low of 72.1% in January 2021 and remains at the highest occupancy level since April 2020, in the beginning of the pandemic. Although occupancy has increased in recent months, it is still down considerably (8.9 percentage points) compared to February 2020 before the beginning of the pandemic. There are some positive signs given the increases in occupancy since the low, but many challenges remain including labor shortages, operating expense pressure, and the proposal to claw back Medicare reimbursement as it relates to the Patient Driven Payment Model (PDPM). 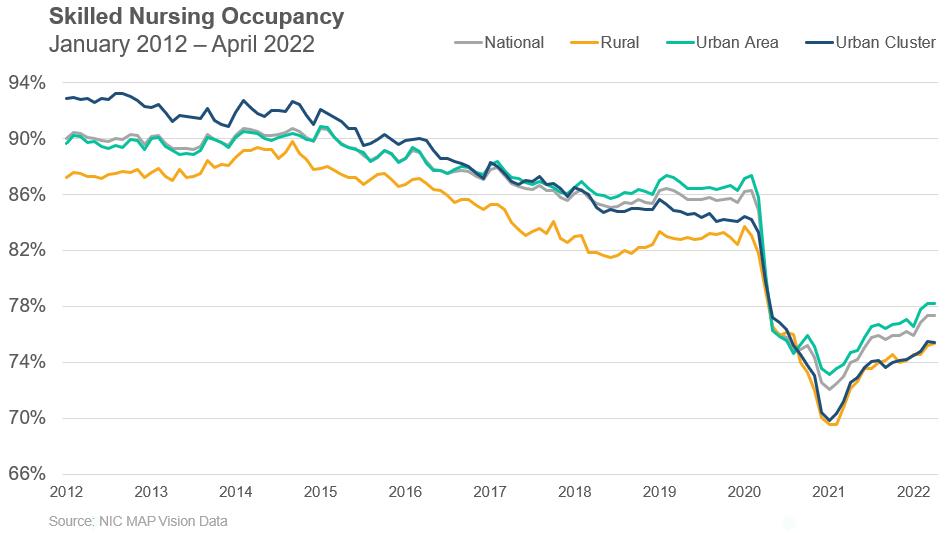 Medicare revenue mix declined in the month of April. Decreasing for a second month in a row, Medicare revenue mix declined 72 basis point to end April at 20.6%. After increasing to start 2022, from December 2021 (20.6%) to January 2022 (24.4%), it has now decreased 397 basis points from the 2022 high (24.6%) set in February. The increase to start 2022 was likely due to the elevated number of COVID-19 cases in January and suggests there was a significant uptick in the utilization of the 3-Day Rule waiver as COVID-19 cases increased. The 3-Day Rule waiver was implemented by Centers for Medicare and Medicaid Services (CMS) to eliminate the need to transfer positive COVID-19 patients back to the hospital to qualify for a Medicare paid skilled nursing stay, hence increasing the Medicare census at properties. As cases declined, the Medicare revenue share has declined as well. Meanwhile, Medicare revenue per patient day (RPPD) decreased for the third month in a row to end April at $568. This suggests that due to decreasing COVID-19 cases there was less additional reimbursement needed for COVID-19 positive residents, who require additional measures of care to be implemented.

Medicaid patient day mix increased for the second month in a row. It increased 79 basis points in April to end the month at 66.0%. It has increased in a similar trend as Medicaid revenue as it also increased for second month in row. Medicaid revenue mix increased 243 basis points from March to end April at 50.7%. Some of this increase is related to what was mentioned above, regarding the decline in COVID-19 cases from January and patients have now moved from Medicare patient days back to Medicaid, after utilizing the 3-Day Rule waiver. Meanwhile, Medicaid revenue per patient day (RPPD) increased from March to end April 2022 at $247. It is up 3.3% from the pre-pandemic period (February 2020) as many states embraced measures to increase reimbursement related to the number of COVID-19 cases to support skilled nursing properties, in addition to fiscal year increases.

Get more trends from the latest data by downloading the Skilled Nursing Monthly Report. There is no charge for this report.

The report provides aggregate data at the national level from a sampling of skilled nursing operators with multiple properties in the United States. NIC continues to grow its database of participating operators to provide data at localized levels in the future. Operators who are interested in participating can complete a participation form. NIC maintains strict confidentiality of all data it receives.