Key takeaways from the report are available below.

Skilled nursing property occupancy continued to be pressured through year-end 2020, hitting a new low of 71.7% in December. This was down 1.4 percentage points from November (73.1%) and 13.3 percentage points from February 2020 (84.9%), the month before the pandemic started. The pandemic has significantly impacted skilled nursing operations across the country creating challenges for patient census. However, since the vaccine rollout began in December and continues to date, there is an expectation that COVID-19 cases will continue to decline, and occupancy will pick up. The question remains, however, of how quickly this bounce back will occur. 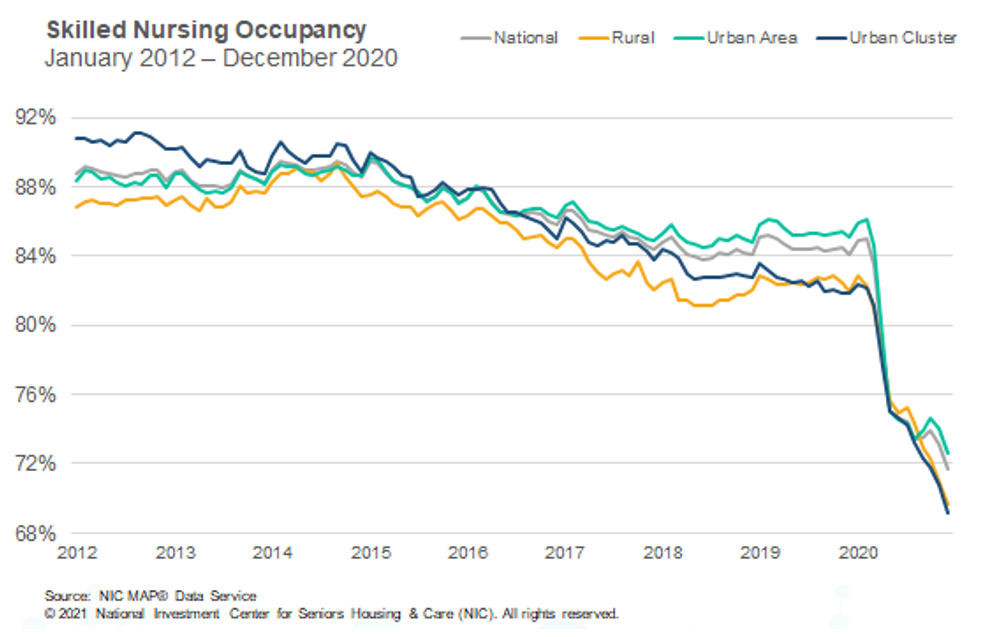 Managed Medicare patient day mix increased 41 basis points from November to 6.9% after hitting a 12-month low during the pandemic of 5.4% in May. However, it was down 24 basis points since February (7.1%). The increase since May suggests managed Medicare is playing an increasing role in overall operations, but this is all in the context of a significant drop in occupancy. Managed Medicare admissions are likely significantly below levels prior to the start of the pandemic given the decline in elective surgeries and competition from home health care. In addition, managed Medicare revenue mix was off its 12-month low of 8.0% set back in May. As of December, it was at 8.8% but down 230 basis points since February.

Medicare revenue mix continued to increase as 2020 closed, ending at 23.3% in December and up 67 basis points from November. Medicare revenue mix has held up relatively well since the pandemic began in March compared with other payors. It is up 186 basis points since March compared to managed Medicare (down 150 basis points) and private pay (down 254 basis points). As overall occupancy has declined dramatically during the pandemic creating significant pressure on skilled nursing operators, Medicare patient days likely did not decrease as much as they would have given that the Centers for Medicare and Medicaid Services (CMS) waived the 3-Day Rule. The rule waives the requirement for a 3-day inpatient hospital stay prior to a Medicare-covered skilled nursing stay. 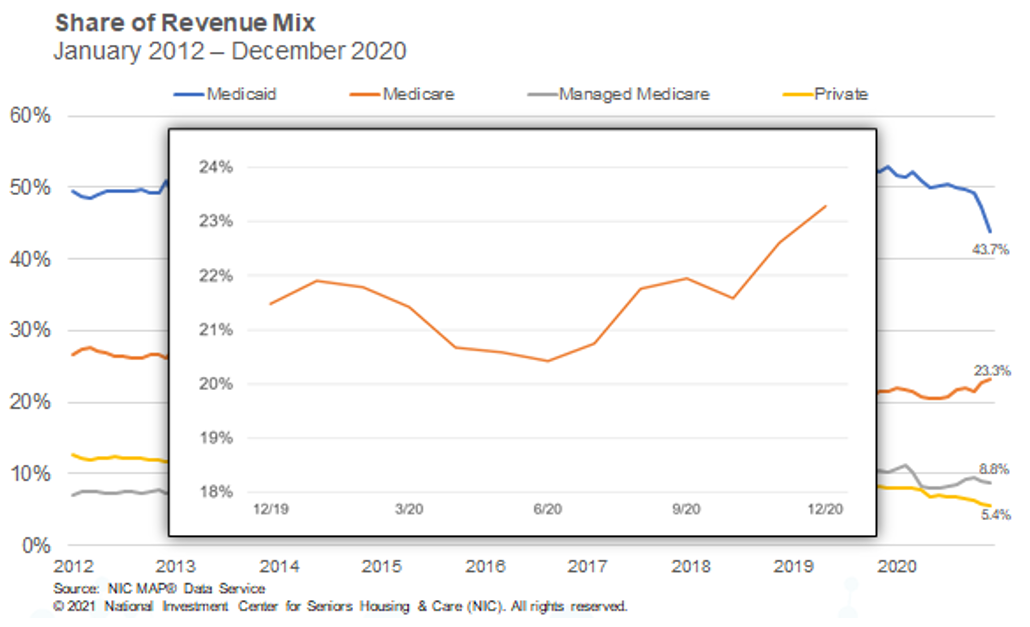 In contrast to the Medicare experience, Medicaid revenue mix hit a new low in December, ending at 43.7%. It has decreased 8.4 percentage points since March when it was 52.2%. This suggests total Medicaid patient days have dramatically decreased since March, due to lower overall admissions and some Medicaid patients who may have converted to Medicare due to the waiver of the 3-Day Rule during this crisis period. Medicaid revenue mix was down 9 percentage points from year-earlier levels.

To get more trends from the latest data you can download the Skilled Nursing Monthly Report here. There is no charge for this report.