The nursing care occupancy rate continued to be depressed at 74.7% in October 2020 as the COVID-19 pandemic continued to take a toll. The occupancy rate edged up 40 basis points from September’s level of 74.3%, but it was still down 9.1 percentage points since the pandemic began in March (83.8%), 10.5 percentage points since February (85.2%), and 9.9 percentage points from year-earlier levels (84.7%). The occupancy trend varied across geographies as urban areas saw a 70-basis point increase from September to October, but rural areas experienced a 23-basis point decline. However, both rural and urban areas are experiencing unprecedented low occupancy levels due to COVID-19. Achieving stabilized occupancy will be a challenge as the pandemic enters a third wave and as the vaccine begins to be distributed. 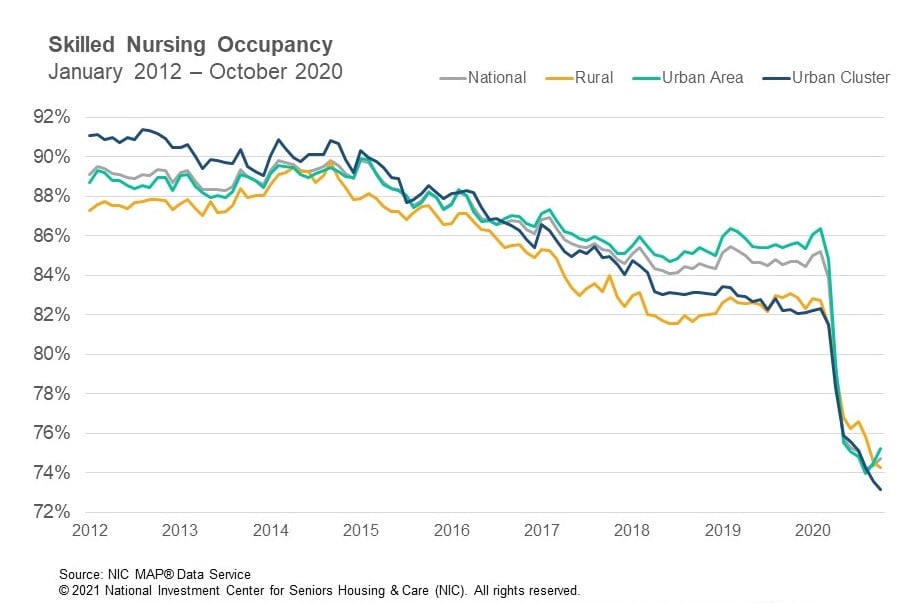 Medicare patient day mix decreased 21 basis points from 12.4% in September to 12.2% in October. However, it is up 79 basis points since March (11.4%). In addition, Medicare revenue mix also decreased from September to October, falling 51 basis points. When compared to overall occupancy, Medicare patient days have been impacted as have all payor types, as many referrals to skilled nursing properties have been limited due to the pandemic. However, Medicare patient days likely did not decrease as much as they may otherwise had been because the Centers for Medicare and Medicaid Services (CMS) waived the 3-Day Rule, which removes the requirement for a 3-day inpatient hospital stay prior to a Medicare-covered skilled nursing stay. This change enables more patient days to be covered by Medicare, which can have a positive impact on cash flow, all else equal.

Managed Medicare revenue mix increased slightly from September to October (16 basis points) to 9.1% but has declined 174 basis points since February and 75 basis points from year-earlier levels. As skilled nursing occupancy continues to remain depressed and many insurance plan enrollees are being cared for at home after surgeries, the October data suggests that Managed Medicare admissions remain far below the levels seen prior to the pandemic, even after elective surgeries were resumed. In addition, some managed Medicare patients may still be hesitant to have surgery if the recovery requires a skilled nursing stay. Expectations are that admissions will take some time to rebound due to competition from home health as well as other factors. 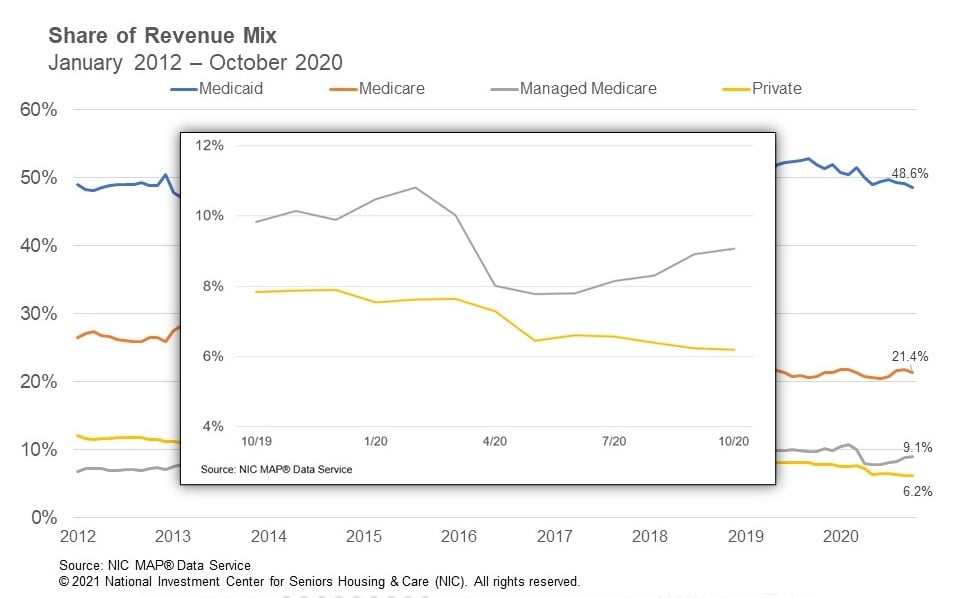 To get more trends from the latest data you can download the Skilled Nursing Monthly Report at here. There is no charge for this report.

The report provides aggregate data at the national level from a sampling of skilled nursing operators with multiple properties in the United States. NIC continues to grow its database of participating operators in order to provide data at localized levels in the future. Operators who are interested in participating can complete a participation form at nic.org/skilled-nursing-data-initiative. NIC maintains strict confidentiality of all data it receives.