Skilled Nursing News’ Payments, Policy, and Capital Summit brought together executives, policy professionals, and capital providers to share their thoughts on the recent past, present, and future of the skilled nursing industry. Highlights and key takeaways from the three-day virtual event are summarized here.

The summit included sessions on capital and one main topic of discussion was private equity and skilled nursing. In regard to investor interest in skilled nursing, private equity has been the bright spot in terms of buying skilled nursing properties even as the sector endured its most challenging year on record in 2020. One theme, however, has been the flight to quality as investors are interested in the best operators and properties in order to mitigate risk when allocating new capital. Private equity is still excited about the opportunity in the future as long-term care needs will remain given the fact that a very large population will be very sick with multiple illnesses and will not be able to afford private pay assisted living and unable to receive care in the home 24 hours a day.

However, in the short-term private equity does have concerns given the challenges, hence the flight to quality operators and properties. Indeed, the difficulty in operations continues. Skilled nursing occupancy was at 74.2% as of November 2020 based on data from the NIC Skilled Nursing Data Initiative, representing a 11.2 percentage point drop from February 2020.

Despite the operational challenges, some owner/operators and families with plentiful capital have been the main buyers throughout the pandemic. In fact, according to preliminary fourth quarter 2020 data from NIC/RCA private buyers closed on $4.2 billion worth of seniors housing and care transactions for the year of 2020, which represented 57% of the volume. In addition, and perhaps an example of the flight to quality, skilled nursing (nursing care in the graph below) property price per bed has held firm according to NIC/RCA price per bed data (see graph below for details and sources). This pricing trend below is a national rolling four-quarter measure and it is not same-store; the mix of properties could impact the results. However, it does reflect what is trading in the market albeit with relatively lower transactions closed in 2020 due to the pandemic. 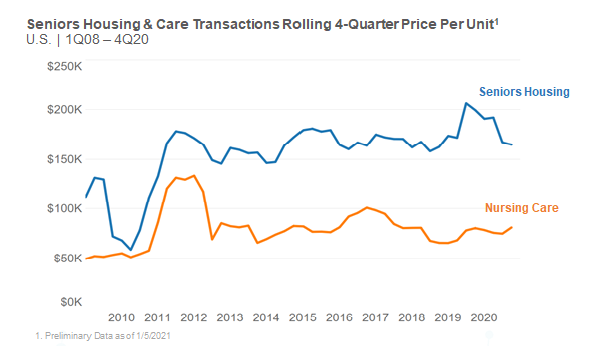 One of the comments made during the summit was that there were many transactions closed over $100,000 price per bed. So, what does this say as price per bed holds firm during this time of crisis? For one, the properties trading could be higher quality with good operators, as stated previously. In addition, there is still a very attractive expected spread in terms of the interest rates on debt and the expected long-term cash flow of a high-quality property, which may be supporting price levels.

Also, it was mentioned during the summit that government support has been a positive and private equity may be reassessing the “stroke-of-pen risk,” which is the risk that reimbursement rates are cut by the government. However, given the support of government funds during the pandemic investors may reassess the risk of government involvement as it has helped the sector stay afloat during this particular crisis. Lastly, there are some small private investors, owners and/or operators looking to expand regionally and have strong long-term views about the sector.

Much of the investor interest discussion, and the success of the sector, was certainly based on the quality operators but much of that quality is based on top talent and staff. It was mentioned that staff turnover was a top leading indicator of a successful operation before the pandemic and the belief is that is still the case. Staffing will continue to be a challenge now and after the pandemic and it should be a priority for both investors and operators alike to ensure the proper staffing is in place for all stakeholders.

As for what to expect on the policy and regulatory front, panelists covered labor and workforce topics such as the potential increase in minimum wage and mandatory staffing ratios, as well as what the future holds for PDPM, value-based purchasing, and risk-sharing models.

The Path to a $15 Minimum Wage

There are several states where a significant portion of the CNAs make less than $15 per hour – often starting at $9 or $10 per hour depending on market. With the new administration, there is certainly more discussion around a $15 minimum wage, which is a concern for many operators. As you might expect, states with the lowest CNA wages are the states that have really low Medicaid rates. As a result, providers simply do not have the resources to pay more than they are paying. Mark Parkinson, President & CEO, AHCA/NCAL emphasized that “if you do the minimum wage, you have to create a Medicaid mechanism that helps these states to pay for these wage increases.”

The upcoming stimulus bill will be passed with the reconciliation procedure, which requires only 51 votes. As a result of passing through reconciliation, there are only certain things that can be included in the bill, and currently, the prevailing view is that a minimum wage increase cannot legally be included. There is still a slim chance it’s ruled that the minimum wage increase can be included in the bill, but even if that is the case, it’s not clear that all Senate Democrats would vote for it. Additionally, the Biden proposal on minimum wage does increase the minimum wage to $15 per hour, but it is done with a gradual, phased approach, meaning the $15 wage would not be realized until 2025.

Other Regulatory Implications to Staffing

There’s good data available that indicates buildings with significant amounts of RN coverage, relative to buildings that didn’t, fared better with regards to COVID-19 cases and deaths. This may mean that there could be minimum staffing requirements established for the skilled nursing sector. Less likely, but still possible, could be including infection control experts within each of these sites as well. The caveat to successful implementation of these staffing minimums, however, is that these need to be funded under Medicaid for operators to be able to actually execute on these.

Enforcement – What Will be Scrutinized?

Given that nominated HHS Secretary Xavier Becerra is an Attorney General, it’s almost inevitable that oversight of skilled nursing will increase. One of the first things Seema Verma, former CMS Administrator, did was to issue a proposal that slowed down much of the requirements of participation that she felt had gone too far. The proposed rule was never finalized, and it is unlikely the Biden administration will finalize the rule.

There was a noticeable drop in civil monetary penalties (CMPs) under the Trump administration, but there may be pressure to get them back to where they were under the Obama administration. Right now, without an identified CMS Administrator and several important positions at CMS still open, there are a lot of unknowns, but that is likely to be on the table. The Biden administration is also going to take a close look at arbitration to see what can be done to decelerate its use.

There’s going to be a real push by the states to get rid of multi-resident rooms, specifically those that house 3 or 4 residents in a single room. This was brought to light as particularly problematic during the pandemic and private rooms are not only important for infection control, but also for quality of life and resident satisfaction as well.

The Patient Driven Payment Model - PDPM - has been one of the bright spots for the skilled nursing sector over the last year and a half. Despite concerns that the new payment system was not budget neutral, there were no substantive changes made to PDPM in 2020. This was in large part due to the COVID-19 pandemic overshadowing the concerns that some may have had about PDPM, and that may wind up being the case for 2021 as well. At some point the dust is going to settle and CMS will look again at the budget neutrality of PDPM.

There are some reasonable arguments to be made that could protect the gains that were realized under PDPM. First and foremost is that, as a whole, Medicare spending was down in 2020. Taking a step back and looking at the overall system puts PDPM in a better light.

With the COVID-19 pandemic taking the full focus of the skilled nursing sector in 2020 and continuing into 2021, discussions about value-based purchasing and unified payments systems were not as prominent as they had been in the past. Once the pandemic is finally behind us, however, these conversations will once again become a more pressing topic.

As Scott Pilgrim, CEO, Diakonos Group points out, skilled nursing operators can secure additional Medicaid dollars, but must promise increased quality in return. Pilgrim notes that there are four mechanisms to increasing reimbursement rates under Medicaid and that policymakers see value in tying value-based purchasing to each of these four levers: base-rate increases, add-on rates, provider tax implementation, and inter-governmental transfer programs.

Medicare Advantage continues to grow, and that will continue to be the case. Market share for Medicare Advantage is approximately 35% and increasing each year by another 1%. I-SNPs provide an incredible incentive for operators to keep residents healthy. The COVID-19 situation was an incredibly difficult situation to navigate for I-SNPs, especially to those in the northeast. They were responsible for the entire risk of these residents, and in some cases were responsible for massive hospitalization bills. In other parts of the country, even with COVID, I-SNPs had done reasonably, as other medical expenses were down so much. All that being said, it’s clear that when the pandemic is finally behind us, risk-sharing type of arrangements are going to be an absolute must for providers that want to thrive.

Listening to all the potential policy and regulatory changes on the horizon made it clear: calls to reform post-acute and long-term care following the COVID-19 public health emergency, along with a new Presidential administration, mean the climate is ripe for potential regulatory changes to be implemented.