According to the most recent CMS data compiled by NIC’s Skilled Nursing COVID-19 Tracker, 4.8% of skilled nursing facilities (SNFs) reported newly confirmed cases among residents for the week ending August 1, 2021. Half of these facilities had a vaccination rate among staff below 49%, which is 12 percentage points below the national average rate of staff fully vaccinated (60.7%) according to NIC’s Skilled Nursing Covid-19 Tracker. As has been reported elsewhere, the pandemic is likely not over for the unvaccinated. Unfortunately, this includes skilled nursing facilities with low vaccination rates among staff and residents according to analysis by NIC.

With the Delta variant changing the narrative once again by fueling the resurgence in COVID-19 cases in the U.S. and pushing parts of the country with low vaccination coverage into a new wave of the COVID-19 pandemic, the per-resident rate of new COVID-19 infections within SNFs rose to 0.18%, meaning that 18 in 10,000 residents tested positive on August 1. This is equivalent to six times the rate reported on June 20 (0.03% - 3 in 10,000 residents tested positive) but is also well below the peak of 3.06% (306 in 10,000 residents tested positive) reached in December of 2020. Moreover and notably, overall case counts within SNFs relative to cases among the general population remained low compared with the high share of cases seen in SNFS in the fall of 2020 wave prior to the vaccine rollout.

For the week ending August 1, the South region alone accounted for about 68% of newly confirmed cases within all U.S. skilled nursing facilities. In the span of six weeks, virus cases among SNFs residents in the South region went from 97 cases on June 20 to 1,340 cases on August 1, up 1,281%. This is partly due to increasing Delta variant cases among the general population in the South (up 888% between the weeks ending June 20th and August 1st), specifically in Texas and Florida.

Exhibit 1 below depicts vaccination stats and infection rates by region. Notably, the South region had the lowest rate of residents and staff fully vaccinated against COVID-19 at 79.2% and 54.4%, respectively. At 54.4%, the South region vaccination rates among staff remained far below the national average (60.7%). On the other hand, SNFs in the West and Northeast regions had above national average rates of staff fully vaccinated at 72.0% and 67.8%, respectively.

Looking closely at states in the South region with low vaccination rates and increasing virus cases, Florida newly reported cases among the general population reached record highs on August 1. In six weeks, weekly cases in Florida jumped over 1000%, from nearly 11,000 on June 20 to over 120,000 cases on August 1 and continued to climb through the week ending August 8, according to CDC data compiled by NIC’s Skilled Nursing COVID-19 Tracker. Prior to the outbreak of the Delta variant, the high point for Florida was about 110,000 cases for the week ending January 10, 2021.

The worrisome spike in virus cases among the general population in Florida and the low vaccination rates within skilled nursing facilities there (72.9% of residents fully vaccinated vs. 47.1% of staff) pushed weekly cases among SNFs residents back up from 39 on June 20 to 556 on August 1, up 1326%.

Similarly, weekly cases among the general population in Texas increased by about 640%, from over 8,300 on June 20 to nearly 62,000 new cases on August 1, and weekly confirmed cases among SNFs residents increased at a faster pace over the same period, from 15 cases on June 20 to 235 cases on August 1 (a very large percentage increase of 1467% due to the low starting point). Again, skilled nursing facilities in Texas have one of the lowest rates of their residents and staff fully vaccinated against COVID-19 at 78.6% and 56.8%, respectively.

Vaccination rates among SNFs staff in Florida and Texas remained below national average rate of staff fully vaccinated (60.7%). These two states accounted for 40% of overall weekly cases within U.S. SNFs on August 1st.

Overall case counts within SNFs relative to cases among the general population remained low and are nowhere near levels seen in the fall of 2020 wave prior to the vaccine rollout. The notable difference in virus cases among the general population and SNFs residents between the fall 2020 variant wave and the ongoing surge of the Delta variant suggests that facilities with low vaccination rates are likely driving SNFs COVID case rise.

In early November 2020, when weekly COVID-19 case counts among the general population were about the same level as August 1, 2021 (about 600,000 cases), weekly cases among SNFs residents were about seven times cases reported on August 1, equivalent to 14,216 cases and accounting for 2.4% of overall weekly cases in the U.S. Additionally, the share of SNFs reporting newly confirmed cases among residents was about 17% on November 1, 2020. 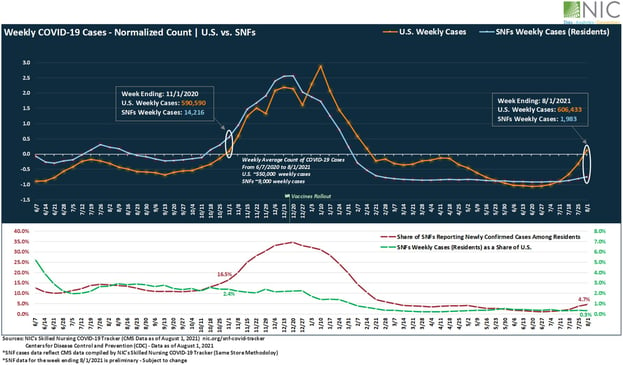 Although there have been reports of COVID-19 breakthrough cases across the U.S. and skilled nursing facilities, data corroborates vaccine effectiveness against the Delta variant. Recent studies have shown that overall effectiveness may be declining against infections but remains very strong against hospitalization and fatalities from the Delta variant. To say the least, vaccines are helping to avoid another “deadly” wave of the COVID-19 pandemic.

This upward trend in Delta variant infections is concerning and will likely persist in the coming weeks until an extremely high vaccination rate is reached. That said, U.S. vaccination rates have recently accelerated, and the U.S. will begin to offer coronavirus booster shots to raise antibody levels among at-risk adults on September 20, including residents of skilled nursing facilities and seniors housing properties.

Separately, vaccine effectiveness is also reflected in the wide dispersion in occupancy between facilities, which is somewhat tied to virus spread among residents and staff. Additionally, NIC’s Executive Survey Insights (Wave 31: July 12 to August 8, 2021) shows occupancy improvements and acceleration in the pace of move-ins. “Despite the rise in circulation of the Delta variant of the COVID-19 virus, resident demand remains the driving force behind acceleration in the pace of move-ins. Between roughly 55% and 60% of organizations report that the pace of move-ins accelerated in the past 30-days, and similar proportions report a corresponding increase in occupancy” wrote Lana Peck, Senior Principal at NIC.

Omar Zahraoui, Senior Data Analyst at the National Investment Center for Seniors Housing & Care (NIC), is a seniors housing research professional with expertise in providing quantitative analysis and insights on seniors housing & care market data; building new products and reporting capabilities, including dashboards and proformas for clients and internal stakeholders; and implementing new processes and data solutions. Prior to his current role, Zahraoui worked as a data analyst, at Calpine Corporation, supporting the development of new-business strategy initiatives, analyzing sales and financial data, and developing statistical modeling of consumers’ behaviors to drive business performance. Zahraoui holds a Bachelor’s degree in Business Administration with concentrations in Finance and Management, a Master in Corporate Finance from IAE Lyon School of Management at Jean Moulin Lyon III University in France, and a Master of Science in Management Information Systems and Data Analytics from Pace University.