The Labor Department reported that nonfarm payrolls rose by 266,000 in April.  This was a sharp slowdown from the downwardly revised gain of 770,000 in March, originally reported as 916,000. The consensus estimates for April had been for a gain of 1,000,000. Despite the April increase, job levels remain 8.2 million below the pre-pandemic levels of February 2020. 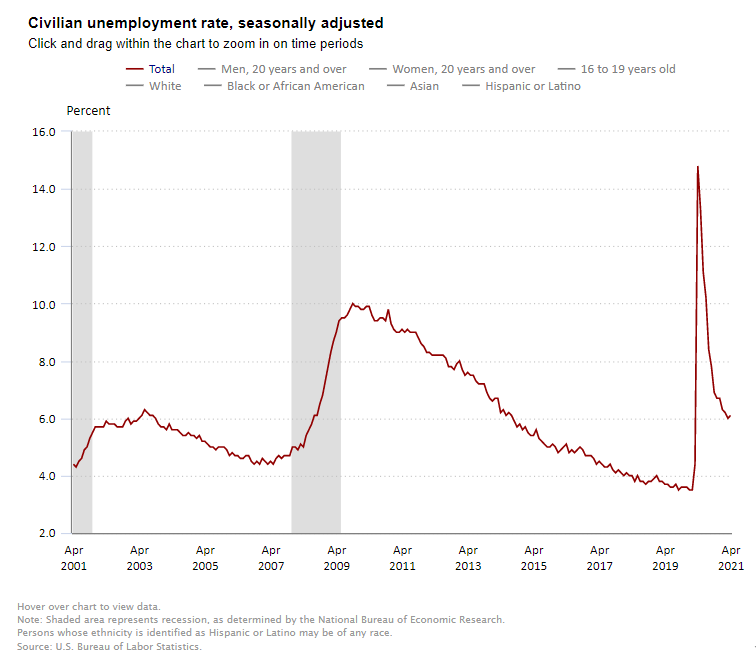 Separately and from a separate survey, the Labor Department reported that the unemployment rate edged up to 6.1% from 6.0% in March. The jobless rate is now 2.6 percentage points above the pre-pandemic level of 3.5% seen in February 2020, but well below the 14.7% peak seen in April.

The underemployment rate or the U-6 jobless rate was unchanged at 10.4% down from 10.7% in March. This figure includes those who have quit looking for a job because they are discouraged about their prospects and people working part-time but desiring a full work week.

The labor force participation rate, which is a measure of the share of working-age people who are employed or looking for work was steady at 61.7% in April but is 1.6 percentage points lower than in February 2020. Many workers have dropped out of the labor force since the pandemic began to take care of family members or out of fear of working and catching the virus.

Average hourly earnings for all employees on private nonfarm payrolls rose by $0.21 in April to $30.17, a gain of 0.3% from a year earlier. This was well below the 4.2% annual gain recorded in March. Notably, however, the pandemic has affected the ability to fully interpret the wage data due to the wide swings in employment trends.

The change in total nonfarm payroll employment for February was revised down up by 68,000 from a gain of 468,000 to 536,000 and the change for March was revised down by 146,000 from 916,000 to 770,000. With these revisions, employment in February and March combined is 78,000 lower than previously reported. Monthly revisions result from additional reports received from businesses and government agencies since the last published estimates and from the recalculation of seasonal factors. 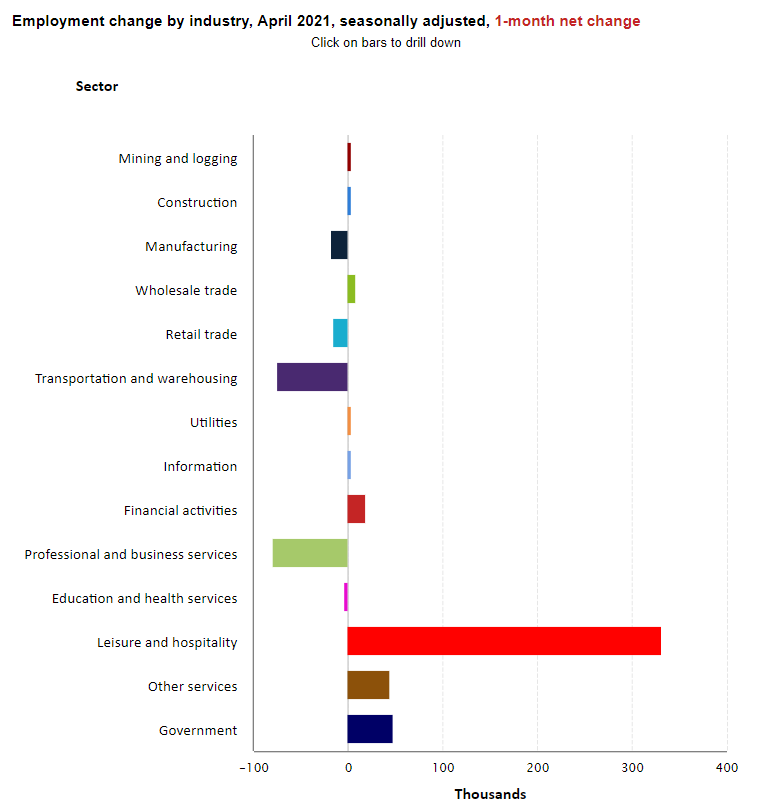 The April data was disappointing after such robust gains in recent prior months. It may reflect ongoing health-related concerns about the pandemic and the need for workers to still take care of family members, especially school-aged children. That said, the ongoing drop in COVID cases, the widespread distribution of vaccines, and a shift in consumer confidence should support a more complete re-opening of the economy and a fuller recovery in jobs in the coming months. The weak April number also suggests that the Fed will continue in its resolve to not alter its stated monetary policy goals and will keep its bond-buying program intact and interest rates low as it pursues its full employment goal.