The first Friday of the month at 8:30 ET is widely anticipated as the Labor Department presents a fresh gauge of the most recent economic performance in its release of the labor report for the prior month. Today’s number was even more closely watched since it indicates how quickly the economy is bouncing back from the year-long pandemic. In its release, the Labor Department reported that nonfarm payrolls rose by 916,000 in March and that the unemployment rate edged lower to 6.0% from 6.2% in February. The jobless rate remains 2.5 percentage points above the pre-pandemic level of 3.5% seen in February 2020, but well below the 14.7% peak seen in April. Despite the February increase, job levels are 8.4 million (5.5%) below the pre-pandemic levels of February 2020. The consensus estimates for February had been for a gain of 660,000.

Private service-producing jobs increased by 780,000, led by a rise of 280,000 jobs in leisure and hospitality payrolls as pandemic-related restrictions began to be relaxed and restaurants re-openings occurred. The resumption of in-person learning translated into a combined 190,000 increase in state, local government, and private education employment. Health care added 11,500 jobs in March. Within healthcare, nursing care facilities gained 1,700 jobs in March. 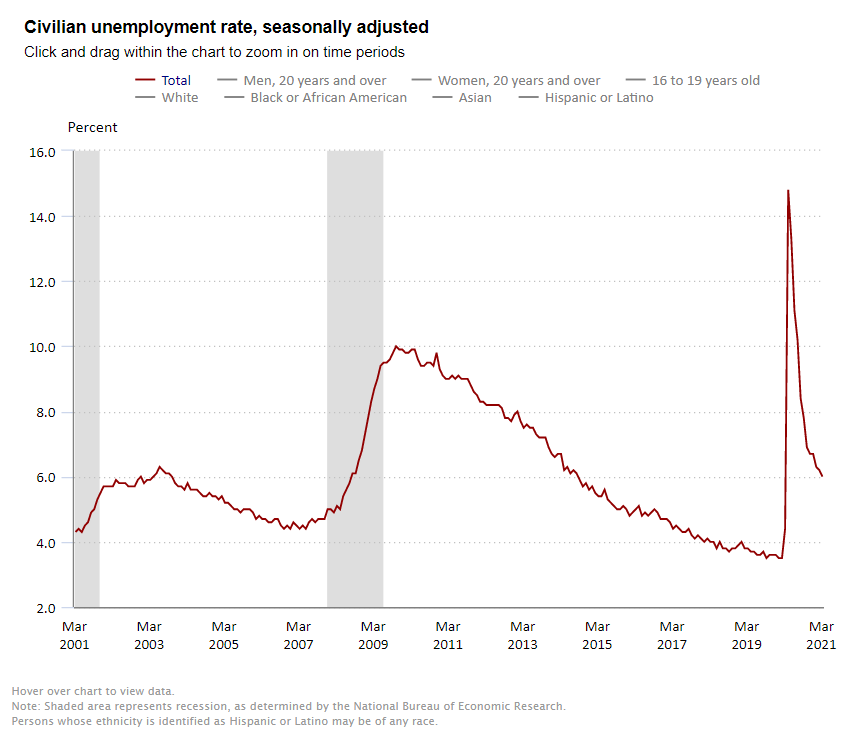 The underemployment rate or the U-6 jobless rate was 10.7% versus 11.1% in February. This figure includes those who have quit looking for a job because they are discouraged about their prospects and people working part-time but desiring a full work week.

Average hourly earnings for all employees on private nonfarm payrolls fell by $0.04 in March to $29.96, a gain of 4.2% from a year earlier. This was down from an annual gain of 5.2% in February.

The labor force participation rate, which is a measure of the share of working age people who are employed or looking for work was steady at 61.5% in March, up from 61.4% in February.

The change in total nonfarm payroll employment for January was revised up by 67,000 from a 166,000 to 233,000 and the change for February was revised up by 89,000 from 379,000 to 468,000. Combined, 156,000 jobs were added to the original estimates. Monthly revisions result from additional reports received from businesses and government agencies since the last published estimates and from the recalculation of seasonal factors. 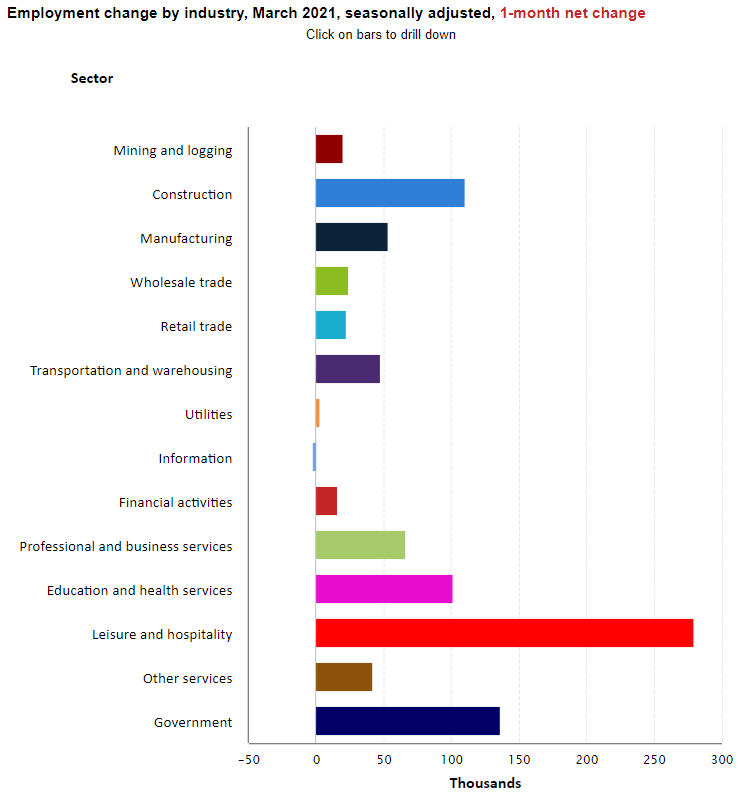 The March data is promising and reflects a re-opening of the economy. The ongoing drop in COVID cases, the widespread distribution of vaccines, and a shift in consumer confidence will allow for a more complete re-opening of the economy and a fuller recovery in jobs in the coming months. The next round of fiscal stimulus will provide a further boost to economic activity and allow the second half of 2021 to be very strong.