The supply of labor as measured by the labor force rose by 168,000 in December, while household measure of employment rose by more than 651,000 in December. These factors pushed the jobless rate lower to 3.9%. This rate is below the Fed’s estimate of its longer-term unemployment equilibrium level.

Concerns about rising wage costs are supported by this report. Average hourly earnings for all employees on private nonfarm payrolls rose by $0.19 in December to $31.31, a gain of 4.7% from a year earlier. 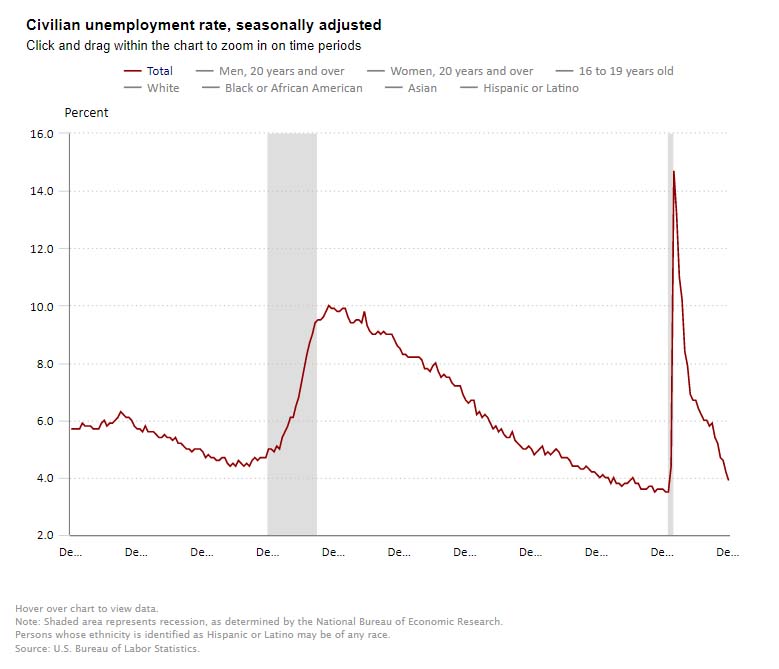 The household survey data supports the Fed’s view that the labor market is at or close to maximum employment and will provide further evidence that a shift in monetary policy away from being accommodative to a more restrictive stance is appropriate. Indeed, at its most recent and final meeting of the year in December, the Fed changed course sharply as it shifted away from dovish policies of low interest rates and Quantitative Easing (QE) to support overall growth to one that is more hawkish to deliberately fight inflation by slowing its monthly bond buying program and raising interest rates. Reflecting this new tone, it is likely that the Fed will raise short-term interest rates in 2022, possibly three times and further in 2023. The Fed’s bond buying program will also “taper” much more quickly than initially announced, meaning that purchases could now end in February 2022 or sooner, thereby doing less to stimulate the economy which would theoretically and eventually slow price gains as demand wanes. The exact timing depends upon when officials judge the labor market is back at “maximum employment,” with Fed Chair Jerome Powell arguing that the economy has made “rapid progress” towards that goal. The December jobs report will add evidence that this goal has been achieved or is very close to being achieved.

The potential negative impact of the newly identified omicron variant on jobs is likely not reflected in the December data because the survey week occurred prior to the big surge in omicron-linked cases. But the data show that the labor market continues to be affected by the delta variant especially in the service sector. Indeed, leisure and hospitality payrolls edged up by a muted 54,000, following large gains of 200,000 per month earlier in the year. 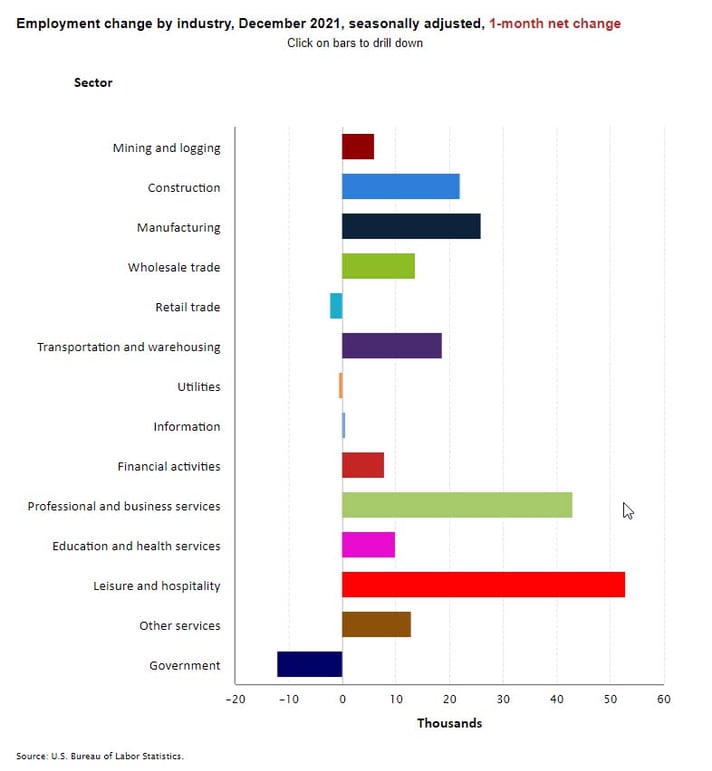 Health care lost 3,100 jobs in December. And within health care, nursing and residential care facilities lost 6,100 jobs. Losses were offset by gains in residential mental health facilities. Jobs have been on the decline in nursing care since 2011.

The underemployment rate or the U-6 jobless rate was 7.3%, down from 7.7% in November 2021. This figure includes those who have quit looking for a job because they are discouraged about their prospects and people working part-time but desiring a full work week.